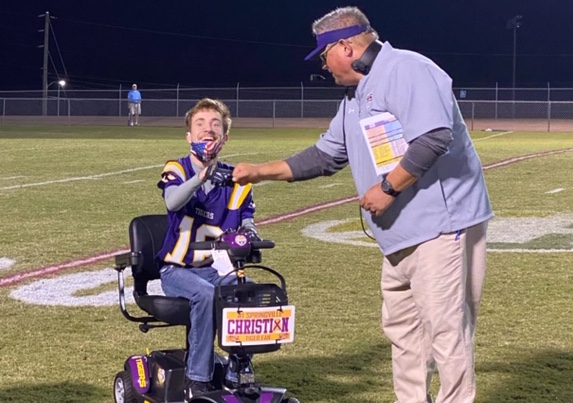 His beloved Springville Tigers took the field for their second home game of the season, and perhaps no one in the house cheered harder as the rain fell and the Tigers drove.

Little did he know the attention would turn to him between the first and second quarters of play. Dickert, a Springville super fan who has Cerebral Palsy, was surprised with a new scooter thanks to funds raised by the school’s cheer and football programs.

Head coach Michael Grabin walked out to the 25-yard line and offered up a fist bump as Dickert saddled up on his new ride. The crowd cheered and the players clapped for their biggest supporter.

His old scooter frequently broke down; a thing of the past thanks to the new model — a purple and gold-painted profession of his love for SHS sports.