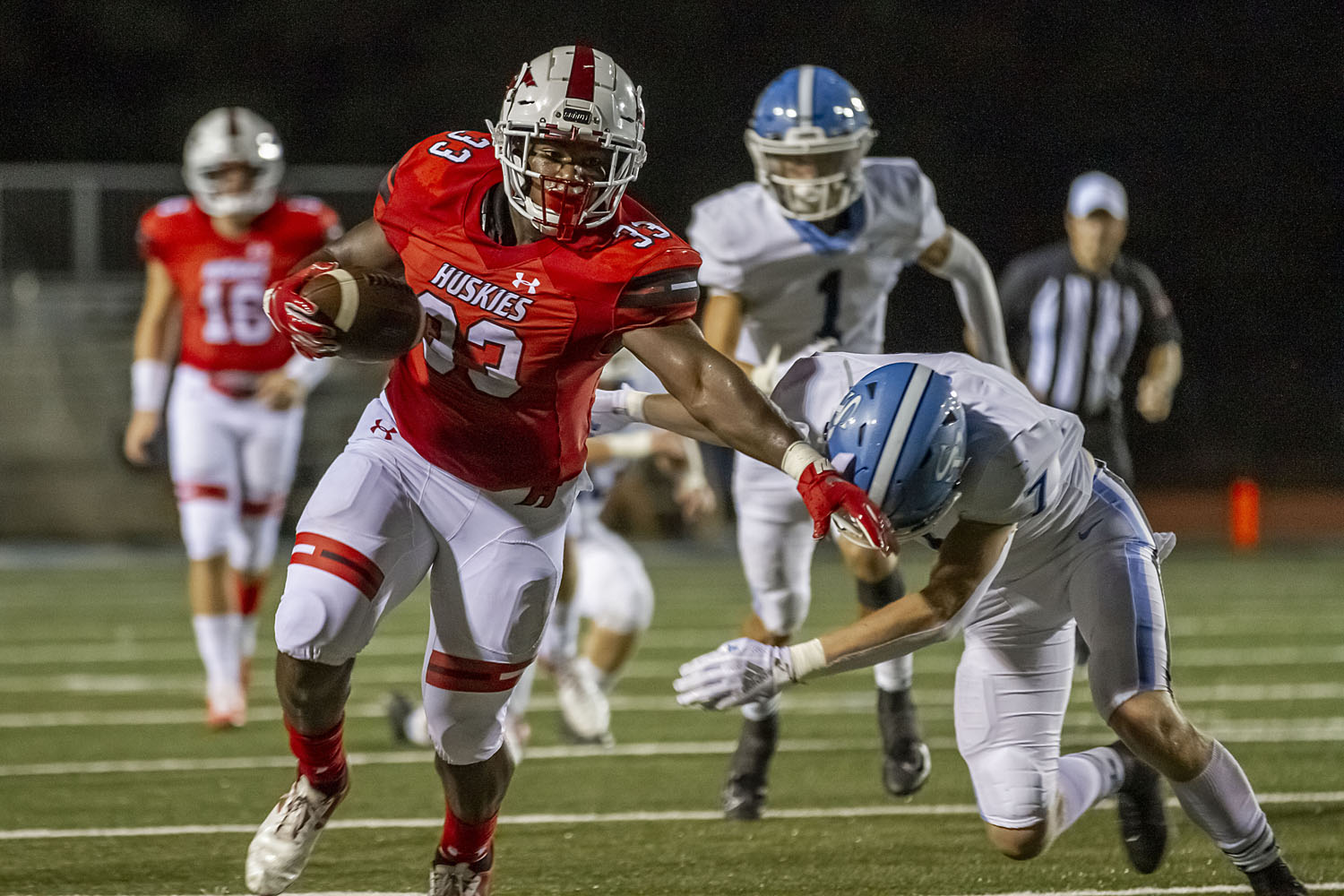 TRUSSVILLE — On a cold Friday night at Hewitt-Trussville Stadium, the Hewitt-Trussville Huskies clinched a playoff spot with a dominating 48-12 win over the Gadsden City Titans. The Huskies offense was powered by a three-headed rushing attack of Armani Goodwin, Sean Jackson and James Hammond.

The Huskies started the scoring on Friday night, taking the opening possession straight down the field. Jackson capped off the drive with a 17-yard touchdown run, the extra point made it 7-0 Huskies, only 1:23 into the game.

After forcing the Titans to punt, the Huskies offense went back to work. However after getting inside Gadsden City territory, Hewitt’s offense suffered one of their few hiccups of the night. The Huskies turned the ball over on downs after failing to convert a fourth-and-15 from the Titans 40-yard line. Gadsden City then gave the ball right back with a Jamarion “Bam” White fumble recovery at the Titan 42-yard line.

Armoni Goodwin turned the turnover into points for the Huskies with a 7-yard touchdown run. Hewitt was up 14-0 after one quarter of play.

The second quarter was a back and forth up and down the field 12-minutes of football. Less than a minute into the quarter, Demarcus Macon took a quarterback draw up the middle for a 1-yard touchdown run for the Titans, the extra point was blocked, making it a 14-6 Huskies lead.

After both teams exchanged punts, Hewitt’s Jackson broke free for a 51-yard touchdown run, extending the Huskies lead to 21-6. Gadsden City answered back on their next possession. Macon found Jahemn Norris in the back of the end zone for a 28-yard touchdown reception. The Huskies special teams blocked their second PAT attempt of the night, making it a 21-12 score.

That would be it for Gadsden City on offense.

The next Huskies possession resulted in a 55-yard touchdown pass from Cade Ott Caruth to Omari Kelly. Hewitt failed to convert the 2-point attempt.

After a Gadsden City punt pinned the Huskies on their own 2-yard line, it was time for Husky Fast football. James Hammonds scored on a 52-yard touchdown run, capping off a four-play, 58-second drive that stretched Hewitt’s lead to 34-12 at halftime.

On the Huskies first possession of the second half, Jackson broke free for a 45-yard touchdown run, his third of the evening. Cade Ott Caruth capped off the night’s scoring, with his second touchdown pass of the night, this one for 48-yards to Cayson Zackery. Caruth finished the night, 7-17 for 150 yards and 2 touchdowns.

The Huskies offense pounded the Titans defense on the ground with 326 yards rushing and five touchdowns, led by senior running back Sean Jackson’s 164 yards and three scores.

After the game, Coach Josh Floyd was proud of his guys, “Proud of our guys, came out and played tonight. I think we took care of business, especially in the second half. I challenged them at halftime lets go finish this game.”

On his defense’s performance after a couple of quick scores from the Titans offense, “Our defense settled down and played real well, there towards the end.”

Hewitt-Trussville will host Oak Mountain High School next Friday night for a combination Senior Night and Homecoming game. What’s at stake for the Huskies is the 3-seed in 7A Region 3. Regardless of the results, the Huskies will open the 2020 playoffs on the road, with either a trip to Decatur, Alabama versus the Austin Black Bears or a trip to Madison and a date with the James Clemens Jets.