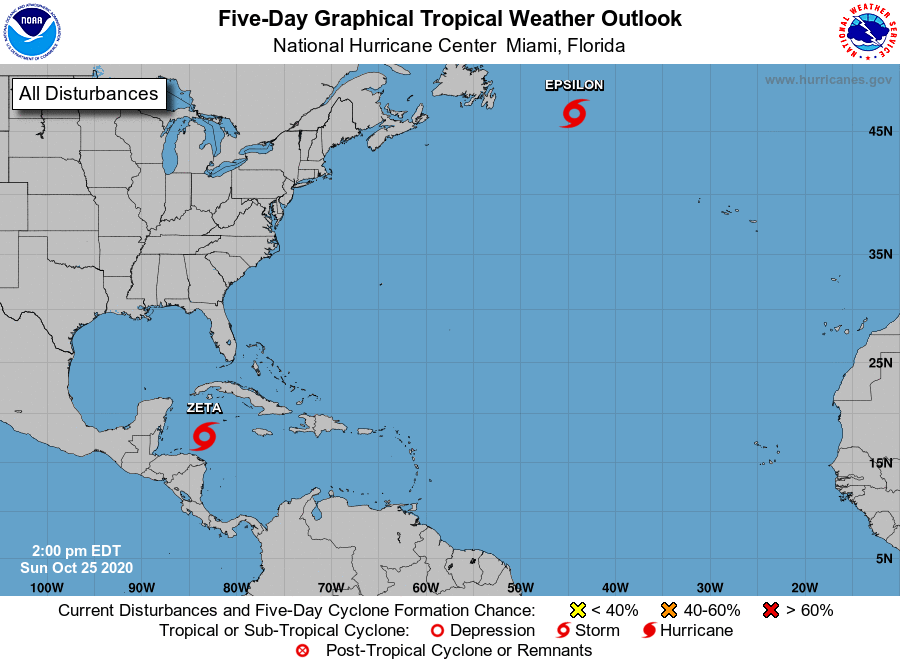 The system was centered about 300 miles (480 kilometers) southeast of Cozumel island in Mexico at midafternoon, the U.S. National Hurricane Center said.

The storm was nearly stationary, though forecasters said it was likely to shear the northeastern tip of the Yucatan Peninsula or westernmost Cuba by late Monday or early Tuesday and then close in on the U.S. Gulf Coast by Wednesday, but could weaken by then.

The storm had maximum sustained winds of 50 mph (85 kph), and forecasters said Zeta was expected to intensify into a hurricane Monday.

Officials in Quintana Roo state, the location of Cancun and other resorts, said they were watching the storm. They reported nearly 60,000 tourists in the state as of midweek. The government is still handing out aid, including sheet roofing, to Yucatan residents hit by Hurricane Delta and Tropical Storm Gamma earlier this month.

Zeta may dawdle in the western Caribbean for another day or so, trapped between two strong high pressure systems to the east and west. It can’t move north or south because nothing is moving there either, said University of Miami hurricane researcher Brian McNoldy.

“It just has to sit and wait for a day or so,” McNoldy said. “It just needs anything to move.”

When a storm gets stuck, it can unload dangerous downpours over one place, which causes flooding when a storm is over or near land. That happened in 2017 over Houston with Harvey, when more than 60 inches (150 centimeters) of rain fell and 2019 over the Bahamas with a Category 5 Dorian, which was the worst-case scenario of a stationary storm, said Colorado State University hurricane researcher Phil Klotzbach.

While Zeta was over open ocean Sunday, Jamaica and Honduras were getting heavy rains because the system is so large and South Florida was under a flood watch, McNoldy said.

But once Zeta eventually gets moving, it won’t be stalling over landfall, Klotzbach said.

The Hurricane Center said Zeta could bring 4 to 8 inches (10 to 20 centimeters) of rain to parts of the Caribbean and Mexico as well as Florida and the Keys before drenching parts of the central Gulf Coast by Wednesday.

A 2018 study said storms, especially in the Atlantic basin, are slowing down and stalling more. Atlantic storms that made landfall moved 2.9 mph (4.7 kph) slower than 60 years ago, the study found. Study author James Kossin, a government climate scientist, said the trend has signs of human-caused climate change.

Zeta is also in a dangerous place to stall. The western Caribbean is “where storms can cook” and rapidly intensify because of the deep, warm waters, like 2005’s Wilma, Klotzbach said. However, the National Hurricane Center was not forecasting rapid intensification for Zeta.

The lack of steering currents also meant wide spread of possible landfalls when Zeta eventually heads north to the Gulf Coast. The hurricane center said it could make landfall anywhere from Louisiana to the Florida Panhandle.

On Sunday, a hurricane watch was called for the Yucatan Peninsula from Tulum to Rio Lagartos, including Cancun and Cozumel, while a tropical storm warning was in effect for Pinar del Rio, Cuba.

Zeta broke the record of the previous earliest 27th Atlantic named storm that formed Nov. 29, 2005, according to Klotzbach.

This year’s season has so many storms that the hurricane center has turned to the Greek alphabet after running out of official names.

Zeta is the furthest into the Greek alphabet the Atlantic season has gone. There was also a Tropical Storm Zeta in 2005, but that year had 28 storms because meteorologists later went back and found they missed one, which then became a “unnamed named storm,” Klotzbach said.

Additionally, Hurricane Epsilon was moving quickly through the northern portion of the Atlantic Ocean. Forecasters said it would become a post-tropical cyclone later Sunday. Large ocean swells generated by the hurricane could cause life-threatening surf and rip current conditions along U.S. East Coast and Atlantic Canada during the next couple of days.