SPOC Automation: One of America’s best places to work

SPOC Automation is a true gem of the Trussville community, hidden in plain sight. Many people who pass by SPOC Automation while driving down Highway 11 may not know they have just passed one of Inc. Magazine’s Best Places to Work in America for the year 2020, nor one of Business Alabama Magazine’s Best Companies to Work for in the State, both titles that have recently been added to SPOC Automation’s list of recognitions, including being named on Birmingham Business Journal’s list of Birmingham’s Best Places to Work in 2016.

“We’re kind of like the best kept secret in the industry,” CEO Bobby Mason said.

SPOC (Sensorless Pump Off Control) is an innovation company that builds automation products for the midstream and the upstream energy market.

“All that sounds great and wonderful, but in short, what we do is motor controls and automation – so we control electric motors with variable frequency drives, which is a huge energy savings for our customers,” Mason said. “We control the electric motors on oil and gas wells, on the exploration  and distribution side of the business … we help them get it out of the ground. We control the motors that are on the pumps, so we actually control the pumps because we are the part that actually takes the power and then applies it to the motors on the pumps, and then all the processes come back through us. It gives them precision controls and allows us to automate their processes to help us to get oil and gas more efficiently, lower costs, improve mechanical and electrical life of their equipment.”

Mason compared SPOC’s technology to the dimmer on a light switch, which controls the intensity of the electricity going to the light bulb.

“We have technology that allows us to do the same thing with an electric motor, so now we can speed up and slow down your pump or your compressor, or whatever that rotating equipment, based on the variables that the field conditions are having,” he said. “So, you don’t have to mechanically go and change out pulleys and shivs to change speed. We electrically can change the characteristics of the motor and change the speed without having to do any mechanical changes, whatsoever.”

While most of SPOC Automation’s technology and equipment is used in oil and gas production, essentially any equipment that rotates and has an electric motor on it is a candidate for their products.

“We just happen to be super focused into the energy space with oil and gas because we were able to carve out a very nice market presence in it,” Mason said.

Mason founded SPOC Automation, in Trussville, in 2002, with some of SPOC’s first customers being in the coal bed methane fields in Tuscaloosa.

“That’s why a company in Trussville, Alabama, is in the oil and gas industry,” he said. “We actually got started here. We’ve since moved that out and now we have close to 70,000 units running across the entire world.”

While SPOC has sales and service teams spread throughout the United States, and distribution partners globally, all of the manufacturing and engineering is done in Trussville.

“We’ve got new products that we’re developing that we’ll be launching next year that will actually get us into some additional spaces with even more green energy savings and alternative energy solutions,” Mason said. “So, I’m excited. I see us continuing to grow. We have a lot of headwinds, obviously with COVID and there was the oil crisis at the exact same time, but we’re still a market leader.” 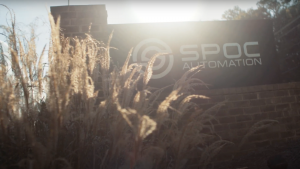 SPOC Automation produces world-changing technology, but it is the culture and values of the company that secured their place on lists of the best places to work in Birmingham, Alabama and the United States. Through SPOC’s five core values, articulated in its Lift Up program, this innovative company has created a business culture that is to be rivaled. Those core values are: Committed, Solution Focused, Passionate, Caring and Gratifying.

To make it even more interesting, SPOC has their own definition for what each of these values means to them as a company. To be committed is to do it right, and do it on time, every time. To be solution focused means that, as an innovation company, they are always looking for a better way. Being passionate means they are there to win, but more importantly, they are there to help their customers win. Caring means they invest to make their employees, customers and suppliers better. Finally, gratifying means that while they take their work seriously, they also find it fun and exciting to make products that change the world.

“We’ve been very blessed to have put together a great team and they’ve bought into this culture,” Mason said. “We live it out. I think that’s the secret to our success – not only our people, but our culture of always trying to lift people up.”

If an employee witnesses a co-worker in the act of living out one of their core values, they can nominate that person to the management team. The management team then votes on whether or not that action met the criteria of living out the core values. Each month, SPOC has an awards ceremony where they give employees custom coins representing their five core values. At the end of the year SPOC awards the prestigious Lift Up coin.

“When you win, you get a coin and recognition in front of all of your peers; it’s something that’s very coveted here,” Mason said. “Then at the end of the year, we give a monetary award and there is a special coin – we only give one out a year – that’s the Lift Up coin. That’s the person that ideally represented SPOC Automation’s core values the best. Sometimes, that’s a hard decision.” 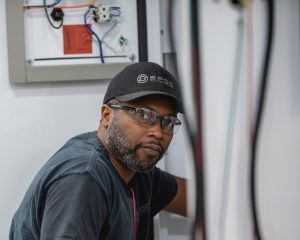 As a company, SPOC strives to lift up not only one another and their company, but they lift up their customers and industry, as well.

“I’m just tickled to death with the spirit of the people that work here because they truly live out our core values and try to not only lift up our sales, but our industry through knowledge,” Mason said. “Ultimately, we believe that we are lifting up the country by what we do, by lowering lifting costs and producing more efficiency and higher reliability in our energy supply. It only stands to make us a better country if we can be energy independent, and we play a big role in that. I believe that we will continue to grow and solve more problems.”

During the shutdown in early 2020, SPOC started a new program called Build Up, where they gathered experts in the field and began making videos to share their combined knowledge. The information that they shared would normally be considered trade secrets, or at least something that other companies would have to pay for, but SPOC decided to make this information freely available.

“We started sharing videos called Two-Minute Drives,” Mason said. “It’s been picked up by magazines all over the world, it’s been shared online in various formats – our web traffic has just exploded – as people go and learn about problems and how to solve them. We did that out of a spirit to build up the industry to help them rebound and recover and thrive on the other side of this pandemic and oil crisis.”

While SPOC Automation does business globally, Mason said that the heart of the organization being in Trussville is a major positive for the company.

“Trussville is just such a wonderful community,” he said. “It’s easy for us to draw talent to our company because of the great people that are in this area. We have a growing, vibrant city here. We bring people in from all over the country that come in, because we do a lot of training here, and people are just blown away at the beauty and how clean the city is. Just being associated with this area is a positive for us.”

SPOC Automation is located at 7363 Gadsden Hwy, Trussville, AL 35173. You can also visit them online at spocautomation.com.

“If you really want to see who SPOC Automation is, visit our website,” Mason said. “As soon as you get to it, you can go to ‘About Us’ and there is a short video on there about the Lift Up program. It gives you a great picture of what we do and who we are.”