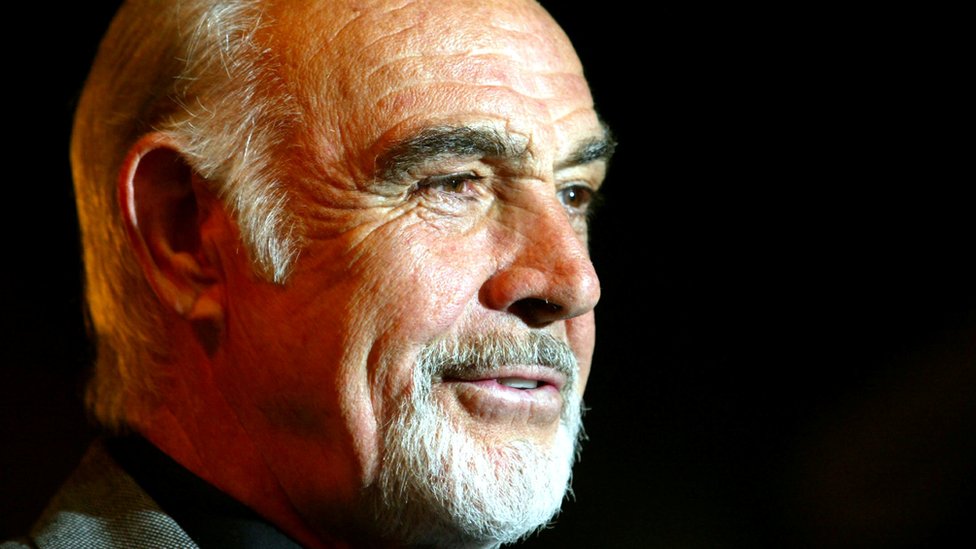 Sean Connery, a lion of cinema whose roar went beyond Bond

Writing an appreciation of Sean Connery feels inevitably inadequate compared to experiencing the real thing. To glimpse his magnetism, you might turn to a photograph of him in a tailored suit, leaning against an Aston Martin. You’d probably get more of his menacing charisma by pulling up the “Chicago way” scene from “The Untouchables.”

It might be enough simply to say: The king is dead.

As a lion of movies for half a century, Connery’s talent was manifest. He was famously cast as James Bond without a screen test. It was that obvious. And from then on, in even the lesser films, Connery, who died Saturday at 90, was never out of place on screen. His presence was absolute. Noting his supreme confidence, the late film critic Pauline Kael once wrote, “I don’t know any man since Cary Grant that men have wanted to be so much.”

As a more earthy, macho movie-star ideal, Connery was so beloved that he was shared, like folklore, between generations. It helped that he never seemed to be appealing to the audience, or to anybody, for anything. With raised eyebrows and roguish wisecracks, there was little that Connery (nearly always the lead) didn’t command. And to a certain extent, that cocksureness shaped his career, too.

Connery, 32 when “Dr. No” came out,” had already lived through World War II. Born into poverty in Edinburgh, he left school at age 13 during the war and worked as a laborer and a bricklayer before he donned the tuxedo. He saw Bond, too, as a product of the war.

“Bond came on the scene after the War, at a time when people were fed up with rationing and drab times and utility clothes and a predominantly gray color in life,” Connery, who served in the British Navy as a teenager, told Playboy in 1965. “Along comes this character who cuts right through all that like a very hot knife through butter, with his clothing and his cars and his wine and his women.”

Long after achieving fame, Connery contentedly gave it up. He spent his final two decades cheerfully retired in the Caribbean, often playing golf with his wife, unimpressed and little tempted by more modern Hollywood productions. (He said he was “fed up with the idiots.”)

There was irony in that. Connery, as the original cinema Bond, did much to make the style and tone of today’s movie franchises — even if few carry a lick of Connery’s danger. His Bond heir Daniel Craig on Saturday credited Connery with helping “create the modern blockbuster.” It’s hard to imagine the suave secret-service spy would have ever become a cultural force if the franchise hadn’t from the start traded on its star’s brutal charm. Connery crucially added humor to Ian Fleming’s pages, along with a dash of cruelty.

Connery’s Bond became etched as an icon of its era, one increasingly distant from today. He was the epitome of a dashing, womanizing, macho image that loomed over the second half of the 20th century. Connery differed from his character in many respects but not all. In that same Playboy interview, he explained why he believed hitting a woman with an open fist was justifiable.

Bond is the first word on Connery but it’s certainly not the last. Against the pleas of fans, he departed the character at 41 (he was later coaxed back for 1983’s “Never Say Never Again”), refusing to be typecast. His best and most interesting work all came after.

“The Hill” (1965) was the first of five films with Sidney Lumet (the others were “The Anderson Tapes,” “The Offense,” “Murder on the Orient Express” and “Family Business”), and while it’s less seen than many of Connery’s, it remains possibly the best expression of the actor’s rugged power. He plays a prisoner of indomitable strength and defiance jailed in a sadistic British Army WWII military prison in the scorching Libyan desert.

He was a soldier again a decade later in John Huston’s “The Man Who Would Be King,” based on the Rudyard Kipling short story, playing a military officer who’s embraced as a god in Kafiristan, an impression he struggles to maintain. It’s a perfect role and performance for Connery, whose best work came when he — this former bodybuilder of unimpeachable force and magnetism — was humbled.

Connery’s confidence came through most dramatically when it was challenged by foes more formidable than a Bond villain. In his Oscar-winning performance in Brian De Palma’s Prohibition-era crime film, “The Untouchables,” he’s alive to Al Capone’s threat, telling Kevin Costner’s Treasury Department agent: “You see what I’m saying is, what are you prepared to do?”

Accepting the Academy Award, Connery addressed his wife since 1975, Micheline Roquebrune. “In winning this award, it creates a certain dilemma because I had decided that if I had the good fortune to win, that I would give it to my wife, who deserves it,” he said. “But, this evening, I discovered backstage that they’re worth $15,000 — now I am not so sure. Micheline, I am only kidding. It’s yours.”

Connery aged well as an actor, crafting more diverse and inquisitive portraits of masculinity. He played an aging Robin Hood, with Audrey Hepburn, in “Robin and Marian” (1976), a combustible submarine captain in John McTiernan’s “The Hunt for Red October” and a lovable, playful father to Harrison Ford in Steven Spielberg’s “Indiana Jones and the Last Crusade” (1989).

Another “Indiana Jones,” Connery said, had been the only thing that really tempted him to come out of retirement. That could be because the glint of mischief that accompanied nearly every Connery performance was so present in “The Last Crusade.” Connery always left you feeling if not shaken then very happily stirred.