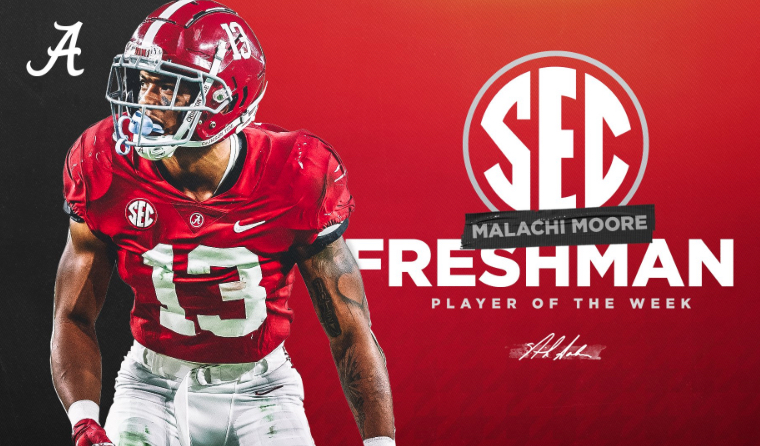 BIRMINGHAM – Alabama freshman defensive back Malachi Moore, a former all-state performer at Hewitt-Trussville, has been selected as the Southeastern Conference Freshman of the Week following a 41-0 home win over Mississippi State last Saturday night.

Moore played a key role in the Crimson Tide’s first shutout of the season, securing a team-high eight tackles to go with a pair of pass breakups. The freshman helped slow the Bulldogs to a 28-of-48, 163-yard outing through the air in Tuscaloosa.

This represents Moore’s second league honor of the year, as he accepted SEC Freshman of the Week recognition following a road win over Texas A&M on Oct. 3. Through six games, he is tied with fellow freshman Daniel Wright with a team-best two interceptions and leads all Alabama players with six pass breakups.

“The fact that he’s doing this as a true freshman is the part that’s impressive and that might surprise me a little bit, but I don’t think anybody that knows Malachi is shocked by this just because of his work ethic,” said Hewitt-Trussville head coach Josh Floyd during a segment on Tribune Sports Live last week. “I’ve never had anybody work harder than Malachi Moore. That guy would bring it every day to practice, he would do a lot of stuff on his own, he just never stopped.”

“Malachi has a really high football IQ and I think that’s a big (factor) no matter where you go,” he continued. “Everybody knows about Alabama’s defense — it’s one of the best in the country every year, so just to be on the field at all as a true freshman is very impressive.”

Floyd says everyone in his house cheers on Saturdays when Moore makes a play for the Crimson Tide.

“Everyone in the community is proud of him,” said Floyd.