TRUSSVILLE — The Trussville City Council and Mayor Buddy Choat were sworn in on Monday, Nov. 2, 2020.

Pastor Mike Ennis gave the invocation for the meeting and Boy Scout Troup #216 presented colors for the Pledge of Allegiance.

The Honorable Justice Robert Vance swore in Choat and all five City Council members. The next four years will be the first term for Councilmember Jaime Melton Anderson, Lisa Bright and Ben Short. Councilman Perry Cook and Councilman Alan Taylor were also sworn-in for their next terms.

The council selected Councilman Alan Taylor to lead as Council President for one year. The president will be selected on an annual basis.

The new council also approved an ordinance to adopt Rules of Procedure. No changes were made to meeting dates or times.

The council re-appointed Carl Chamblee to a two-year term as part-time Municipal Judge.

“He [Chamblee] will be the second-longest-running Municipal Judge in the state,” said Choat during a workshop Friday. “He’s in line with Trussville as far as what we want our courts to do.”

Chamblee has been the city’s judge since 1984. The motion passed unanimously.

Massey, Stotser and Nichols law firm will remain as the city attorney and city prosecutor after a unanimous vote. 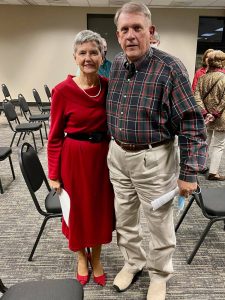 Outgoing Trussville City Clerk Lynn Porter said she has been asked to leave and she has accepted a part-time job with the city of Springville.

Mayor Choat appointed council members as liaisons to committees and he will make Planning and Zoning Board appointments during the Monday meeting. He said he has chosen Ben Short for P&Z, Design Review and Telecommunications. Alan Taylor will likely be appointed to Utilities, Finance, Public Safety and the Chamber of Commerce. Choat said he is looking to appoint Jaime Melton-Anderson to Library, ACTA, Historical and Beautification Boards. Lisa Bright will likely go to the Industrial Board, the Board of Education and Public Works. Choat would also like to see Perry Cook on Parks and Recreation, Senior Advisory, Inspections and the Tree Commission.

At the end of the meeting, each member thanked their families for support and thanked everyone for attending the meeting in the Fireside Room of the Trussville Civic Center.