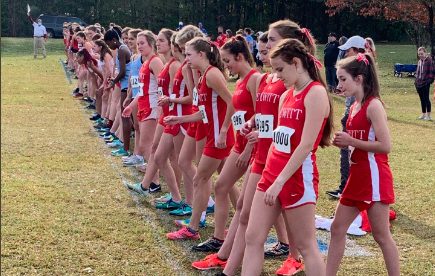 HOOVER – The Hewitt-Trussville boys and girls cross country teams have qualified for the AHSAA State Championship Meet in Oakville.

Both Husky squads notched strong outings on Thursday morning in the Class 7A, Section 3 Meet at Veterans Park in Hoover. The Hewitt-Trussville girls finished second in the team standings while the boys took fourth place, edging Spain Park in a tiebreaker scenario, according to information provided by Hewitt-Trussville athletics.

Against a field of seven teams, junior Maci Mills paced the Hewitt girls with a time of 20:15.34 — good enough for fourth place overall. She was followed by two teammates in the top 10, as senior Amelia Brady finished ninth, one spot ahead of sophomore Sophia Knox. Kylee Sisk placed 11th and Avery Cahoon finished 16th overall for the Huskies.

The Hewitt-Trussville boys tied Spain Park at fourth place with a score of 78, and eventually claimed the tiebreaker thanks to the team’s sixth-place finisher, Will Edwards, who finished ahead of the Jaguars’ sixth-place runner.

Only the top four teams advance to state on Nov. 14.

Both Hewitt-Trussville teams will vie for a 7A state championship next Saturday morning at Oakville Indian Mounds Park.