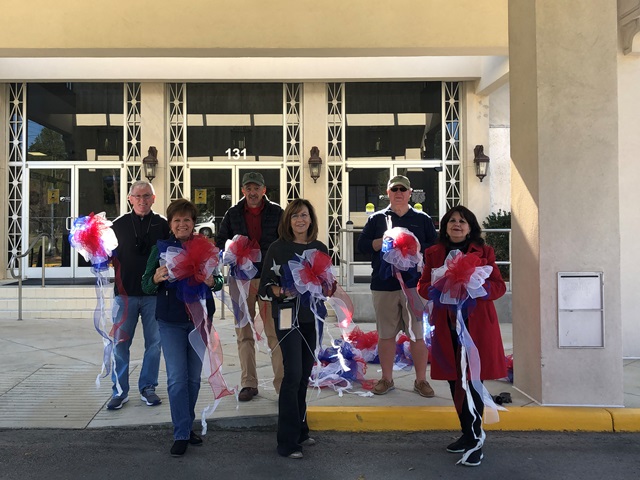 Since 2005, the Trussville Daybreak Rotary Club has decorated city hall with ribbons for Veterans’ Day. For the past few years, the club has partnered with the Trussville Fire Department on this patriotic project. 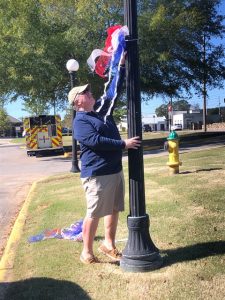 Rotarian Linda Burns, who came up with the idea, believes it is important to say ‘thank you’ to veterans across the country. She says she borrowed the idea from a community in Lake Jackson, Texas, after seeing the downtown area adorned with yellow bows for soldiers.

Burns’ son, Justen, is in the Army, so service men and women hold a special place in her heart.

“Our military and their families sacrifice so much for our country,” said Burns. “The least we can do is to recognize them and to say ‘thank you for your service.’”

Justen will retire in June with 20 years of service.

With several veterans among its members, the rotary club places great importance on recognizing them.

At its next meeting on Nov. 11, the Trussville club will provide an opportunity to hear from some of those veterans, as well as guest speaker Bobby Markovich, a Navy Capt.

Markovich, of U.S. Pacific Fleet (CSFWP), will join next week’s meeting via Zoom.

The Trussville Daybreak Rotary Club meets on Wednesday mornings at 7 a.m., usually through Zoom. For more information on the Trussville Rotary Daybreak Club, or to help with a project, contact Diane Poole at dianepoole1225@centurytel.net.