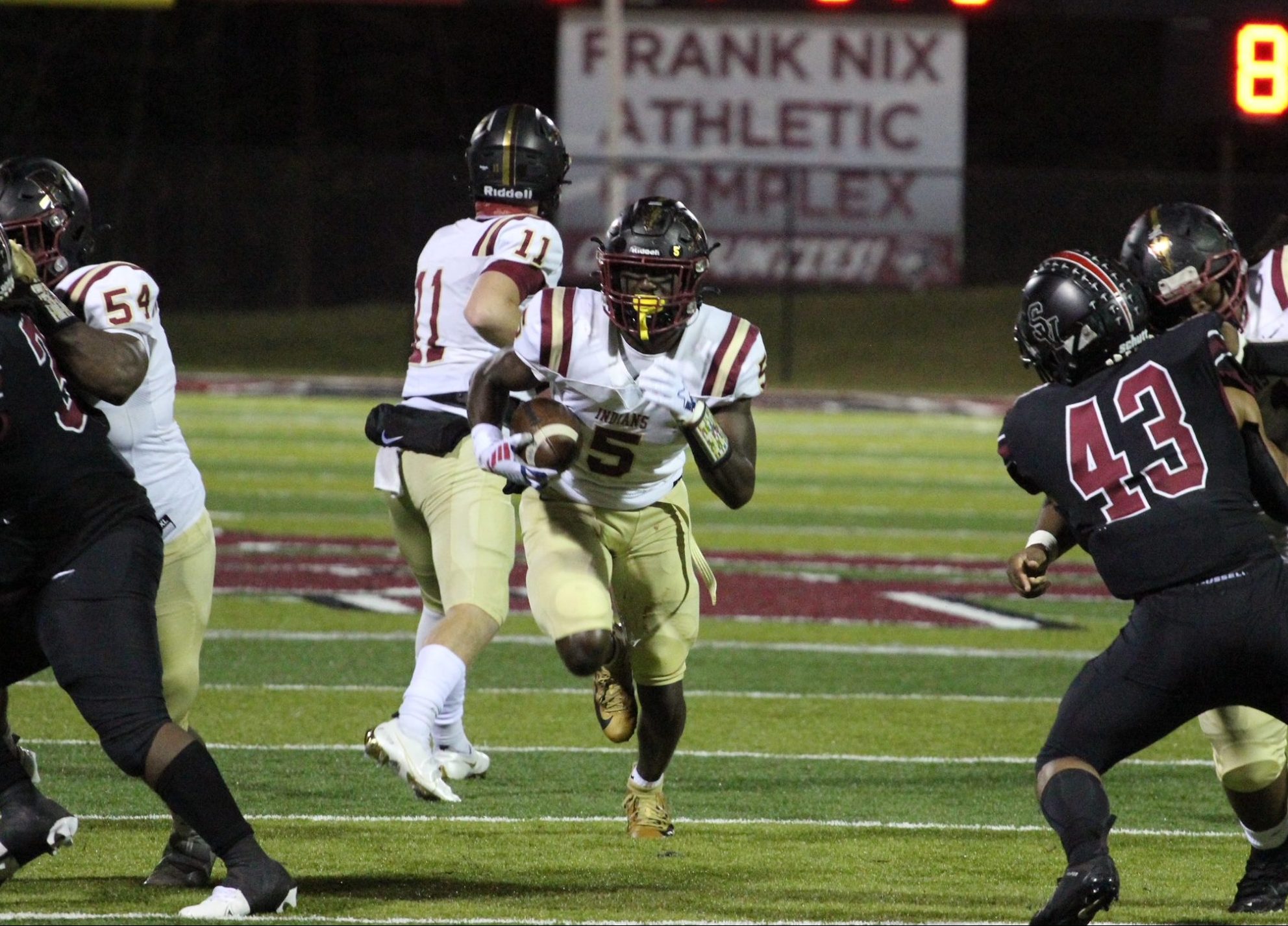 Pinson Valley running back Kenji Christian (5) charges through the hole during a playoff win on Nov. 13, 2020. Photo by Joshua Huff

Pinson Valley marches into Round 3

IRONDALE — Pinson Valley survived a stiff test on Friday as the Indians weathered a determined Shades Valley team, 48-16, in the second round of the AHSAA Class 6A state playoffs despite the Mounties entering the contest with one of the worst records of any team remaining in the bracket.

The victory sends the Indians into the third round for the fourth consecutive season. Throughout that span, Pinson Valley has won two state championships and nearly missed out on a third straight state championship berth in 2019 were it not for a heartbreaking loss to eventual champion Oxford.

Pinson Valley entered Friday’s contest following a 45-0 victory over visiting Arab on the opening round. On deck was a Shades Valley team that began the year 0-6 before salvaging its season with three wins in the final four games. Though at face value, Shades Valley’s record seemed rather bleak, but six of its seven losses were against playoff teams with several of those teams currently in the running for a state championship.

“The second game of the season we came here we were in a dogfight,” first year Pinson Valley head coach Sam Shade said. “They were winning for most of that game. So, we knew coming in that this was a good football team. They weren’t going to lie down. Coach (Jamie Mitchell) has done a great job the last half of the season.”

Despite the daunting task of facing the Class 6A, Region 6 champion Indians, the Mounties were more than up to the challenge of standing toe-to-toe with the state power. That was evident late in the first quarter following Pinson Valley jumping out to a 20-6 lead thanks to a 24-yard Michael Sharpe touchdown run on just the third play of the game, an 80-yard Jaquel Fells Jr. touchdown run and a Taborie Reed muffed punt recovery in the end zone.

Tasked with stifling what was quickly becoming a blowout, Shades Valley managed to weather the onslaught and claw its way back thanks to multiple Pinson Valley unsportsmanlike penalties, a safety and a 76-yard Jordan Pearson touchdown catch and run with 3:54 left in the first half.

And just like that, the Mounties entered the second quarter facing a much more favorable deficit of 20-16. They then took that momentum into a seven-minute long drive to open the quarter, which ultimately ended in a turnover on downs despite methodically working their way down the field with relative ease.

With Pinson Valley’s offense stifled throughout the latter part of the opening quarter, the Indians was in desperate need of a spark following the Mounties’ stalled drive. That came in the form of junior quarterback Zach Pyron, who orchestrated a 98-yard scoring drive capped off by a 24-yard Sharpe touchdown run on 4th and 4 that stretched the Indians’ lead to 27-16 with 2:11 remaining in the first half.

Shades Valley endeavored to respond before halftime, but quarterback Earl Woods’ attempt to keep the drive alive on 3rd and 10 deep in Pinson Valley territory turned into a turnover after Alijah May stripped the ball from Woods and returned it to Pinson Valley’s 30-yard line.

The Indians quickly capitalized with a 6-yard Sharpe touchdown run to end the first half with a 34-16 lead.

“We’re blessed,” Shade said. “We’ve got some skill guys and some guys on offense that can make things happen. Jaquel Fells, he’s a senior, he’s a guy that does not get as many touches as he probably should get. If he was on another team he’d be the feature guy. We do have a lot of other weapons. (Michael Sharpe) had a great game.”

Shades Valley’s offense took to the field to open the second half and only managed to advance the ball a few yards. As a result, the Mounties were forced to punt, which they did to disastrous results. The punt landed in the arms of the dangerous Fells, who returned it 60-yards for the touchdown to stretch the Indians’ lead to 41-16 with 9:06 left in the third quarter. The wind all but went out of Shades Valley’s sails from that moment on.

On the night, Pinson Valley was carried by a run game that recorded five touchdowns. Of those five, Sharpe accounted for four touchdowns. The Indians also notched two special teams touchdowns and totaled two takeaways, both of which came in the second half.

“Hats off to our guys on defense,” Shade said. “(Shades Valley) started off pretty strong, but we found a way to get it going. Special teams did a really good job. Kind of similar to last week, we feel like we played a complete ball game.”