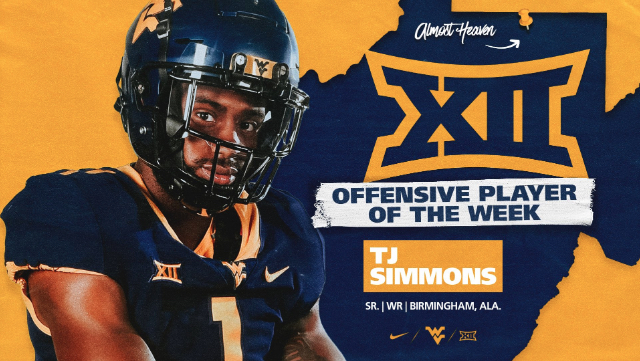 MORGANTOWN, W.V. – Former Clay-Chalkville and current West Virginia wide receiver T.J. Simmons has been named the Big 12 Conference Offensive Player of the Week for his efforts in a win over TCU last Saturday.

Simmons went for four receptions for 90 yards and a pair of touchdowns in the 24-6 home win.

“T.J. Simmons was big with two highly-contested catches,” said Mountaineer head coach Neal Brown following the game. “Our receivers have been beat up a little bit and they’ve really put in consecutive games where they’ve played better, and to make two huge contested catches for touchdowns — those were big.”

Simmons has been more active in the West Virginia offense during the last three weeks, hauling in 10 receptions for 214 yards and two scores. The former Clay-Chalkville star hopes to continue that hot streak this weekend when No. 18 Oklahoma comes to town.