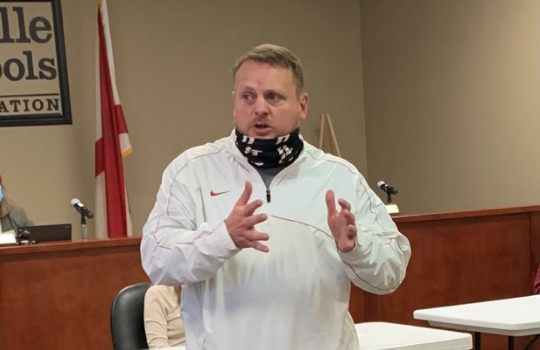 Athletics Director Lance Walker recognized the newest members of his staff, as Chris Pike and Tom Esslinger step into head coaching roles at Hewitt-Trussville High School. Pike, a Husky alum, is taking over the school’s wrestling program while Esslinger helms the track and field team.

Both coaches bring a wealth of experience to their positions. 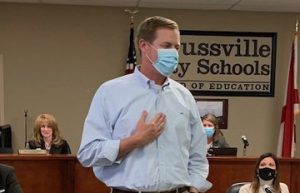 “I feel like I had a good situation (at Homewood), so it took a special place and special people to get me to leave,” said Esslinger. “I can not say enough about how welcome I’ve felt and how happy I am (in Trussville).”

Esslinger, a former all-conference decathlete at the University of South Alabama, believes this year’s team can ‘do something special.’

Pike will also get his first season underway shortly as the 2020-21 Huskies take the mat. The 1996 Hewitt-Trussville grad has 18 years under his belt as a teacher and coach in Alabama.

As an assistant wrestling coach at Thompson High School, he helped lead the Warriors to four state titles as he garnered two Alabama assistant coach of the year awards. Pike says the coaches he grew up playing for in Trussville made him want to pursue a career in education.

“I’m still in contact with a lot of these teachers and coaches from back then because they made an influence on me and so I want do that for my wrestlers,” said Pike.