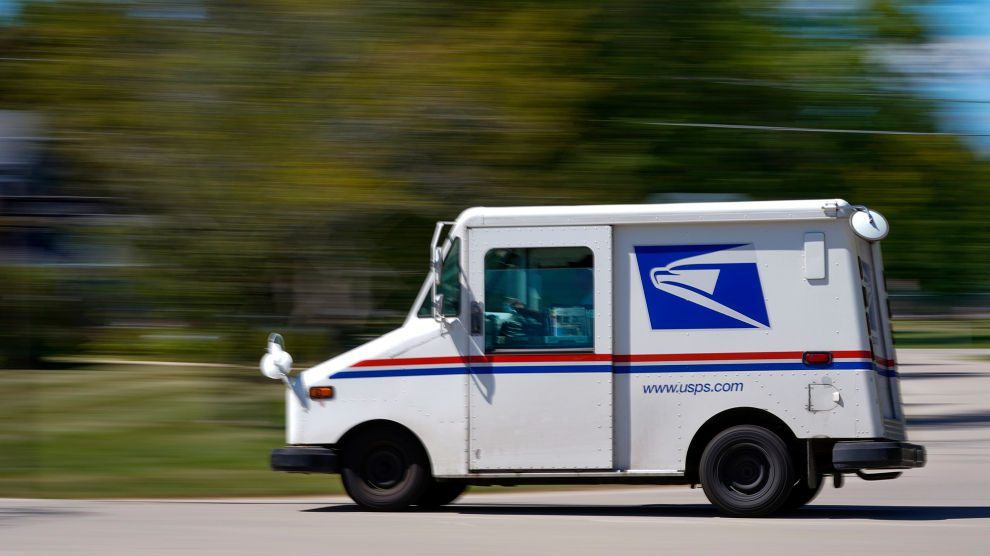 A mail truck moves down a street Tuesday, Aug. 18, 2020, in Fox Point, Wis. Facing public pressure and state lawsuits, the Postmaster general announced Tuesday he is halting some operational changes to mail delivery that critics warned were causing widespread delays and could disrupt voting in the November election. (AP Photo/Morry Gash)

When Chip Matthews heard the mail truck arriving on his sixth birthday, he rushed out — not knowing that he’d come back with a treasure.

Outside the house, which was decorated with birthday balloons, mail carrier Tawanna Purter held a pile of boxes. One of them was marked with Chip’s name and a greeting for his special day, Nov. 5.

“So, when he came running out the door, I said: ‘You must be Chip!’ And he was like, yes. I said, ‘Today’s your birthday?’ And he started smiling,” Purter said.

“So, I said, ’Let me see if I can find you something for your birthday.’” She checked her pocket and surprised him with a gift: a dollar bill and four quarters.

This is the kind of thing Purter does — “I help out anybody, I don’t care,” she said — surprising people with gas or grocery money when they need it, paying forward the kindnesses of others who helped her out when she struggled to keep a job.

On this day, the 42-year-old letter carrier made one little boy very happy.

“He was ecstatic,” said his mom, Bonnie Matthews. “He came running back in the house just waving his money, so excited that he got some birthday money from somewhere extra special and unexpected.”

Chip is saving up to buy a Spider-Man action figure. His mom said the kind gesture gave the Opelika, Alabama, family hope after the long months of pandemic isolation, during which she lost her job as a school counselor.

“Our family, like many families, has endured a lot … has had some pretty significant challenges. And so, gestures like that, I think those are the things, those are the memories that we’re hoping to take away from these nine months,” Bonnie Matthews said.

Her hope is that Chip and his 8-year-old sister, Bennett, will remember this when they grow up. “Not the ugly that was out there right now, but the good and the kind and the giving.”

A photo of a smiling Chip and Purter next to the mail truck has been shared widely on social media. Purter said she was just trying to give back, because people are often nice to her 8-year-old son, Joshua, and sometimes give him a buck or two to brighten his day.

On a recent day, Chip heard the mail truck and rushed out again, this time to deliver an envelope with a thank-you card for his favorite mail carrier. They smiled again and posed for another photo.

“Even though … no one knows how they’re going to make it from here to the next day,” Purter said, “there are still people that … take their time and still want to show kindness.”

Since that day, the families have kept in contact. Purter has struggled to find someone who can take care of her son, and Matthews agreed to watch him at her home so he can attend virtual classes while his mom is on her mail route. They’re pleased with a bond that started with a small birthday present that united two families.

“It was an awesome moment,” Matthews said. “There was a reason we were brought together.”

“One Good Thing” is a series that highlights individuals whose actions provide glimmers of joy in hard times — stories of people who find a way to make a difference, no matter how small. Read the collection of stories at https://apnews.com/hub/one-good-thing

Associated Press religion coverage receives support from the Lilly Endowment through the Religion News Foundation. The AP is solely responsible for this content.