LATEST NEWS
Home Features Even in 2020, Alabamians find reasons to be thankful 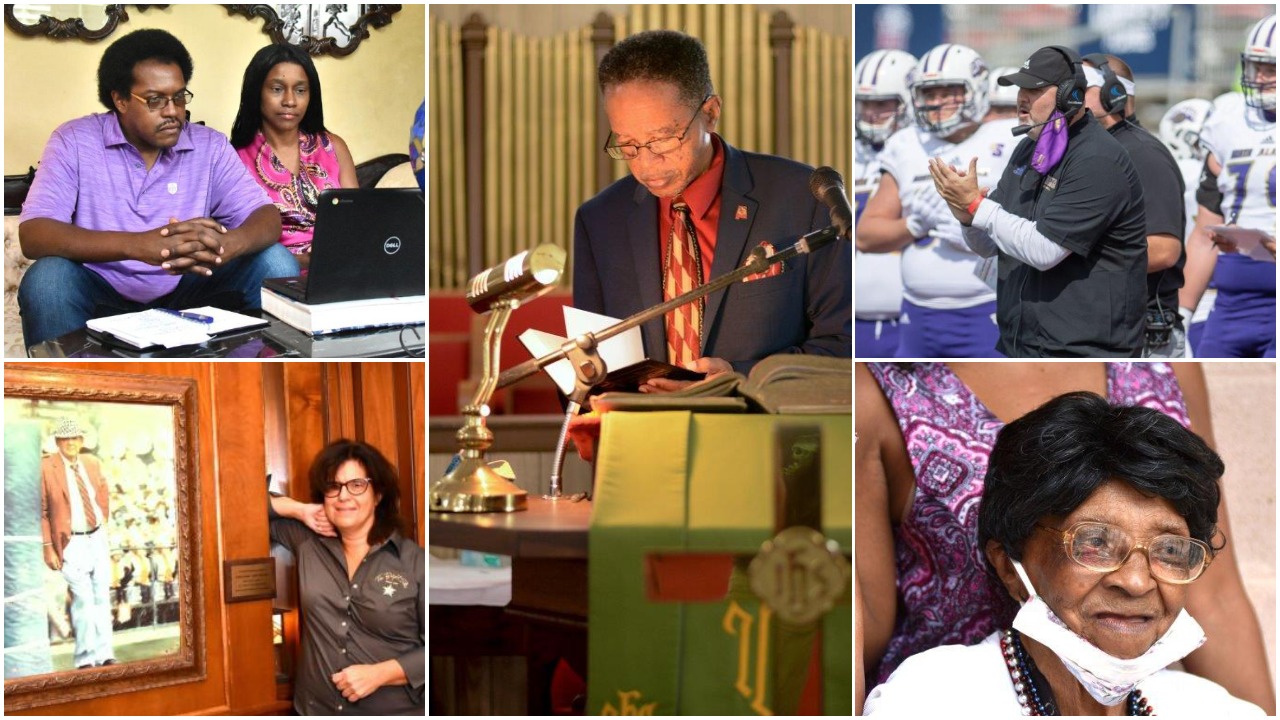 Even in 2020, Alabamians find reasons to be thankful

A Dothan native is thankful his family church didn’t succumb to COVID-19.

A Bessemer restaurateur is thankful her family restaurant survived its second pandemic.

The head football coach of a north Alabama university is thankful his squad could take the field this fall.

And Miss Jady is still going strong at 101.

To be certain, 2020 has been a year like no other. There have been infections, hospitalizations and deaths from a virus that has spanned the globe. Across Alabama, health officials urged residents to stay home and told “nonessential” businesses to close their doors. For many, that loss of business cost them their livelihoods.

So much of 2020 has been peculiar. And, in a sense, Thanksgiving will follow that peculiar pattern. Large family gatherings and servings of Grandma’s specialty green bean casserole could be missing, as the state health officer continues to give the regrettable news that staying socially distanced from others is necessary to help stop COVID-19 transmission.

But as Alabama reaches the fourth Thursday of November, one thing remains constant: Many people still have reasons to be thankful.

Dothan native Joseph Bryant returned to his hometown in early March for a death in his family. While he was there, he visited Cherry Street African Methodist Episcopal Church, his home church before leaving 23 years ago to attend the University of Alabama. 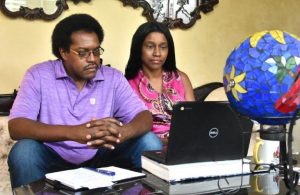 From their home in Hoover, Joseph Bryant and Kem Marks Bryant take in the sermon of the Rev. Joseph Rembert from Cherry Street AME Church in Dothan. (Solomon Crenshaw Jr.)

“We knew the pandemic was spreading, and we knew pretty soon it was going to be here,” recalled Bryant, who works in communications at UAB. “We knew it was going to come home soon. Everything was looking pretty bleak. I knew the church had started meeting on the phone, on teleconference. It was just such a sad moment to see the church closed.”

Bryant, 42, found part of a brick from the church embedded in its gravel driveway and dug it out.

“I just sat there for a while and looked at the church, and I took my little brick almost as a goodbye,” he said. “This is a memento of my church home I frankly didn’t think could survive this pandemic, being closed and it already had a small congregation. How could it survive a big blow like this?”

But Cherry Street has survived, embracing technology and social media to maintain the ministry. It is 143 years old – the oldest AME church in Alabama. 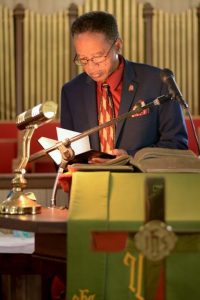 Pastor Joseph Rembert at the pulpit of Cherry Street African Methodist Episcopal Church in Dothan: “We found out that just because you move to another city or another state, you don’t have to lose your relationship with the church that you grew up in.” (Horace Freeman)

The Rev. Joseph Rembert, 72, became the pastor of Cherry Street AME during the pandemic. He admits the membership then was so sparse he wondered where the people were.

“I think that (membership) has slipped much more than just a little bit,” Rembert said. “I came here in May of this year, just several months ago, and I could count the members on my hands that were actually active in my church.”

The pastor said Cherry Street membership had gotten older, and as children got older, they went off to school, found jobs elsewhere and didn’t come back to Dothan.

“I think that really is one of the blessings of the pandemic,” he said. “We found out that just because you move to another city or another state, you don’t have to lose your relationship with the church that you grew up in. What we’ve learned through this pandemic and really making use of the technology that we have is you can be anywhere in the world and be a part of the church.”

The church conducts services via conference calls and Facebook Live. And while church membership – which now includes Bryant’s wife, Kem – totals about 40, the church has about 200 followers on social media. Both Joseph and Kem attend the church’s services online.

Bryant, a fourth-generation member of Cherry Street who lives in the Birmingham suburb of Hoover, said he was saying goodbye when he visited the church in March. He’s surprised the church, which is two blocks from where he grew up, is thriving.

“I never could have imagined that this pandemic and all the tragedy that it brought would have some blessing in that,” he said. “It forced us to be creative and keeping the church together in a different way. I still have this brick, but the brick now is not a symbol of what used to be. It’s a symbol of what is and what can be even greater now.”

’Tis the season for COVID and kickoffs

There was nothing in the University of North Alabama football playbook about head coach Chris Willis contracting COVID-19.

“I’m not gonna lie. I was nervous,” Willis recalled of his bout with the virus in late May, early June. “Once I found out I had it, I came home and I was just nervous and scared. What is fixing to happen? I did like everybody else. I read up on it and did the things that were asked of me, but still you see all the stuff out there.”

Willis feared for himself, but more for his wife, Tara, and sons, Drew, Beau and Cody. 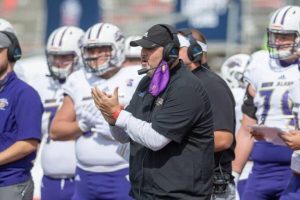 University of North Alabama football coach Chris Willis is glad that his team can continue to play during the pandemic and make progress in its transition to Division I from Division II. (UNA Sports Information)

“All I knew was if you get it, it’s very easy to give it to the next person beside you,” said the coach, who isolated himself from his family. “We’re just very blessed and fortunate we made it through that.”

No one else in the Willis household contracted the virus, and his bout was relatively mild. But Willis has more reason for thanks, as his Lions football team has been able to play during the fall of 2020, something that was uncertain throughout the summer and even after other programs kicked off their seasons.

The Lions started their campaign on Oct. 3 with a 28-7 loss to Liberty University in Lynchburg, Virginia.

“We hung in there with a team who had played three games,” Willis said. “It was our first game, and here we were leaving our bubble to go to another state. There was a lot of what-ifs.

“To me, just standing on the turf field, watching the ball get kicked off, it was almost an emotional victory for us. Just to play that one game, if that’s all we end up playing, to me that was a victory in itself. We’re blessed. Anytime we get to line up and play a football game, I’m blessed for that reason.”

UNA has been transitioning from Division II to Division I, and playing a season this fall is important in staying on schedule with that transition.

“We’ve just got to get the four games in,” Willis said. “The NCAA has told us that.”

And UNA accomplished its mission. The Lions renewed an old rivalry as Jacksonville State left Braly Stadium in Florence with a 24-17 victory on Oct. 17. North Alabama traveled to Southern Mississippi in Hattiesburg and lost 24-13 on Nov. 7. The Lions completed their fourth game on Nov. 21 in Provo, Utah, falling 66-14 to nationally ranked Brigham Young.

Things were not as bright at The Bright Star. The 113-year-old restaurant in Bessemer lost the face of the business in November 2019 with the passing of maître d’ James “Jimmy” Koikos. 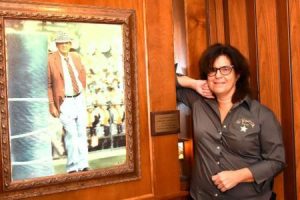 Stacey Craig in the Bear Bryant Room of The Bright Star restaurant in Bessemer. Bryant was an iconic University of Alabama football coach. The 113-year-old restaurant survived the Spanish flu pandemic a century ago. “It’s all about serving the guests,” Craig said. “We’ve had to adapt to serve our guests a different way.” (Solomon Crenshaw Jr.)

The beloved Koikos had devoted nearly 60 years of his life to running the iconic eatery. Family members couldn’t imagine a more difficult time – until the four-generation restaurant experienced a pandemic for the second time.

The Bright Star, which made it through the Spanish flu about a decade into its existence, felt the pain of so many businesses across the state that either shut down or dramatically cut back.

“We had to settle in and adjust our service,” said Stacey Craig, a member of the family. “We were closed in March right after St. Patrick’s Day. March 17 through May 9, we were closed, mandated to be closed.”

But the operation at Third Avenue and 19th Street North in Bessemer adapted, adding curbside orders and stepping up its takeout business.

“We pivoted to curbside service and were able to keep, I think, 20% of the business, and it’s grown over time,” Craig said. “But it’s a challenge. We were fortunate to receive one of the PPP (federal Paycheck Protection Program) loans, which really helped because we had so many people we wanted to keep on payroll and we couldn’t afford to because we didn’t have the money coming in. It kind of gave us capital to keep going while our revenues were down so much.”

The old-school restaurant turned to new ways of doing business, partnering with Uber Eats and DoorDash to enhance its online takeout options.

“That would not have happened on the timetable it did, were it not for COVID,” she said. “We definitely had to respond to the fact that people couldn’t eat here. People couldn’t get out anywhere. That was an adaptation, the online ordering … and, of course, the delivery services.”

The Bright Star had the advantage of 300 seats – enough space to provide social distancing when customers could return. And they have returned.

“We have a lot of loyal customers, and we have people that order from us regularly,” Craig said. “They come here every Friday, every Saturday. We have a lot of that. We’ve been here so long that we have a good customer base.

“It’ll pass. Things always pass,” she said of the pandemic. “In a year and a half, hopefully there will be a vaccine and this will be behind us. In 1918 it passed, so you just have to keep faith and do the best you can. Learn from where you are, and learn from any mistakes you make. It’s all about serving the guests. We’ve had to adapt to serve our guests a different way.”

Mamie Norman is thankful that she celebrated her 101st birthday this year. Fellow members of Birmingham’s Broad Street Missionary Baptist Church feted her with a drive-by celebration, honking car horns and flashing lights as she gave a regal wave from the back porch of the church on Aug. 2, her birthday. 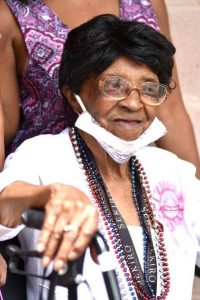 Known to many as Miss Jady, Norman would frequently go to stores before the pandemic, chauffeured there by either of her granddaughters, Pam and Karen Steele. The pandemic has reduced those trips.

Norman is sad because of loved ones who have passed away. That number includes her son, 81-year-old Charles Steele, who died in April (not from COVID-19). But the matriarch of her family doesn’t get angry about death.

Her granddaughter, Pam, who is in her 50s, said she is thankful and blessed.

“Nobody really close to me has come down with the disease,” said Steele, an assistant to the director of media relations in the president’s office at the Shelby County campus of Jefferson State Community College.

“I’ve got a portion of my health and strength. I’ve still got a job to go to. I’ve been able to continue paying all my bills, putting food on the table, no problems with that. I’m blessed other than the loss of my dad, which was a great loss. I’m thankful that I had him as long as I did.”