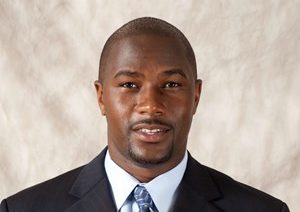 MONTGOMERY – Pinson Valley High School head football coach Sam Shade, who participated in the 1990 Alabama-Mississippi All-Star Classic as a defensive back out of Wenonah, will serve as the Alabama Honorary Captain for next week’s 34th annual game.

The All-Stars for Alabama and Mississippi report early next week to begin preparations for the Dec. 12 noon kickoff at Cramton Bowl. The AHSAA TV Network will televise the game live over its network of cable affiliates in Alabama and the NFHS Network will live-stream the game over its subscriber-based platform.
Shade played in the 1990 Alabama-Mississippi Classic. The Wenonah High School standout was named a Bryant-Jordan Scholar Athlete award winner following his senior year.

He will be coaching in the Class 6A State Championship game tonight when Pinson Valley faces Spanish Fort at 7:30 p.m. at Bryant-Denny Stadium.

Shade played college football at the University of Alabama from 1991 to 1994. He was a member of the 1992 national championship team, and he was named a permanent captain as a senior in 1994. At the conclusion of his playing career, Shade was drafted by the Bengals in the fourth round of the 1995 NFL Draft.

Shade played in the National Football League from 1995 to 2003. He played for the Cincinnati Bengals from 1995 to 1999. Shade led the Bengals in tackles in 1997 and was second in the category in 1998. For his last two seasons in Cincinnati, his defensive coordinator was NFL Hall of Fame coach Dick LeBeau.

Shade played for the Washington Redskins from 1999 to 2003. In April of 2000, Shade won the Redskins’ Unsung Hero Award for on-the-field commitment and community service accomplishment. In the summers of 2000 to 2005, Shade held youth football camps in Washington and Birmingham. He also worked as a color commentator for the NBC Network from 2003 to 2004.

After retiring from the NFL, he served as a volunteer coach at Briarwood Christian School. He also had college coaching stints at Samford University and Georgia State University and more recently served on the Cleveland Browns staff in 2018-19.