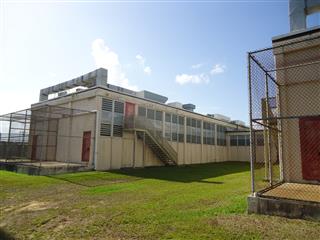 MONTGOMERY, Ala. (AP) — The U.S. Department of Justice filed a lawsuit Wednesday against Alabama over conditions in the state prisons, saying the state is failing to protect male inmates from inmate-on-inmate violence and excessive force at the hands of prison staff.

The lawsuit alleges that conditions in the prison system — considered one of the most understaffed and violent in the country — are so poor that they violate the ban on cruel and unusual punishment. The lawsuit comes after the Justice Department twice in the last two years released investigative reports that accused the state of violating prisoner’s rights.

“The United States Constitution requires Alabama to make sure that its prisons are safe and humane,” Assistant Attorney General Eric Dreiband for the Civil Rights Division, said in a statement announcing the lawsuit.

“The Department of Justice conducted a thorough investigation of Alabama’s prisons for men and determined that Alabama violated and is continuing to violate the Constitution because its prisons are riddled with prisoner-on-prisoner and guard-on-prisoner violence. The violations have led to homicides, rapes, and serious injuries. The Department of Justice looks forward to proving its case in an Alabama federal courtroom.”

Alabama had been in negotiations with the Justice Department since the first report was issued in 2019 in the hopes of staving off the lawsuit.

“This is disappointing news, as the state has actively been negotiating in good faith with the Department of Justice following the release of its findings letters,” Gov. Kay Ivey said in a statement.

“Out of respect for the legal process, we unfortunately cannot provide additional comment at this time. We will, however, push forward with our plan to reimagine and rebuild Alabama’s correctional system from the ground up through the construction of three new regional men’s prisons. The comprehensive efforts underway will go a long way in addressing the long-standing challenges faced by the Alabama Department of Corrections.”

Ivey is proposing to lease three privately built mega-prisons that will each house thousands of inmates.

The Justice Department’s 2019 report described a culture of violence across the state prisons for men. The report described frequent inmate rapes, beatings and fatal stabbings at the hands of fellow prisoners and decried a management system that undercounts homicides and fails to protect prisoners even when warned.

The July report on excessive force noted that at least two inmates died at the end of 2019 after use of force by officers. It listed a litany of incidents including a prison guard beating a handcuffed prisoner in a medical unit while shouting, “I am the reaper of death, now say my name!” as the prisoner begged the officer to kill him.

Sandy Ray last year showed lawmakers a photo of her son, Steven Davis, who died in October 2019 after an altercation with corrections officers at William E. Donaldson Correctional Facility.

“This is my son,” Sandy Ray said as she held his photo. “He is beaten beyond recognition. I had to have a closed casket because of what they had done to him. No one, not even a dog, deserves this.”

U.S. Attorney for the Middle District of Alabama Louis V. Franklin Sr. said “the results of the investigation into safety and excessive force issues within Alabama’s prisons are distressing and continue to require real and immediate attention.”