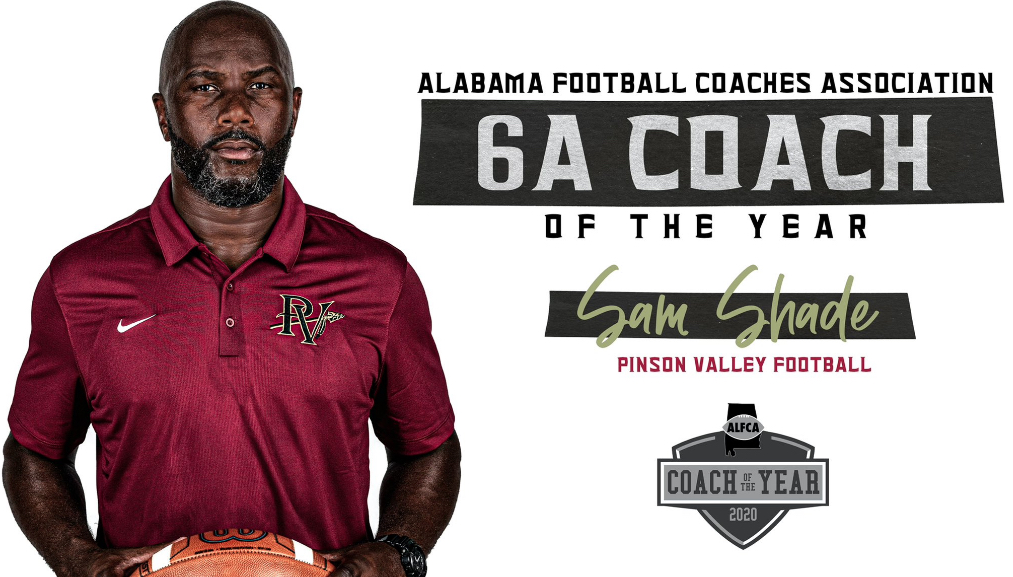 Pinson Valley's Sam Shade has been named the Alabama Football Coaches Association Class 6A Coach of the Year for 2020. Image from Pinson Valley Football Twitter account.

Shade named 6A Coach of the Year after championship run

PINSON — In just one season, Sam Shade has already made his mark on Alabama high school football.

According to a post from the Pinson Valley Football Twitter account on Tuesday, the first-year Indians head coach has been named the Alabama Football Coaches Association Class 6A Coach of the Year for 2020. The announcement comes four days after Shade led his Indians (12-2) to a 23-13 victory over Spanish Fort in the state championship game in Tuscaloosa.

“We had some ups and downs this year, but we came through it as a family and we just kept fighting and I told these guys a long time ago that if we stay together and they believe, that we can do whatever it is that they want to do, and that’s what we did,” said Shade in his postgame press conference from Bryant-Denny Stadium.

Pinson Valley opened the Shade era with a 25-point loss to Hewitt-Trussville in Week 0 and later dropped a 14-13 heartbreaker to Ramsay on Sept. 25, before popping off eight straight wins to close the season. One of those wins came in a forfeit over Mortimer Jordan and in the remaining seven, including the Super 7 comeback over Spanish Fort, the Indians won by an average margin of 25 points per game.

With the threat of COVID-19 looming from preseason workouts all the way through the Super 7 Championships in December, Shade says he urged his players to truly play each game as if it were their last.

“If we made it to Friday night, we always said, ‘This is the only guarantee you have is this game tonight.’ and we just kind of kept that going,” said Shade during Tribune Sports Live Tuesday night. “After a while, it started looking like we were going to be able to play the season, but I think we still kept that same focus of playing one game at a time and don’t have any regrets after any game that you play, because it might be your last.

Shade was hired to replace former Pinson Valley head coach Patrick Nix back in February. Prior to that, he served as an assistant special teams coach with the Cleveland Browns. He also spent time on the sidelines at Briarwood Christian, Samford University and Georgia State.

Great players don’t always make great coaches, but the transition seems to be working for Shade.