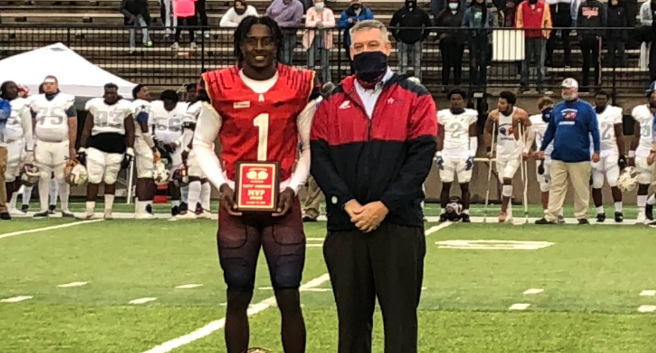 Those five INTs were returned for 120 yards.

Alabama took a 7-0 lead late in the first quarter when quarterback Will Crowder of Gardendale found big-play receiver Christian Lewis of Pleasant Grove in the right corner of the end zone for a 28-yard touchdown to cap  a five-play, 63-yard drive at the 1:33 mark.  Alabama, which 238 total yards in the first half, took a 10-0 lead late in the second quarter when Drake Tabor of Spain Park booted a 25-yard field goal to cap a 14-play, 82-yard drive with 1:07 left before intermission.

McKinstry, a 5-star Alabama commit, turned in the most exciting play of the game on what was unofficially the last play of the first half when he intercepted a Mississippi pass at the Alabama 3-yard line, made an incredible spin move to evade two tacklers and then sprinted 97 yards for a touchdown.  The score was called back on a blind-side block penalty and Alabama got one untimed down for the effort to end the half with the 10-point lead.

McKinstry also had two catches in the first half for 51 yards – including a 43-yarder for the longest reception in the game. He finished with three catches for a team-leading 76 yards. He also had 26 yards in interception returns officially, netting no yards on his 97-yard return due to a penalty and sprinting 26 yards before stepping out of bounds in the final minute to end Mississippi’s last possession.

Mississippi got on the board midway through the fourth when Keyzhawn Lawrence shot free for a 94-yard scoop-and-score that cut Alabama’s lead to 13-7.

Alabama answered right back when Crowder went to Lewis for the pair’s second scoring connection of the game. Lewis made a spectacular grab and tight-roped the end zone line for an 11-yard TD.

Hewitt-Trussville’s Armoni Goodwin led all rushers with 68 yards on 11 carries.