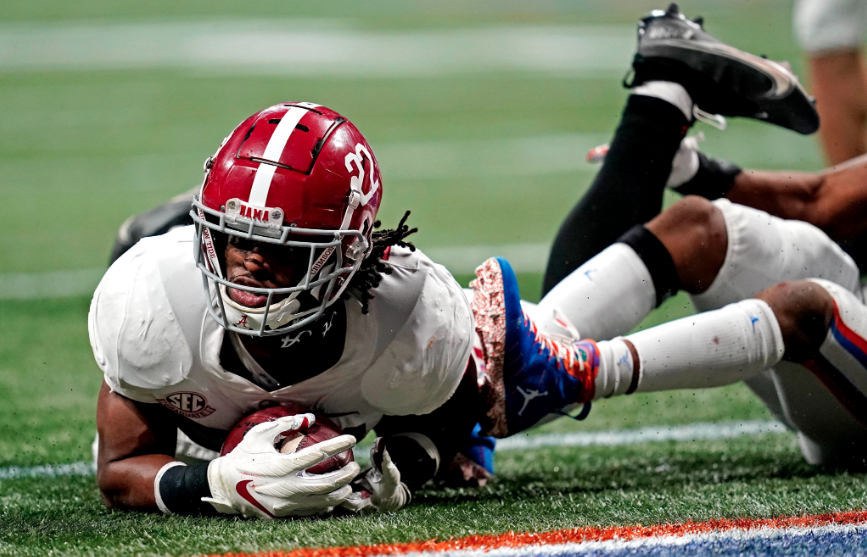 ATLANTA (AP) — In a season of blowouts, Alabama finally got tested. Against a team that just wouldn’t quit, the Crimson Tide required every last point.

Nick Saban needed his offensive stars to shine as bright as they have all season.

Boy, did they ever.

It was just enough to send No. 1 Alabama to the College Football Playoff with a perfect record, holding off No. 11 Florida in a 52-46 shootout for the Southeastern Conference championship Saturday night.

“Those guys are pretty phenomenal. They have been all year,” Saban said. “They certainly delivered tonight when we needed them to.”

The Crimson Tide (11-0, No. 1 CFP) got its toughest challenge in a season of blowouts, but the result was the same. Another win. Now, with one of his best teams yet, the 69-year-old coach heads to the playoff in search of his seventh national title.

“This has been a year with a lot of disruptions,” said Saban, who had his own bout with COVID-19. “The resiliency this team has shown this season to win 11 games is pretty phenomenal.”

After trailing 35-17 at halftime, Florida (8-3, No. 7 CFP) made a game of it with a pair of third-quarter scores. And the Gators fought to the bitter end, adding two more TDs in the fourth period before the clock hit zero.

“We were rolling pretty good,” said quarterback Kyle Trask, who threw for 408 yards and three TDs. “We just ran out of time.”

The senior running back had 31 bruising carries, scoring on plays of 8 and 1 yards and leaping like a hurdler over a defender who tried to go low on a 19-yard run.

Amazingly, Harris was even more dynamic in the passing game. He hauled in five throws for 67 yards, including touchdown plays of 23, 17 and 7 yards in Alabama’s first-half blitz. The shortest of those scoring catches may have been his best, as Harris sent a would-be tackler tumbling to the turf with a dazzling spin move.

“I’ve been catching the ball since birth,” he quipped. ”People don’t expect it because of the running back name, but I can catch.”

Harris set an SEC championship game record with his five touchdowns, breaking the mark of four scored by Auburn’s Tre Mason in 2013. The Alabama senior also knocked off a couple of school records, setting new standards for career rushing TDs (44) and overall TDs (54).

The two quarterbacks did nothing to hurt their standing as two of the leading Heisman Trophy contenders. Neither did Smith, the Crimson Tide’s other top candidate.

After Saturday night’s performance, Harris should probably be in the mix as well.

“I’m not worried about that,” he said. “The two guys we’ve got up there now is good enough.”

In addition to catching all those passes, Smith came up with a key fumble recovery after Florida’s Trey Dean picked off a throw from Jones, snatching the ball away from the intended receiver, only to cough it up on a brutal, blind-side hit by Alabama receiver John Metchie.

Jones threw a 31-yard touchdown pass to Smith on the very next play.

Trask was 26 of 40 with a 51-yard scoring pass early on to Kadarius Toney, who finished with eight receptions for 153 yards. The Gators quarterback also hooked up with Trevon Grimes on a 50-yard touchdown throw, in addition to scoring one of his own with a 1-yard run.

Give Florida credit: Coming off a shocking home loss to LSU, the Gators fought to the very end.

“I thought we showed a lot of character,” coach Dan Mullen said. “That was an excellent team we played … give them credit. That’s why they’re ranked No. 1 in the country.”

The final quarter was thriller for the socially distanced crowd of 16,520 scattered throughout the 75,000-seat stadium.

After Harris’ lunged over from the 1 for final TD to extend Alabama’s lead to 45-31, the Gators responded with a nine-play, 75-yard scoring drive that culminated with Damien Pierce’s own 1-yard touchdown plunge.

Alabama’s high-powered offense struck right back. Harris ripped off a 29-yard run deep into Florida territory, and Smith finished it off by hauling in a 15-yard scoring pass from Jones after a play-action fake to Harris froze the Gators defense.

Florida had one more big drive in its arsenal, zipping down the field on another 75-yard possession that ended with Trask lofting a 22-yard TD pass to his star tight end, Kyle Pitts. Trask then ran for a two-point conversion.

That would be the last gasp.

Alabama recovered an onside kick and ran out all but the final 16 seconds. Trask was sacked on the final play of the game.

After missing the College Football Playoff a year ago for the first time since the four-team format was adopted in 2014, the Crimson Tide is back in familiar territory with an offense that averages nearly 50 points a game and seemingly has too many weapons for just 11 men to stop.

Alabama may have to carry on in the playoff without fifth-year center Landon Dickerson, who went down late in the game with a knee injury.

He had to be carted off the field, though he did return for the post-game celebration on crutches.

“I don’t know the extent of it. He’ll have an MRI tomorrow to find out,” Saban said. “It’s pretty serious, I think. We don’t know for sure how serious.”

Alabama: The Crimson Tide defense will surely face some questions after giving up six touchdowns and 462 yards to the Gators. But it’s going to be difficult for anyone to knock off a team that ripped through a top SEC opponent for 33 first downs and 605 yards.

Florida: The Gators might’ve pulled off the upset if not for some crucial mistakes in the first half. It’s hard to fault Dean for his fumble that gave the ball right back to the Alabama — which scored on the very next play. But Florida also had two silly penalties on apparent third-down stops, extending a pair of drives that turned into touchdowns.

Florida: Despite two straight losses, the strong performance against Alabama could be enough to earn a New Year’s Six Bowl bid.

Alabama: Surely headed to the Sugar Bowl for one of the two semifinal games on Jan. 1.