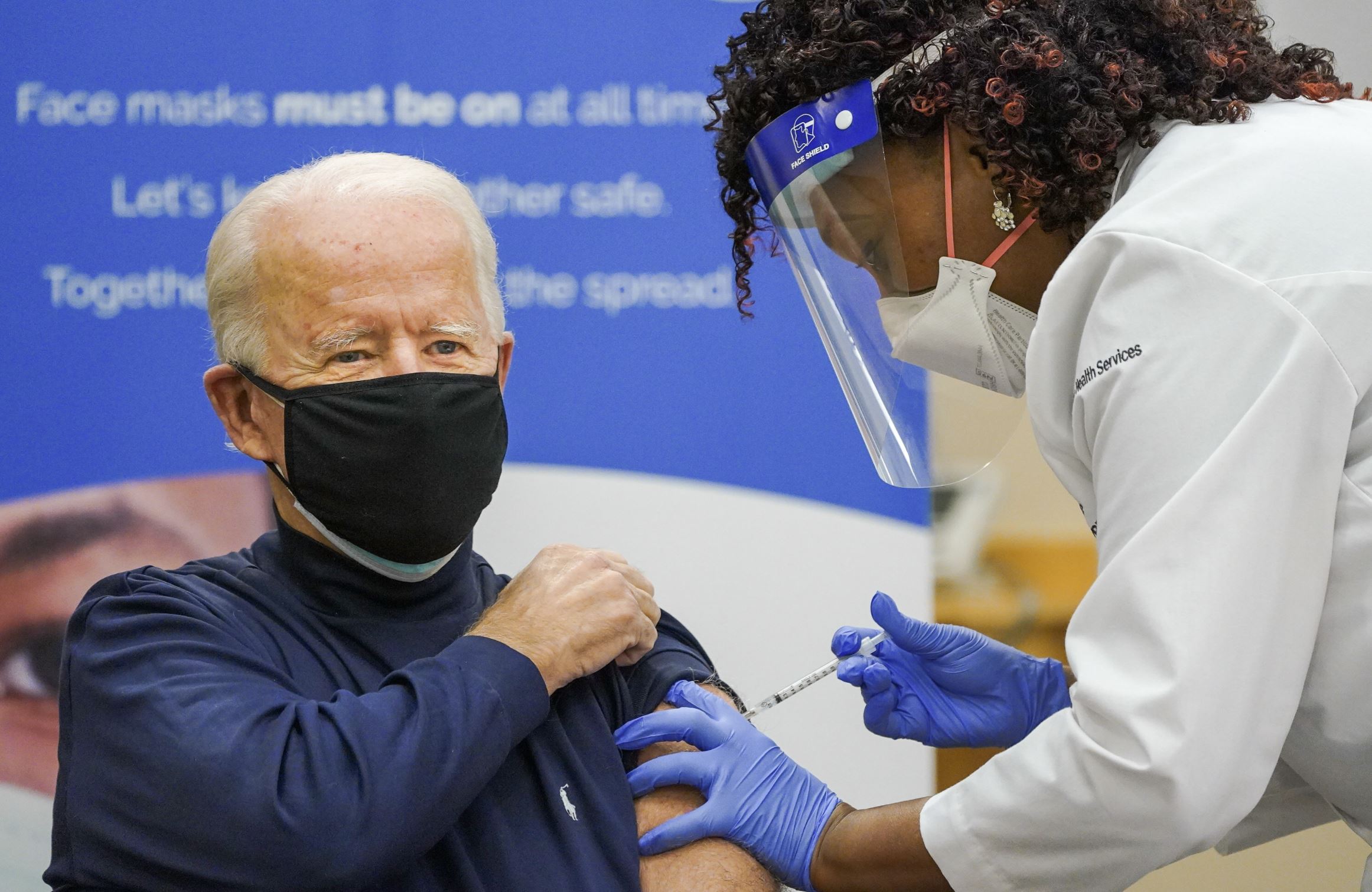 Biden gets COVID-19 vaccine, says ‘nothing to worry about’

NEWARK, Del. (AP) —  Joe Biden on Monday received his first dose of the coronavirus vaccine on live television as part of a growing effort to convince the American public the inoculations are safe.

The president-elect took a dose of Pfizer vaccine at a hospital not far from his Delaware home, hours after his wife, Jill Biden, did the same. The injections came the same day that a second vaccine, produced by Moderna, will start arriving in states. It joins Pfizer’s in the nation’s arsenal against the COVID-19 pandemic, which has now killed more than 317,000 people in the United States and upended life around the globe.

“I’m ready,” said Biden, who was administered the dose at a hospital in Newark, Delaware. The president-elect rolled the left sleeve of his turtleneck all the way up to his shoulder, then declined the option to count to three before the needle was inserted into his left arm.

“You just go ahead anytime you’re ready,” he told the nurse practitioner who administered the shot.

Biden emphasized the safety of the vaccine, and said President Donald Trump’s administration “deserves some credit” for getting the vaccine distribution process “off the ground.”

“I’m doing this to demonstrate that people should be prepared when it’s available to take the vaccine,” he added. “There’s nothing to worry about.”

He noted, however, that distributing the vaccine is “going to take time,” and urged Americans to take precautions during the holiday season to avoid the spread of the virus, including wearing masks.

“If you don’t have to travel, don’t travel,” he said. “It’s really important.”

Biden also thanked health care workers and offered praise and an elbow bump to Tabe Mase, the nurse practitioner who administered his first dose of the vaccine.

Kamala Harris and her husband are expected to receive their first shots next week.

Other top government officials have been in the first wave of Americans to be inoculated against COVID-19 as part of the largest vaccination campaign in the nation’s history.

Vice President Mike Pence, House Speaker Nancy Pelosi, D-Calif., Senate Majority Leader Mitch McConnell, R-Ky., and other lawmakers were given doses Friday. They chose to publicize their injections as part of a campaign to convince Americans that the vaccines are safe and effective amid skepticism, especially among Republicans.

President Donald Trump is discussing with his doctors the timing for taking the vaccine, the White House has said. He tweeted earlier this month that he was “not scheduled” to take the vaccine but that he looked “forward to doing so at the appropriate time.”

The White House has offered another reason for waiting, saying Trump was showing support for the most vulnerable to get the vaccine first.

Trump was hospitalized with COVID-19 in October and given an experimental monoclonal antibody treatment that he credited for his swift recovery. A Centers for Disease Control and Prevention advisory board has said people who received that treatment should wait at least 90 days to be vaccinated to avoid any potential interference.

Dr. Anthony Fauci, the nation’s top infectious diseases expert, and other experts have recommended that Trump be vaccinated without delay as a precaution.