LATEST NEWS
Home Coronavirus Latest Gov. Ivey gets vaccine, calls it ‘a safe thing to do’ 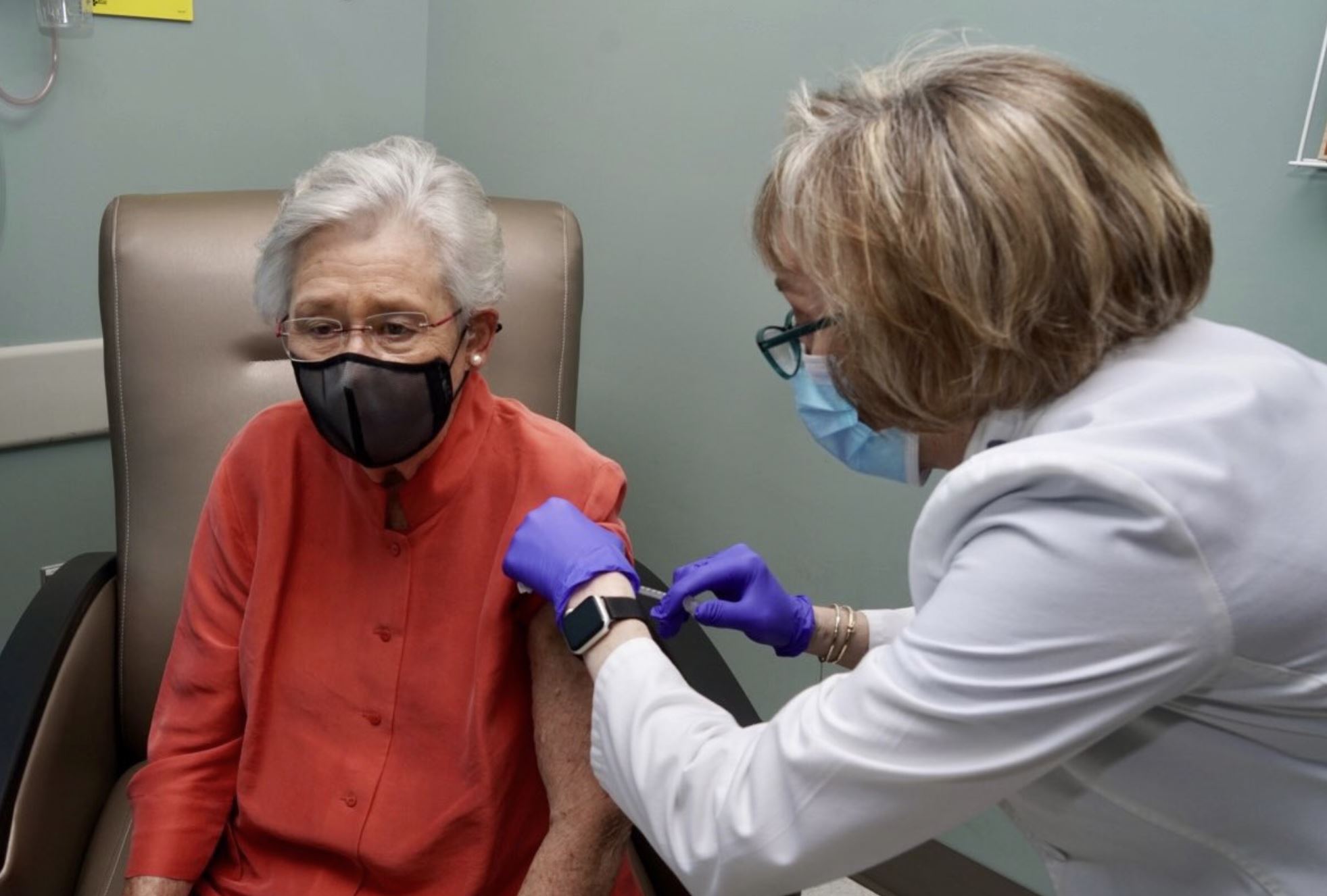 Gov. Ivey gets vaccine, calls it ‘a safe thing to do’

MONTGOMERY, Ala. (AP) — Alabama Gov. Kay Ivey became one of the first governors on Monday to receive the COVID-19 vaccine, bidding to build public confidence in the vaccinations that will have to be widely administered to ease the pandemic.

“We want to send a clear message to all Alabamians that we can have confidence in this vaccine and its effectiveness. I want to assure people it is a safe thing to do and if everybody will take the vaccine voluntarily we’ll have good strong immunity and it will stop COVID-19,” Ivey said at a news conference.

The 76-year-old Republican governor, a lung cancer survivor, said she had no hesitation about taking the vaccine and urged others to take it as it becomes available. “Shoot, a sore arm for a few days is a lot better than three months on a ventilator,” Ivey said.

Alabama is seeing a record-setting surge in COVID-19 in the wake of Thanksgiving and officials fear things will only get worse because of Christmas holiday gatherings.

With more than 2,520 patients hospitalized statewide for COVID-19 and cases increasing steadily, Christmas week began in Alabama on Monday with health officials issuing new pleas for residents to take precautions in hope of avoiding a post-holiday catastrophe.

“I’m very concerned about it. I don’t think we can stand to have a Christmas that resembles what happened at Thanksgiving. Alabama hospitals are packed,” Harris said.

Ivey said she was downsizing her Christmas celebration and urged people to “just use good common sense.”

Harris said about one in every 10 people who become infected with COVID-10 end up in the hospital. While the overall mortality rate is under 1.5%, it jumps to about 20% for people over age 75, Harris said.

The illness caused by the new coronavirus already has killed more than 4,380 people statewide, and the 14-day rolling average for new cases is roughly double what it was in the summer at the previous high point in the state.

Dr. James Boyle, a pulmonologist in Decatur, described a dire situation in north Alabama, where cases are increasing at a quicker pace than elsewhere in the state. In Huntsville alone, he said, 500 new cases were confirmed last week, and multiple people are on ventilators.

More mask wearing and social distancing could help prevent an even worse spike, he said.

“Our ICU is full and I am praying for a Christmas miracle,” he told a news briefing. “I hope the forecasts models are wrong. I pray the numbers of infection and death go down after Christmas.”

Boyle said it’s disappointing to go inside stores and see people without face masks or any regard for social distancing after so much illness and death. While some advocate stricter measures than the state’s mandatory mask rule, Boyle said he didn’t know if that would help.

“People have to decide if they care about others,” he said.

More than 324,000 people in Alabama have tested positive for the coronavirus, and researchers at Johns Hopkins University said the rolling average number of daily new cases has increased by 638, a jump of almost 20%, over the last two weeks.

The virus causes only mild or moderate in most people, but it can be deadly for people with underlying health problems.