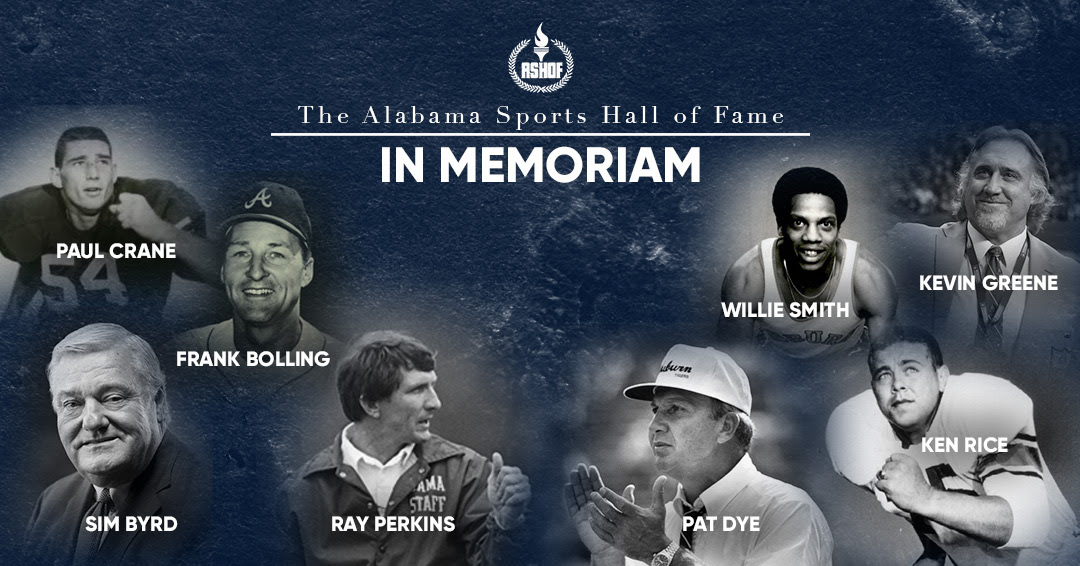 The Alabama Sports Hall of Fame remembers the inductees lost during the year 2020.

ASHOF remembers each man with a brief memoir below.

Born November 16, 1931 in Mobile, AL. Frank Bolling started his baseball career in 1951 and played on five minor league teams before playing for the Detroit Tigers from 1954-60. In 1958 and 1959 he led the American League in fielding. In 1958, he was awarded the Gold Glove Award. He played for the Milwaukee Braves from 1961-65. In 1961 and 1962 Bolling led the National League in fielding. He was selected four times as an All-Star in his career and his lifetime batting average was .256.

Born October 11, 1945 in Montgomery, AL. Sim Byrd played quarterback at Troy State (now Troy University) and led the team to the NAIA National Championship in 1968. That same season he led the NAIA in passing yards (3,042), completed 221 of 350 passes for 30 touchdowns and had a completion percentage of .643. He also led the nation in punting average with 45.4 yards per punt. He was a consensus First Team All-American in his division. For his career he threw for 7,092 yards, completed 536 of 860 passes for a pass completion percentage of .623, and threw for 68 touchdowns. He was named captain of the 1967 and 1968 squads and was selected Most Valuable Player of both the semi-final and championship games in 1968. He was the first Troy football player to participate in the Blue-Gray All-Star Classic. In 2005 he was inducted into the NAIA Hall of Fame.

Born January 29, 1944 in Pascagoula, MS. In 1961, Paul Crane was named an All-State Center/Linebacker at Vigor High School. He signed with the University of Alabama and played in four bowl games under Coach Paul “Bear” Bryant. The teams of 1964 and 1965 were named National Champions. He was All-SEC in 1964 and 1965, and All-American in 1965. He played for seven years with the New York Jets (1966-73). He played with the 1969 Jets team that beat the Baltimore Colts in the Super Bowl. He was voted “Most Popular Jet” in 1970. From 1974-78, he served as an assistant coach at the University of Alabama and from 1978-81 he was an assistant at Ole Miss. He is honored with the Paul Crane Offensive Lineman Award that is given each year at the end of spring practice.

Born November 6, 1939 in Blythe, GA. Pat Dye was an All-American guard at the University of Georgia and was also named an Academic All-American. Following an Army tour of duty, he played two years in the Canadian Football League. In 1965, he joined the coaching staff of Paul “Bear” Bryant at the University of Alabama where, during the next nine years, he was part of two national championships. After head coaching stops at East Carolina and Wyoming, he was named the head coach at Auburn University in 1981. During the 1980s, he established one of the premier programs in the country, winning or sharing four SEC titles with an 81-25 record. He retired from coaching at the end of the 1992 season.

Born July 31, 1962 in Schenectady, NY. Greene played collegiately at Auburn University and was drafted in 1985 by the Los Angeles Rams in the fifth round. He went on to play in the Pro Bowl five times, was chosen in 1996 as the NFC Linebacker of Year and received the prestigious George Halas Defensive Player of the Year award. He finished his career as the all-time NFL sack leader for linebackers and ranked third overall in career sacks with 160. He is one of three players to lead the NFL in sacks in multiple seasons (1994 with the Pittsburgh Steelers (14) and in 1996 with the Carolina Panthers (14.5)). He is one of only three players in the NFL to have 10 sacks per season for 10 years. He also played in Super Bowl XXX with Pittsburgh. In 2016, he was inducted into the Pro Football Hall of Fame.

Born November 6, 1941 in Mount Olive, MS. From 1964-66 he was a wide receiver at the University of Alabama. During this time, Alabama compiled a 30-2-1 record, including two national championships and three SEC titles. As a senior, he was team captain, SEC Player of the Year, and All-American. He played in two Orange Bowls and one Sugar Bowl, and set records in both. He was drafted by the Baltimore Colts and played five years there. He played in Super Bowl III in 1969 and Super Bowl V in 1971 when the Colts were Super Bowl champions. In 1979, he was named head coach of the New York Giants. In 1983, he returned to the University of Alabama as head coach and coached there until 1986. He was later head coach of the Tampa Bay Buccaneers and Arkansas State University. He also coached for the Patriots, Browns, and Raiders.

Born September 14, 1939 in Bainbridge, GA. Ken Rice played collegiately at Auburn University and was named a consensus All-American tackle his junior and senior year. He was twice named Most Valuable Offensive Lineman in the SEC, as well as Most Valuable Defensive Lineman, and was chosen All-SEC for three straight years. He captained Auburn’s 1960 team. He was the first player drafted in both the American Football League (AFL) and the National Football League (NFL) in 1960, playing seven years for the Buffalo Bills, Oakland Raiders, and the Miami Dolphins. In 1961, he was selected to the first AFL All-Star team as a rookie. He was elected to the Auburn All-Century Team and was inducted into the Auburn Tiger Trail.

Born February 28, 1956 in Rochester, PA. Smith was the Track and Field News 1974 National High School Athlete of the Year at Uniondale High School on Long Island. He attended Auburn University where he ran the 100m and 400m. Along with fellow Auburn teammate Harvey Glance, he earned a spot representing the U.S. Track & Field team at the 1976 Olympics in Montreal. He was a two-time NCAA 400-meter champion (1977 and 1978), and in 1978 earned Auburn University’s top honor as Athlete of the Year. After graduation, he won the U.S. 400-meter championship (1979, 1980) and the World Championship as a member of 4×400-meter relay team (1979-81). His hopes of an Olympic Gold Medal were ruined in 1980 when, after making the U.S. Team, he had to sit out the competition when the U.S. boycotted the games. However, he later won a gold medal as a member of the 4×400 relay team at the 1984 Summer Olympics in Los Angeles.