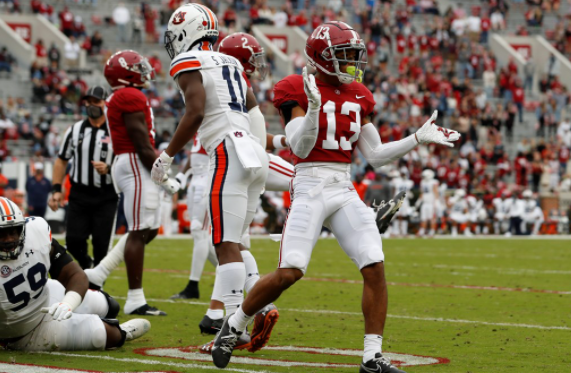 ARLINGTON, TEXAS — It was a strong showing for the Alabama football team on Friday night, as the top-ranked Tide rolled by No. 4 Notre Dame 31-14 in the Rose Bowl, securing its spot in the College Football Playoff National Championship Game on Jan. 11, 2021.

However, a key player was missing from Nick Saban’s secondary throughout the contest. His starter at the Star position, Malachi Moore, never took the field in Arlington, Texas, although he was fully dressed out on the sidelines.

“Malachi Moore is day-to-day,” said Saban. “He injured himself a little bit in the Florida game. He was able to practice on and off. It’s the type of injury that exercise aggravates it. He wasn’t able to go today.”

Starting in his place on Friday was fellow freshman Brian Branch, who finished with three tackles and a pass breakup.

Moore, in his first season out of Hewitt-Trussville, was selected to the SEC All-Freshman Team after recording three interceptions and 27 solo tackles in 11 games. He has provided big-play potential to the Alabama defense this season — a service he displayed on Oct. 24 when he forced a fumble and returned it 28 yards for a touchdown against Tennessee.

His status is not clear as the Crimson Tide prepares for No. 3 Ohio State in the CFP National Championship Game in Miami Gardens, Fla. On Jan. 11.