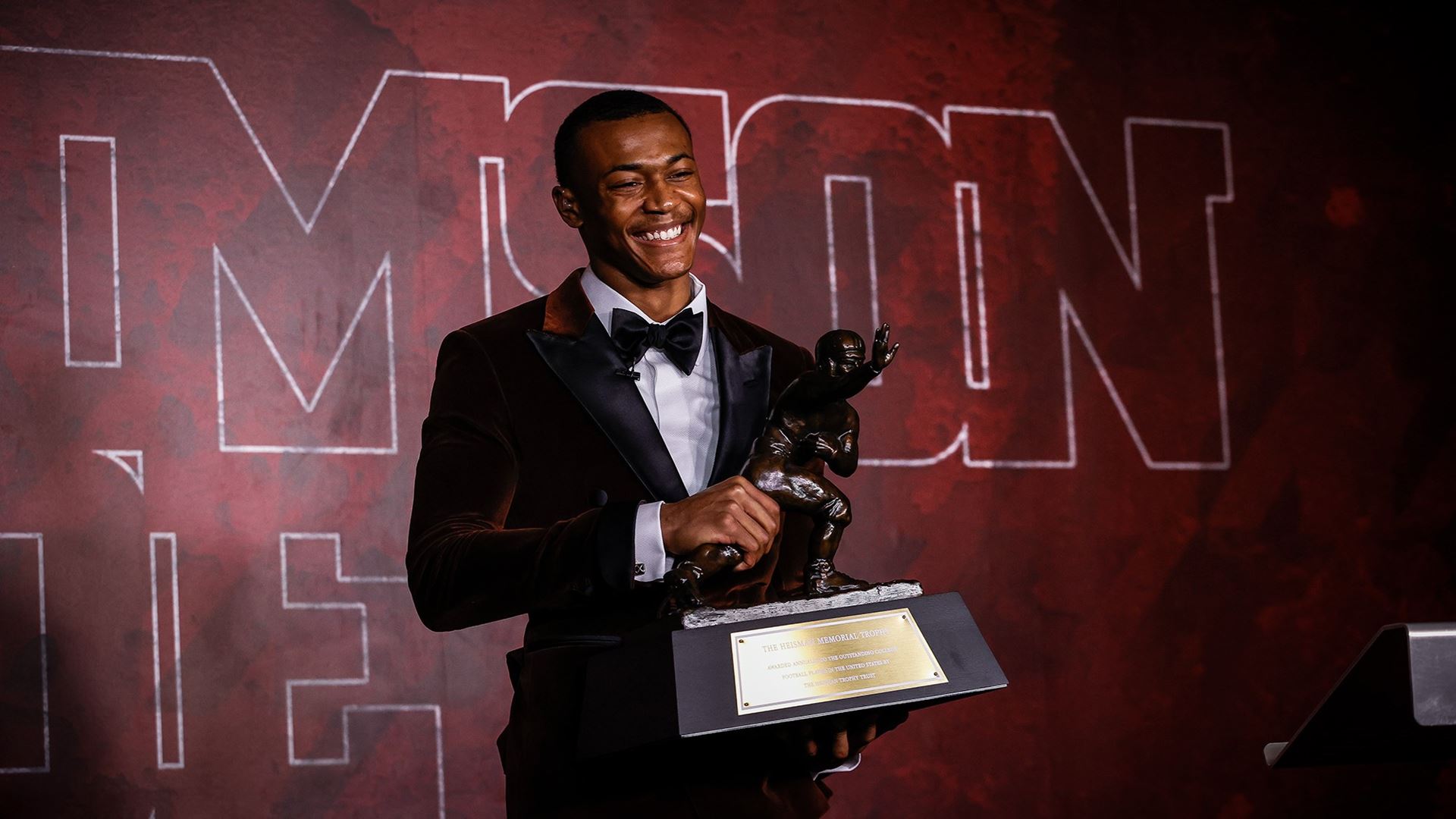 NEW YORK (AP) — On an Alabama team stacked with stars, DeVonta Smith emerged as the best player in college football.

Smith became the first wide receiver to win the Heisman Trophy in 29 seasons Tuesday night, breaking the monopoly quarterbacks have had on college football’s most prestigious award by beating out three of them.

The Crimson Tide senior is the fourth receiver to win the Heisman, joining Michigan’s Desmond Howard in 1991, Notre Dame’s Tim Brown in 1987 and Nebraska’s Johnny Rodgers in 1972.

Quarterbacks had won 17 of the previous 20 Heisman trophies, including the last four.

Smith is the third Alabama player to win the Heisman, all since 2009. Like Tide running backs Mark Ingram (’09) and Derrick Henry (2015), Smith will play in the national championship game as a Heisman winner.

No. 1 Alabama faces No. 3 Ohio State on Jan. 11 in the College Football Playoff title game in Miami Gardens, Florida.

The Heisman voting was complete on Dec. 21, so playoff performances were not a factor. But Smith made those who supported him feel good about it with a brilliant three-touchdown game against Notre Dame in the CFP semifinals last weekend.

Smith has 105 catches for 1,641 yards and 22 total touchdowns going into the final game of his college career — which will also be his third national championship game.

Smith carved out a place in Alabama’s storied history as a freshman, catching the winning 41-yard touchdown pass from Tua Tagovailoa in overtime against Georgia to give the Tide the 2017 national championship.

For the next two seasons, Smith was still often the overlooked star in the Tide’s talented 2017 class of receivers that included All-American Jerry Jeudy and Henry Ruggs. Both of those players decided to skip their senior seasons and enter the draft last year. Both were selected in the first round.

Smith returned to school to complete his degree and form an explosive combination for the Tide with junior Jaylen Waddle. Then Waddle went down with a season-ending leg injury on Oct. 24.

As the Tide’s undisputed No. 1 receiver, Smith shined. The week after Waddle went out, Smith had 11 catches for 204 yards and four touchdowns against Mississippi State.

Smith’s soaring one-handed TD grab against LSU was not just his signature play, but one the 2020 season’s best.

A former four-star recruit from Amite, Louisiana, Smith came to Tuscaloosa from LSU’s backyard, disappointing the many Tigers’ fans in his hometown.

He had only seven receptions as a freshman, and while he scored the winning touchdown in the national title game, the story was of the game was the guy who threw it.

Tagovailoa was Alabama’s Heisman contender for the next two years.

The understated Smith quietly led the Tide in receptions and yards last year as a junior and became a second-team All-American.

Smitty — as teammates and coaches call him — didn’t emerge as a Hesiman contender this season until Waddle went down.

Starting with that Mississippi State game, Smith went on a four-game tear with 35 catches for 749 yards and 11 touchdowns that solidified another nickname for the 6-foot-1, 175-pound technician: the Slim Reaper.

Whatever you want to call Smith, he’s been quite a catch for Alabama.