PINSON — During the Jan. 7, 2021, Pinson City Council meeting, Councilor Dawn Tanner announced a tentative date for a parade to honor the 2020 Pinson Valley High School football team for winning the 6A State Championship game. The parade is tentatively scheduled for Saturday, Jan. 16, 2021, at 10:30 a.m.

“We will meet at Winn-Dixie at 10 o’clock, the parade will start at 10:30,” she said. “This will be for the varsity football team, the cheerleaders and the band. We’re going to do it different this year. Instead of going to Bicentennial (Park), we’re going to go back to the stadium and the mayor and council will present the declaration we did last week.”

At the end of the parade, the team and coaches will be presented with copies of Resolution 20-62, which was passed on Dec. 29, 2020. The resolution states “the 2020 Pinson Valley High School football team had another exceptional season, concluding with the Alabama 6A State Football Championship” and “this team represented Pinson Valley High School, the City of Pinson, and all of Jefferson County with superior skills and in a sportsmanlike manner.” 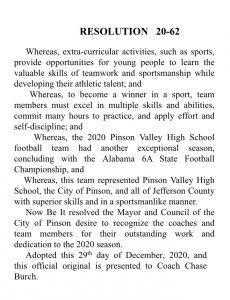 Additionally, Tanner offered a motion to approve the purchase of championship shirts for the PVHS football team, coaches, support personnel, school administrators, band and cheerleaders, for the amount of $4,605.50. The motion passed unanimously.

“We’re a city of champions, so we might as well show it,” Tanner said.

During Thursday’s meeting, the council also approved funds for the resurfacing of the PVHS baseball and softball fields, by Game Day Athletic Surfaces. The cost to resurface the baseball field will be $6,000.

“We asked the city, Mayor Cochran, … I’ve kind of been bugging him, been in his ear for a while for my guys about our field,” Head Coach John Gluschick said. “It’s been unkept for a while – I guess since COVID hit last year – and it’s kind of slipped and faded away, but we want to get it looking nice again. The plan is, they are going to come in, Game Day Athletics, they’re going to put 48 tons of Turface mix on the infield dirt. They are going to laser it and make sure everything is nice and level, and ultimately, when that’s all finished, it’s going to be a nice-looking product, infield-wise. Probably the most important thing is going to be safety because everything is going to be level.”

Mayor Joe Cochran said that the money will come out of the city’s school allocation fund, which currently has $67,000.

“We appreciate it a lot because the field was in bad shape when everything went down,” PVHS baseball player Douglas Tews said. “We could get out there and try to work things up, but we just didn’t have enough help, we didn’t have the funds, so it means a lot to us.”

The resurfacing of the softball field will cost $3,650, but the city voted to allocate a total of $4,763.62 to the softball team to cover the expense of additional needs.

“Softball is coming to us today for assistance, as well, and part of it is the same kind of stuff, exactly like what baseball is getting, but their field is much smaller and requires a lot less surface,” Cochran said. “So, the expense of that is $3,650, and then there were some equipment add-ins on that too, which added up to a total of $4,763.62.”

Cochran informed the council that the city received a COVID-relief reimbursement check from the federal government’s Cares Act on Jan. 6.

“The Cares Act money was made available by the federal government and, in Jefferson County, administered by the Jefferson County Commission for municipalities in Jefferson County with the exception of Hoover and Birmingham – perhaps there were another one or two – but overall, doing most of the hard work for all of us,” Cochran said. “We submit what we believe is money that could be refunded based on the criteria they laid out. “When it’s all said and done, there’s a certain number of dollars and cents placed in that fund with our name on it, but we had to back into that fund.

“That being said, it was something we worked very diligently with upon coming into office. We had about a week remaining on our time to qualify. We spent that week, most of it, really working hard to figure out where we could find those funds. There were some previously sought before my arrival, but since then, we added a lot more to it.”

The city submitted for funds in the range of $333,000+, and received the full amount. The city plans to put these funds into a savings account for the period of a year.

“When (Mayor Cochran) got here, he had about a week and went with both feet running,” Tanner said. “Prior to his arrival of coming into office, we had only turned in, we only had receipts for about $25,000. So, that’s a huge difference from that to $333,000. So, kudos to the mayor for making phone calls, finding out what we could file claim on, and thanks to Anjelea May for getting the paperwork done. … I want to give credit where it’s due that the mayor did a really good job on trying to find money that we could request.”

In other city business, the council attended to the following: