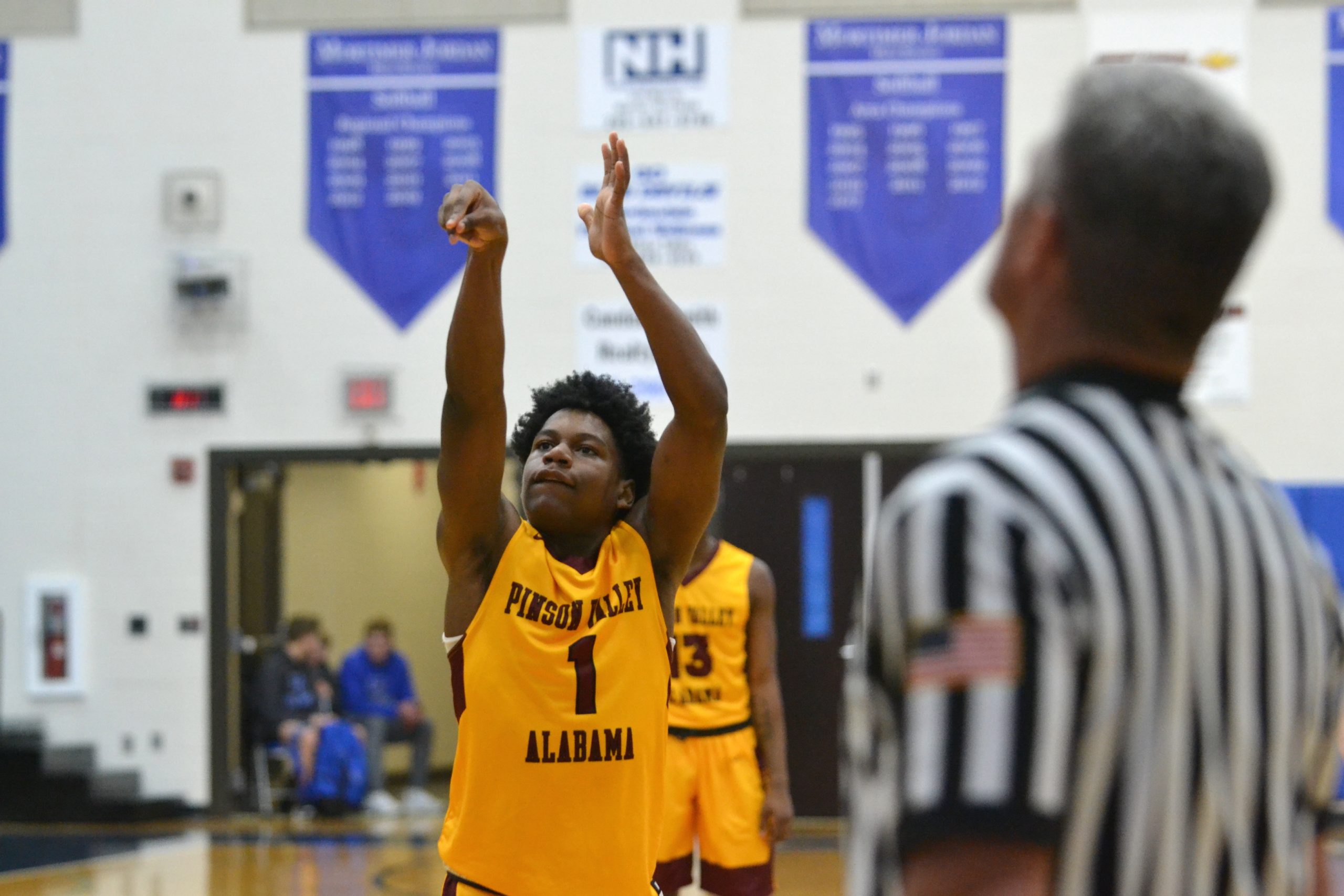 Pinson Valley freshman Caleb White follows through on a free-throw attempt during a game at Mortimer Jordan on Jan. 5, 2021. Photo by Erik Harris

The Moody boys on Monday completed the season sweep of St. Clair County with a 50-29 victory, which follows a 49-47 decision over the Saints last Friday night.

The Pinson Valley boys have been on a tear that continues with two more wins already this week. The second-ranked Indians (15-2, 4-0) started on Monday with a 56-53 overtime victory over No. 3 Shades Valley in the MLK Roundball Classic at Fairfield.

Point guard JoJo James was a factor against the Mounties with his 18 points and six boards. Fellow senior Joshua Williams added 13 points while freshman Caleb White sank a go-ahead 3-pointer in overtime and finished with 10 points.

The Indians returned to Class 6A, Area 12 play on Tuesday with an 80-36 thrashing of Mortimer Jordan. White continued making shots on Tuesday to the tune of 22 points in the win. Moe Calloway posted 14 points and Isaiah Sims added a double-double with 13 points and 10 boards for Pinson Valley.

The Springville boys rebounded their way to a 23-point victory over Leeds on Tuesday night.

The Tigers (20-3, 4-1) outrebounded the Green Wave 37-18 and outscored them 57-34 in non-area play. Springville senior Pearson Baldwin connected on six of his nine shots to lead all scorers with 15 points on Tuesday.

He had nine points of help from Gavin Gooch and seven more from Amari Cowan.

Springville also captured a 59-27 win over Ashville on Monday.

The Pinson Valley girls dropped a 49-38 Class 6A, Area 12 loss to No. 8 Mortimer Jordan on Tuesday. For the Blue Devils, Sara Archer scored 17 points to go with 13 points from Samantha Archer.

The Clay-Chalkville girls beat Gardendale 49-13 on Tuesday night in Class 6A, Area 12 play.

The Clay-Chalkville boys took down the visiting Rockets 63-48 on Tuesday.