TRUSSVILLE — The Trussville City Council met for a workshop and regular meeting on Thursday, Jan. 21, 2021.

Councilor Ben Short was not in attendance due to work obligations but all measures were passed unanimously by councilors at the meeting.

An ordinance to install a four-way stop and pedestrian crosswalk at Bethune Parkway and Caldwell Drive was among those measures. The move comes after a recommendation by the city’s Public Safety Committee. According to Police Chief Eric Rush, about 3,000 vehicles travel through the intersection every day.

“This is really to control traffic at that intersection and to allow pedestrian foot traffic,” Rush said.

The council also approved an ordinance to establish a Cemetery Rehabilitation Authority. The board will consist of four members plus a city council liaison who will act as a voting member. City Attorney Rick Stotser said he has spoken to Eddie Seal from Jefferson County Memorial to review documents relating to the authority because of his experience in such matters.

“It’s to form a board and take over maintenance and all of the stuff they have to do for Mount Nebo and the Baptist Cemetery across the way and any other cemetery that may be formed in the future in the city,” said Councilor Jaime Anderson. 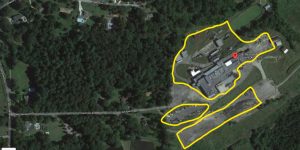 “Goldkist” Property to be leased to company for temporary storage purposes. Photo: City of Trussville.

A resolution to declare city property at 7200 Will Pond Road, commonly known as the “Goldkist property” a surplus was passed. The property will be leased to SCA Performance, Inc. for storage purchases. According to Mayor Buddy Choat, the company will provide 24-hour security during the short-term lease.

“They have several hundred vehicles and they were looking for a place to store them,” Choat said. “The only place we have that has enough room for that is Goldkist.”

If at any time the city needs to use the property, the lease states they can terminate the lease with a 30-day notice.

In other business, the council voted to renew a Synovus Bank line of credit of up to $6,000,000 that the city has had for several years. The line of credit does not have to be used but can be in the event the city needs the funds.

The city council approved a resolution to enter into a stage management agreement with Ferus, LLC, for the use of the stage in the city’s downtown Quad I area. The one-year agreement will allow Ferus to schedule events on the city asset. Ferus will operate, manage and promote the venue and will book acts, according to the agreement. The agreement states that the city’s hope is that the stage area will attract people to the city.

Choat said other similar venues are made to pay a marketing firm to do the job that Ferus owner Coby Lake is offering to do free of charge.

“We even thought about picking up trash and stuff in the area and Coby said if he is going to have people out there working, they can just do it,” Choat said during an interview in November.

Stotser said with the COVID-19 pandemic, it would be difficult for the city to book any events for the foreseeable future, but the city does have the right to schedule events on the stage.

anyone interested in booking the stage for an event must contact Ferus. There is also a contracted company available to operate the stage lights and sound equipment for $350 per event, although Choat said the company has agreed to work with the public to make the price accessible.

For now, Ferus will book at least 20 local and regional acts.

The full agreement can be read below.

Items approved as part of the consent agenda were:

Exh A - Stage and Venue Arrangement Services Agreement and License