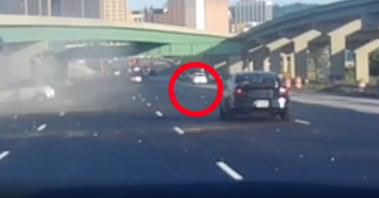 BIRMINGHAM — The Birmingham Police Department continues to investigate a fatal hit-and-run that involved a tractor-trailer and two smaller vehicles on Oct. 6, 2020.

Sergeant Rodarius Mauldin said the department is seeking the public’s assistance in identifying the driver responsible for the death of 59-year-old Charles Eugene Pearce Jr.

The Gulf Shores man was killed that Tuesday when his truck was knocked off an Interstate 65 exit ramp, causing it to fall onto I-59/20. Pearce was pronounced dead on the scene.

According to a news release from BPD, the crash was caused by a white Nissan Cube that struck a silver sedan. The silver sedan then collided with Pearce’s tractor-trailer, causing it to crash through the concrete median and fall onto the I-20/59 southbound interstate below.