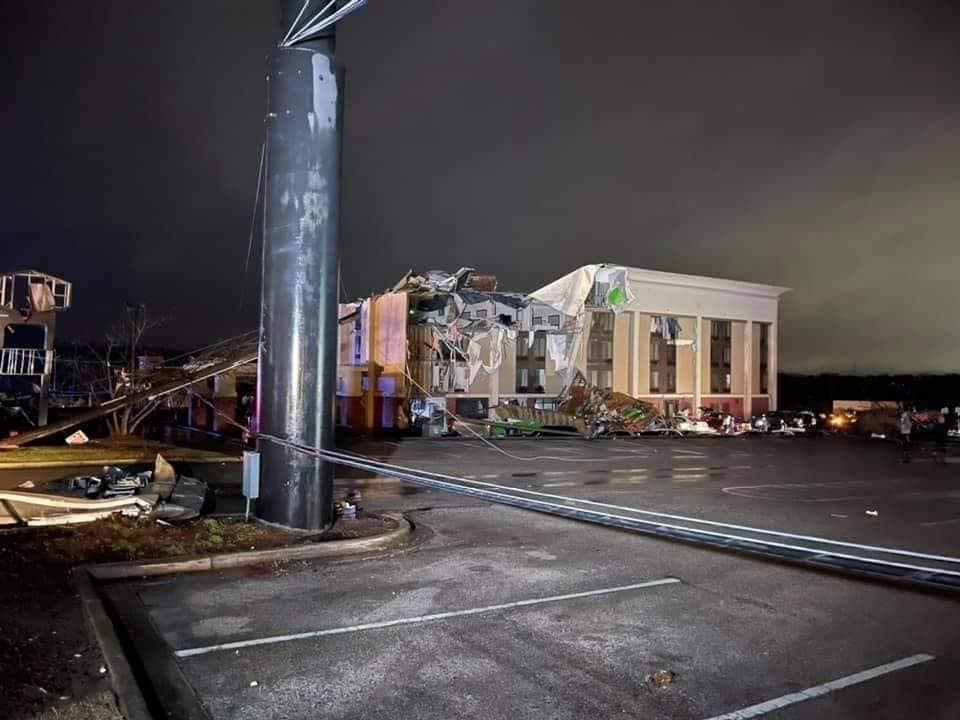 CENTER POINT — The National Weather Service in Birmingham upgraded the tornado that hit the Fultondale area to an EF-3. Damage was reported primarily north of Walker Chapel Road NW to U.S. Highway 31 and to New Castle Road. Crews said winds were at least 150 mph on the evening of Monday, Jan. 25, 2021.

“Keep in mind that intensity & width varied along its path,” the NWS posted on Facebook. “The EF-3 damage was focused near Lykes Blvd. to New Castle Rd.” 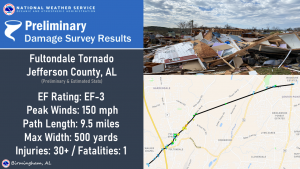 The tornado had a path length of 9.5 miles and a max width of 500 yards, according to the NWS.

One person was killed when the tornado hit Fultondale. Around 30 people were injured. Major structural damage was reported in Fultondale and Center Point and other damage was seen in Clay.

In Fultondale, a 14-year-old boy was killed in the area of New Castle Road. Elliott Hernandez was a student at Fultondale High School. Authorities said the teen was with his father in the basement of their home when a tree fell on the house. The father was also hurt. 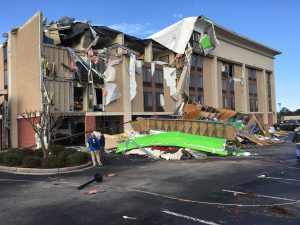 The Hampton Inn and Hurst Towing and Recovery also had major damage.

Jefferson County Commissioner Joe Knight said he was able to see some of the damage in the hardest-hit areas the morning after.

“It’s devastating but we’ve been here and we know what we have to do,” said Knight. “These people need help out here.”

Knight said some people will need shelter after their homes were destroyed.

“It’s very tough going and sitting on their front porch and the look on their face because some of them are still in shock,” Knight said. “We understand that.”

“The people of Fultondale took a hard hit last night — I’m grieved over the loss of life, injuries, homes & damaged businesses,” Ivey said. “I offer my prayers & deepest sympathies & pledge the full support & resources our state has to offer. I am with you, Fultondale!”

Several homes in Center Point were hit and donated items such as bottled water, tarps, canned goods, COVID-19 items and other items were being accepted at Center Point City Hall. Councilor DM Collins led the effort to collect and distribute supplies.

“We’re accepting items for donations,” said Collins. “We have a lot of citizens who had structural damage.”

Commissioner Knight also visited Center Point and unincorporated areas of east Jefferson County. One of the hardest hit areas was off of Pinson Valley Parkway, at Rusk Mobile Home Park. Although there were no injuries, many homes in the park were destroyed.

“I see a community coming together at a time of crisis,” said Knight. “This could be an example for all America.”

The community gathered under a large tent and helped neighbors clean throughout the day. Many trailers were damaged and several were destroyed in the neighborhood. The American Red Cross responded to the community and handed out tarps and food to those in need.

“There is complete devastation of the property but the most amazing thing is to see how this community pulls together,” said Cochran. “Just great people helping each other.”

Cochran contacted several local churches to try and find shelter 54 adults and 15 kids who had nowhere to go Tuesday night.

“These kids are all zoned to go to Pinson schools,” said Cochran. “Although they don’t live in Pinson incorporated, it doesn’t matter. They are part of our extended community and so anything people can do out there to try and gather the resources to help these people. If you look around, they are really taking care of themselves but there is going to be a financial burden here.”

The groundskeeper of the mobile home park lives in a mobile home that was cut in two by a fallen tree. His Daughter, Miranda Webster quickly came to see the damage and to help the community she grew up in.

“We’ve never been in this situation,” said Webster. “Some things are salvageable. Some personal items, clothes and his bed survived.”

Webster’s father was not inside the trailer when it was hit by the tornado. He was across the street in a brick building. He said shortly after the tornado came through, he realized how bad the damage was and instantly went to find people. There were several people trapped but were rescued and no injuries were reported.

In Clay, Old Springville Road, near Paradise Valley, was blocked by a downed tree and powerlines. Crews worked all day Tuesday to remove the tree. On Brewer Lane, at least two homes were damaged.

There was also damage in the Holly Springs subdivision. Power outages were reported and Alabama Power was notified. At least two homes on Brewer Lane had significant damage from fallen trees and high winds.

Power lines were also down over Center Point Parkway near the Jefferson County satellite Courthouse. Also in Center Point, Mayor Bobby Scott said quite a bit of damage was seen in the 500 block of Sunhill Road. The steeple off Hilldale Baptist Church was in the roadway after the storm.

Since Tuesday was trash day, Scott said many people had already put out trash cans when the apparent tornado hit. He said trash cans and trash were strewn around Sunhill Road.

Here is an aerial view of the storm damage in Fultondale. Let’s continue to keep our citizens who were affected by the storm in our thoughts and prayers. pic.twitter.com/OB5IM49I3Y