HOOVER — Authorities in Hoover are asking for the public’s assistance in locating a suspect in two felony cases of unlawful breaking/entering a vehicle and fraudulent use of credit/debit card.

The Hoover Police Department says the individual is wanted for questioning following two recent incidents at a Home Depot on Highway 280 and a Walmart in Pelham.

The first incident occurred on Jan. 22 in the 100 block of Inverness Plaza where the department says a purse was stolen out of a vehicle. Shortly after the break-in, the victim’s credit card was fraudulently used at Home Depot on Highway 280 to purchase merchandise.

Authorities say the second incident occurred in similar fashion on Jan. 28. This time, the suspect is believed to have broken into a vehicle in the 600 block of Municipal Drive where he stole a purse and quickly used the victim’s credit card at Walmart in Pelham and Sunoco on Highway 31. 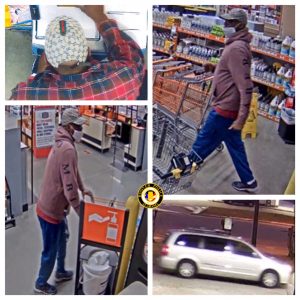 Images from the Hoover Police Department

HPD describes the suspect as a black male, standing about 6’5” with a Gucci ball cap. He is believed to be driving a light-colored minivan with an unknown tag number.

Anyone with information pertaining to the case is asked to contact Detective Ed Leach at 205-739-6071 or Crime Stoppers at 205-822-5300. Anonymous tips can also be left at the Hoover Police Department website.