LATEST NEWS
Home Sports No. 10 Alabama, No. 18 Missouri square off in SEC showdown 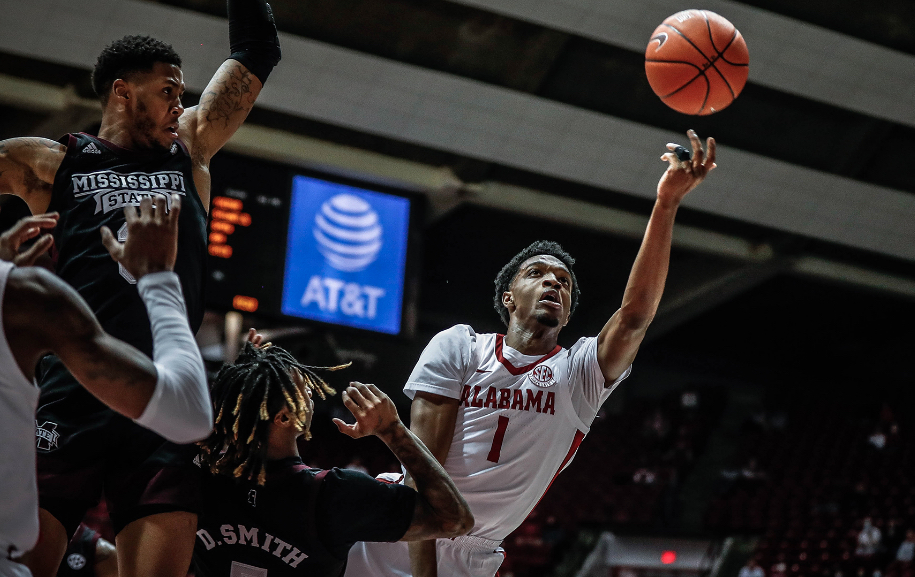 No. 10 Alabama, No. 18 Missouri square off in SEC showdown

A look at the first weekend of February around the Southeastern Conference:

GAME OF THE WEEKEND

No. 10 Alabama (15-4, 10-0) at No. 18 Missouri (12-3, 5-3). Saturday’s matinee matches the SEC’s top two teams and two of its four ranked squads. The Crimson Tide bounced back big from having its 10-game winning streak snapped by No. 24 Oklahoma State in the SEC/Big 12 Challenge, routing LSU 78-60 on Wednesday night. Alabama’s SEC record is the second-best start in school history, fueled partly by a high-scoring offense averaging nearly 80 points per game. The Tide have made 201 of 556 3-pointers, both of which rank in the top five nationally. Jaden Shackelford (13.8 points) and John Petty (13.1) have combined for 82 made 3s alone. Missouri held off Kentucky 75-70 Wednesday night for its best 15-game start since 13-2 in the 2013-14 season. The Tigers have also won five of six since a COVID-19 pause last month. Junior Xavier Pinson (15.1 points) leads four Tigers averaging in double figures and on offense putting up 75.2 points per contest.

Alabama’s journey to the SEC regular-ason championship will unfold on the road much of this month. Saturday’s game at Mizzou is the first of five away from home among the next seven in February before the Tide closes the season against Auburn on March 2.

Scotty Pippen Jr., G, Vanderbilt. The son of Naismith Memorial Hall of Famer Scottie Pippen has scored 55 points the past two games, including a career-high 32 against Florida on Jan. 27. This modest stretch is somewhat reminiscent of the sophomore’s hot start to the season, during which he scored at least 24 points in five of the Commodores’ first six games. Four consecutive 18-point efforts followed for Pippen, who’s critiqued by his dad and coach Jerry Stackhouse. The SEC’s No. 2 scorer is averaging a career-best 21.7 points, more than nine higher than his freshman season.

Florida forward Colin Castleton blocked seven shots in No. 22 Gators’ 72-66 loss Tuesday night against South Carolina, his fourth game in six with at least five rejections. He earned SEC Player of the Week honors behind 12-of-17 combined shooting from the field and 10 of 11 at the line in wins over Vandy and No. 11 West Virginia. … Tennessee’s 80-61 rout of Kansas in the Challenge included 8-of-13 shooting from long range (62%) and 16 of 17 from the line. … Kentucky shot 47% at Missouri (its third-best performance this season) and held the Tigers to 39%, but still lost its fifth of six SEC games since starting 3-0. … Alabama made 23 3-pointers against LSU on Jan. 19, breaking the SEC mark of 22 set by the Crimson Tide last season and tied this season by Auburn.

ON THE WOMEN’S SIDE

Two of the sport’s powerhouses clash again Monday night when No. 2 South Carolina visits No. 3 UConn. The Gamecocks finally beat the Huskies 70-52 last February for their first series win in nine tries and could return to Storrs, Connecticut, as the No. 1 team again when the rankings are released earlier in the day. … No. 18 Tennessee had showdowns at No. 24 Mississippi State on Thursday night and against second-place and No. 7 Texas A&M on Sunday postponed because of a combination of a positive test, contact tracing and quarantining within the Lady Vols’ program.