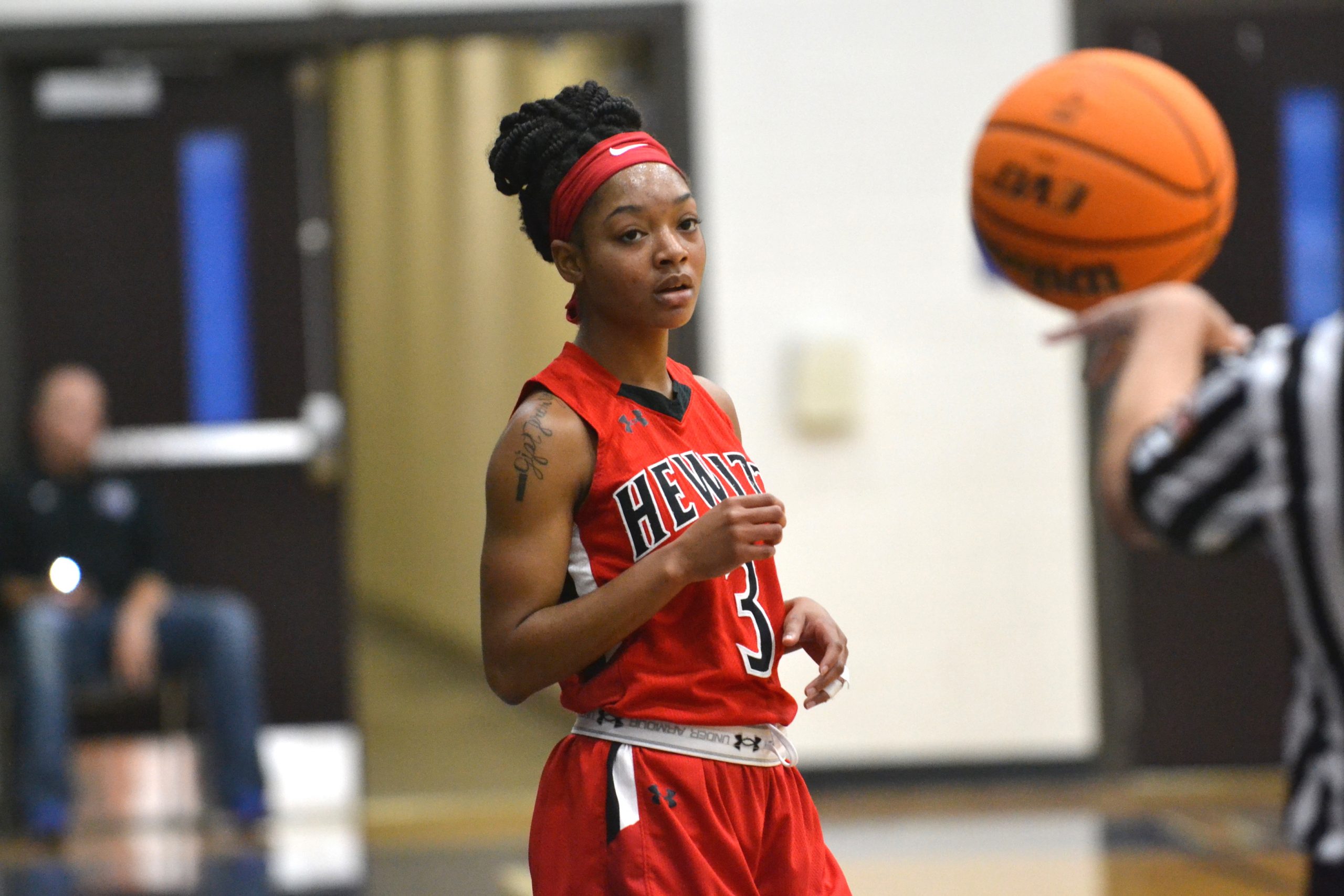 Hewitt-Trussville senior Londyn Johnson-Yates sets up for an inbound pass during a road game in 2020. Photo by Erik Harris

Eight local basketball teams have taken the floor in area championship games this week with two of them coming away on the winning side. See game-by-game recaps below.

The Lady Cougars were unable to protect a fourth-quarter lead on Thursday night in the Class 6A, Area 12 tournament championship game. Clay-Chalkville (13-7) started strong, but eventually fell for the third time to No. 6-ranked Mortimer Jordan, 34-31.

As the area runner-up, Clay will travel to No. 3 Hartselle next Monday in sub-regional play.

The third-ranked Huskies lost to No. 2 Vestavia Hills 66-60 on Friday night in the Class 7A, Area 6 championship game. Hewitt-Trussville qualified for the tournament finals thanks to a 44-42 victory over No. 5 Spain Park on Tuesday.

The girls will begin the playoffs with a trip to Area 7 champion and seventh-ranked Sparkman.

The Center Point girls suffered a 56-38 road loss to 1-seed Hayden on Friday night in the Class 5A, Area 12 championship game. The area 12 runner-up will travel to No. 3 Pleasant Grove in the first round of the playoffs next Monday while Hayden plays host to Wenonah.

Center Point secured its sub-regional berth with a 36-24 area semifinal win over Corner earlier this week.

Springville ran into a tough assignment in the Class 6A, Area 13 tournament finals on Friday, losing to No. 4 Oxford by a count of 69-41. The area champions were led offensively by Justin Moore with 23 points.

The Tigers now look to sub-regional play next Tuesday when they travel to Area 11 champion No. 3 Huffman.

With a 66-39 loss to Alexandria on Friday, the Moody boys have finished as the runner-up coming out of Class 5A, Area 11. The Valley Cubs rode a big outing from D’Anthony Walton, who finished with 31 points at home.

The Blue Devils are scheduled to open up the playoffs next Tuesday at the Area 10 champion, which will be decided between No. 1 Ramsay and No. 10 Parker.

Clay-Chalkville senior Isaiah Daniel sank the game-winning 3-pointer on Friday, as his sixth-ranked Cougars knocked off No. 7 Pinson Valley 53-50 in the Class 6A, Area 12 tournament championship game.

The seventh-ranked Eagles completed an undefeated league sweep on Saturday with a 55-52 victory over Hayden in the Class 5A, Area 12 tournament championship game. Center Point will now open the playoffs at home on Tuesday night when Area 9 runner-up Fairfield visits.