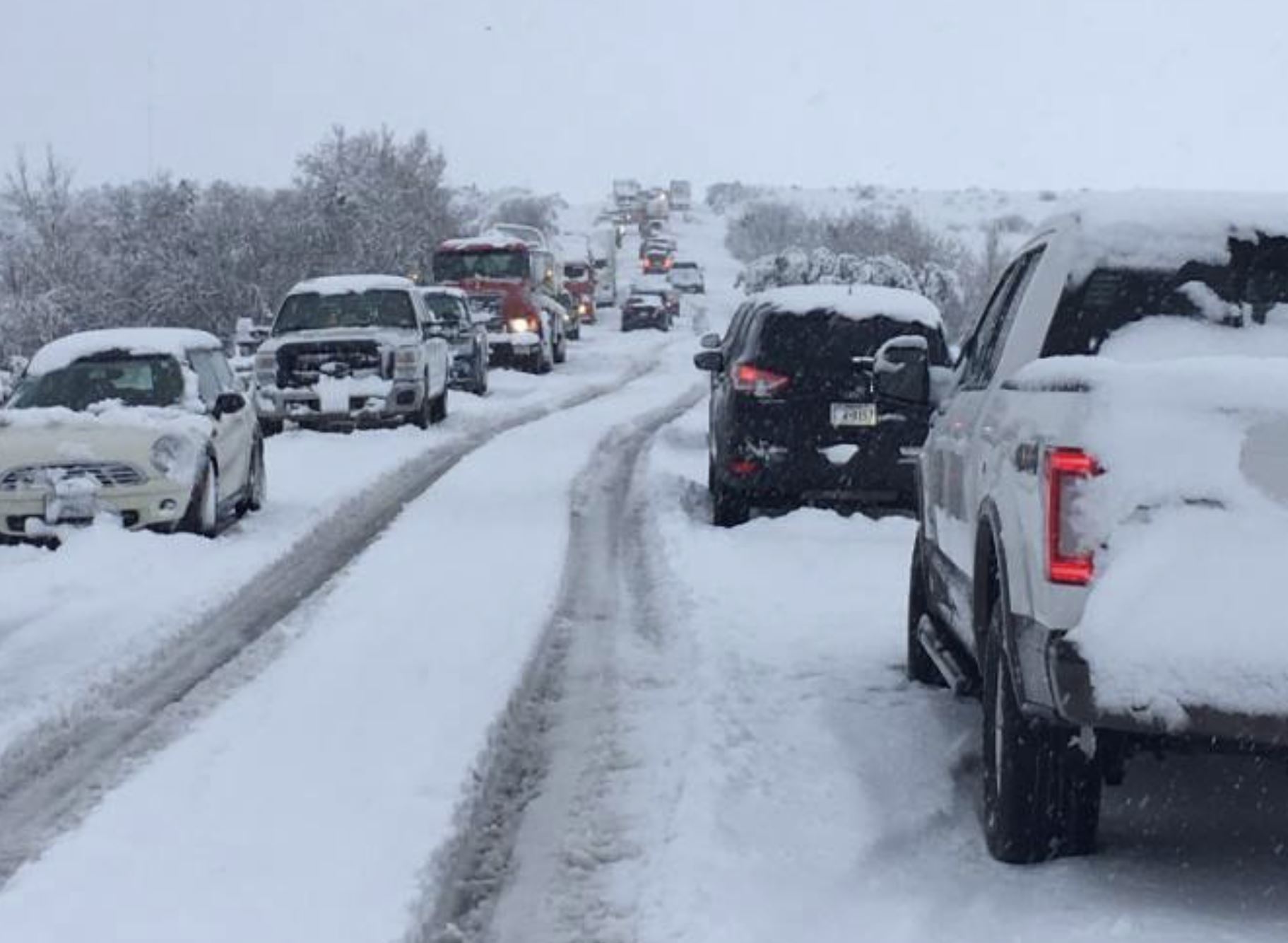 AUSTIN, Texas (AP) — A sprawling blast of winter weather across the U.S. is likely to blame for the deaths of two people in Texas, where an unusually snowy emergency Monday knocked out power for more than four million people, shut down grocery stores and air travel and closed schools ahead of frigid days still to come.

Law enforcement reported two men were found dead along Houston-area roadways. Causes of death were pending, but officials said the subfreezing temperatures were likely to blame.

The toll of the worsening conditions included the delivery of new COVID-19 vaccine shipments, which were expected to be delayed until at least midweek. Massive power outages across Houston included a facility storing 8,000 doses of Moderna vaccine, leaving health officials scrambling to find takers at the same time authorities were pleading for people to stay home.

Temperatures nosedived into the single-digits as far south as San Antonio, and homes that had already been without electricity for hours had no certainty about when the lights and heat would come back on, as the state’s overwhelmed power grid began imposing blackouts that are typically only seen in 100-degree Fahrenheit (38-degree Celsius) summers.

The storm was part of a massive system that brought snow, sleet and freezing rain to the southern Plains and was spreading across the Ohio Valley and to the Northeast. The Southwest Power Pool, a group of utilities across 14 states, called for rolling outages because the supply of reserve energy had been exhausted. Some utilities said they were starting blackouts, while others urged customers to reduce power usage.

“We’re living through a really historic event going on right now,” said Jason Furtado, a professor of meteorology at the University of Oklahoma, pointing to all of Texas under a winter storm warning and the extent of the freezing temperatures.

“This weather event, it’s really unprecedented. We all living here know that,” said Dan Woodfin, senior director of system operations at the Electric Reliability Council of Texas. He defended preparations made by grid operators and described the demand on the system as record-setting.

“This event was well beyond the design parameters for a typical, or even an extreme, Texas winter that you would normally plan for. And so that is really the result that we’re seeing,” Woodfin said.

More than 500 people were hunkering down at one shelter in Houston, but Mayor Sylvester Turner said other warming centers had to be shut down because those locations, too, lost power.

The largest grocery store chain in Texas, H-E-B, closed locations around Austin and San Antonio, cities that are unaccustomed to snow and have few resources to clear roads. The slow thaw and more frigid lows ahead was also taking a toll on Texas’ distribution of COVID-19 vaccines.

State health officials said Texas, which was due to receive more than 400,000 additional vaccine doses this week, now does not expect deliveries to occur until at least Wednesday.

The weather also put existing vaccine supply in jeopardy. Rice University on Monday abruptly began offering vaccines on its closed Houston campus after Harris Health System told the school it had about 1,000 vaccines that “were going to go to waste,” said Doug Miller, a university spokesman.

“The window was just a couple hours. They have to take care of it quickly,” Miller said.

Harris County officials said a facility storing the vaccines had lost power Monday and that a backup generator also failed. Hidalgo said she did not believe any vaccines were lost.

Caught without enough groceries on hand, Lauren Schneider, a 24-year-old lab technician, walked to a Dallas grocery store near her home Monday morning dressed in a coat, hat and face mask. Schneider said she didn’t feel comfortable driving with the roads covered in snow and ice. She said she hadn’t seen a serious snowfall in Dallas since her childhood.

“I really didn’t think it’s would be this serious,” Schneider said.

Teresa and Luke Fassetta, trundling through the snow carrying grocery bags, said the store lost power while they were shopping. The couple said they lost power overnight, then got it back around 9 a.m., and they were hoping it would still be on when they arrived home. If not, Teresa said, “we just have a bunch of blankets and candles and two cats to keep us warm.”

In Kansas, where wind chills dropped to as low as minus 30 degrees Fahrenheit (minus 34 degrees Celsius) in some areas, Gov. Laura Kelly declared a state of disaster.

Most government offices and schools were closed for Presidents Day, and authorities pleaded with residents to stay home. Louisiana State Police reported that it had investigated nearly 75 weather-related crashes caused by a mixture of snow, sleet and freezing rain in the past 24 hours.

“We already have some accidents on our roadways,” Kentucky Gov. Andy Beshear said during a morning news conference. “It is slick and it is dangerous.”

Air travel was also affected. By midmorning, 3,000 flights had been canceled across the country, about 1,600 of them at Dallas/Fort Worth International and Bush Intercontinental airports in Texas. At DFW, the temperature was 4 degrees Fahrenheit (-15 degrees Celsius) — 3 degrees (-16 degrees) colder than Moscow.

The storm arrived over a three-day holiday weekend that has seen the most U.S. air travel since the period around New Year’s. More than 1 million people went through airport security checkpoints on Thursday and Friday. However, that was still less than half the traffic of a year ago, before the pandemic hit with full force.

The southern Plains had been gearing up for the winter weather for the better part of the weekend. Texas Gov. Greg Abbott issued a disaster declaration for all of the state’s 254 counties. Abbott, Oklahoma Gov. Kevin Stitt and Arkansas Gov. Asa Hutchinson each activated National Guard units to assist state agencies with tasks including rescuing stranded drivers.

President Joe Biden also declared an emergency in Texas in a statement Sunday night. The declaration is intended to add federal aid to state and local response efforts.