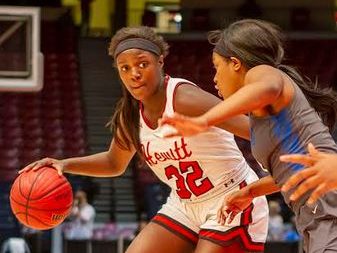 SWEET 16: Hewitt storms back at Sparkman to advance

HARVEST — The Hewitt-Trussville girls basketball team is headed to the Elite 8 in Jacksonville.

With a 49-42 road win over No. 7 Sparkman on Friday night, the third-ranked Huskies (27-4) have forced a rematch with Area 6 foe and second-ranked Vestavia Hills next week in the Northeast Regional finals. That contest will be played at Jacksonville State University.

Freshman point guard Jordan Hunter secured 10 rebounds to go with five points, three assists and three steals on the road, as her girls overcame a slow start to save the season. Sparkman stormed out to an 18-4 advantage at the end of the first quarter, but Hewitt worked the deficit down to 20-17 at the half and later carried a 39-28 lead into the final period.

Hewitt-Trussville will have to break an 0-for-3 skid against the Rebels next Wednesday. Vestavia beat the Huskies 66-60 in the Class 7A, Area 6 tournament championship game last week after winning both regular season meetings.

Can Hewitt turn the tide when it really counts? Time will tell.