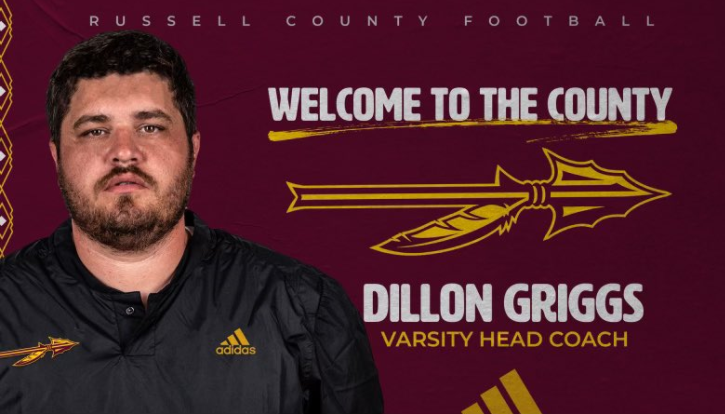 The Russell County School Board on Tuesday approved the hiring of Griggs as the next head football coach at Russell County High School. He will replace Mark Rose, who retired last December following an 0-9 season that included four forfeits.

The Warriors compete in Class 6A, Region 2 alongside Opelika, Eufaula, Park Crossing and others.

“Excited to be a part of the (Russell County) program,” wrote Griggs on Twitter. “Can’t wait to get started #RiseUp #NewEra.”

Griggs was brought on to join Pinson Valley head coach Sam Shade’s staff in April of 2020. In his one year calling plays, the Indians scored nearly 30 points per game en route to the Class 6A state championship. Pinson Valley (12-2) wrapped up the season with a 23-13 victory over Spanish Fort in Tuscaloosa.

Prior to his time at PVHS, Griggs served as offensive coordinator at Jackson High School.

“… I have gotten to be a part of a program, school and community that has been nothing short of a blessing,” wrote Griggs in a statement. “From day one the boys bought in, and with our backs against the wall we stood tall and went the distance. I’m so grateful for each and every one of you. You changed my life forever and I only hope all of you got as much from me as I got from all of you.”