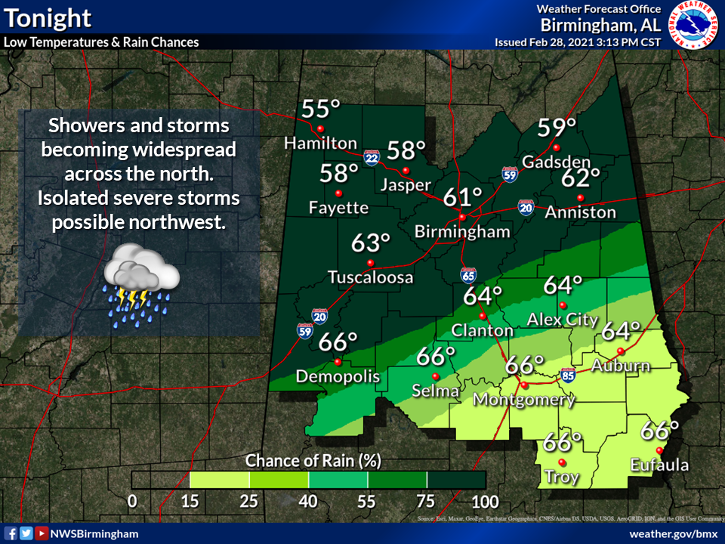 BIRMINGHAM — The National Weather Service (NWS) in Birmingham confirmed record-breaking temperatures in Birmingham on Sunday, Feb. 28, 2021, and there could be some hazardous conditions in northwest central Alabama late Sunday into early Monday morning.

The temperature in Birmingham reached 82 degrees Sunday, breaking the record of 81, which was set in 2011. 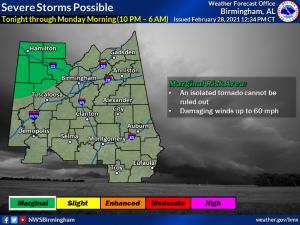 Isolated, severe storms are possible in northwest counties in central Alabama, from around 10 p.m. until Sunday through 6 a.m. Monday. A brief tornado and damaging winds of up to 60 mph are possible. There is a marginal risk for Pickens, Tuscaloosa and Walker Counties.

Another concern is flooding and heavy rains along and ahead of a cold front. Far northwest counties could see minor flooding. Anyone traveling overnight is urged to use caution. The flood threat will move southeast overnight.

Rainfall amounts could be up to 1.60 to 1.80 inches in a few spots, which is abnormally high for this time of year, according to the NWS. Flash flooding could be an issue even along the Interstate 20 corridor as we move into the early morning hours on Monday. 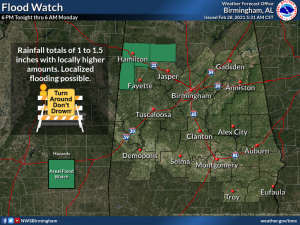 A Flood Watch has been issued for Marion, Lamar and Winston Counties.

Thunderstorms will be capable of producing a few severe storms and torrential downpours. The system will bring with it cooler temps that will continue to drop through the day Monday.