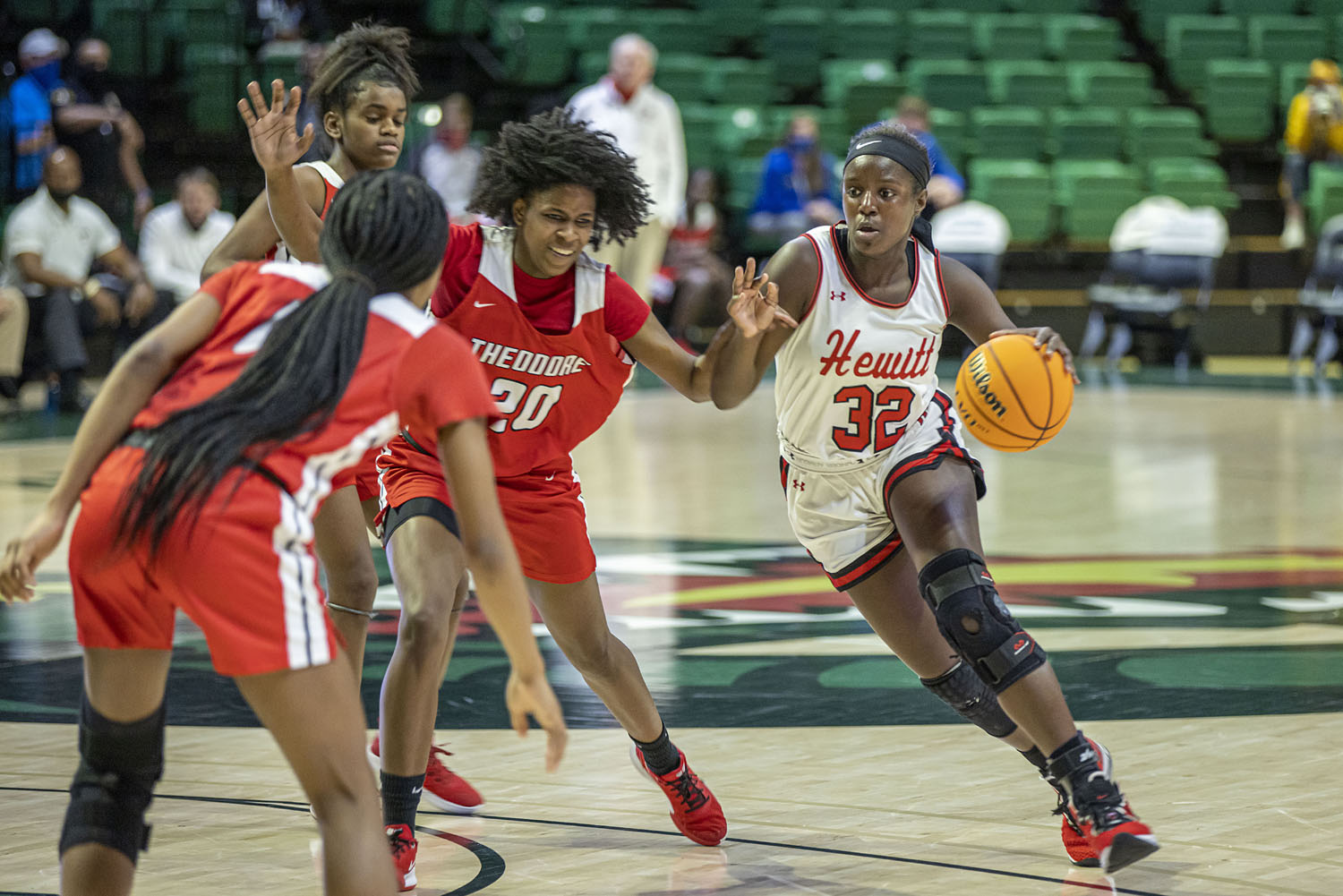 Hewitt-Trussville senior Amiya Payne (32) drives inside during a win over Theodore. Photo by Ron Burkett

It will be the school’s second Class 7A finals appearance in three years, as the Huskies (29-4) will battle Hoover in a rematch of the 2019 state championship game.

To get there, No. 3 Hewitt overcame tenth-ranked Theodore 73-39 on Tuesday in the state semifinals at Bartow Arena in Birmingham. The top-ranked Bucs opened up Tuesday’s session with a 55-36 semifinals victory over No. 6 Auburn.

Six days after sinking the game-winner against Vestavia Hills in the Northeast Regional finals, senior standout Amiya Payne, once again, spurred the Huskies attack to the tune of 25 points and seven rebounds in 28 minutes played Tuesday afternoon.

Payne and the Huskies jumped out to a fast start at UAB, knocking down seven treys in the first half to lasso a 36-14 advantage at intermission. Payne provided three of those makes and sophomore Audreonia Benson came off the bench to sink three first-half triples of her own. She would later finish with 12 points off a 3-for-6 effort from beyond the arc. 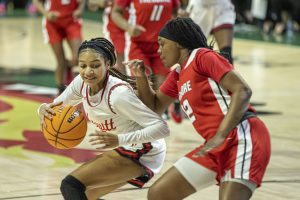 With shots falling from the outside, driving lanes began to open up in the third quarter. Hewitt-Trussville point guard Jordan Hunter took advantage with a pair of inside makes that put her girls out front 42-18 with 5:45 remaining in the third. Sophomore guard April Hooks finished off the third with her second 3-point field goal, which was followed by a 3-for-3 effort at the charity stripe with less than a second remaining in the quarter.

The Huskies went into the final period continuing to dominate the Bobcats, 53-29.

Several Hewitt-Trussville bench players checked in for the final minutes of the fourth. The celebration had begun.

Hooks and Hunter each finished with 11 points for the Huskies. Londyn Johnson-Yates came through with five points and Amir Brown added four points in the semifinal win.

Hewitt-Trussville also executed on the defensive end by forcing 24 Theodore turnovers that led to 28 HTHS points. The Huskies also poured in 17 second-chance points to aid the runaway win.

The Theodore Bobcats have plenty to be proud of. This was the team’s first Final 4 appearance in school history.

Hewitt-Trussville began its playoff run with a 49-42 road win over Sparkman and followed with a 48-46 victory over Vestavia Hills in the Elite 8 last week.

Hewitt Coach Tonya Hunter remembers how it feels to win big. In 2014, her team at Shades Valley took home the 6A title. She said her teammates and her championship ring have been serving as inspiration for her players.

“Some of my players from our championship team at Shades Valley came by and visited with my players a few weeks ago,” said Hunter. “Amiya has been hanging on to the ring for a few weeks.”

The championship game will be played at UAB’s Bartow Arena Wednesday at 2 p.m. The Lady Huskies will take on the Lady Bucs for the second time this year, after facing them during the regular season. The nail-biting regular-season game won by Hoover, 60-58, is a precursor to what is expected to be an all-out battle for the top spot.

All semifinal and championship games are being live-streamed over the NFHS Network by AHSAA TV partner WOTM TV.