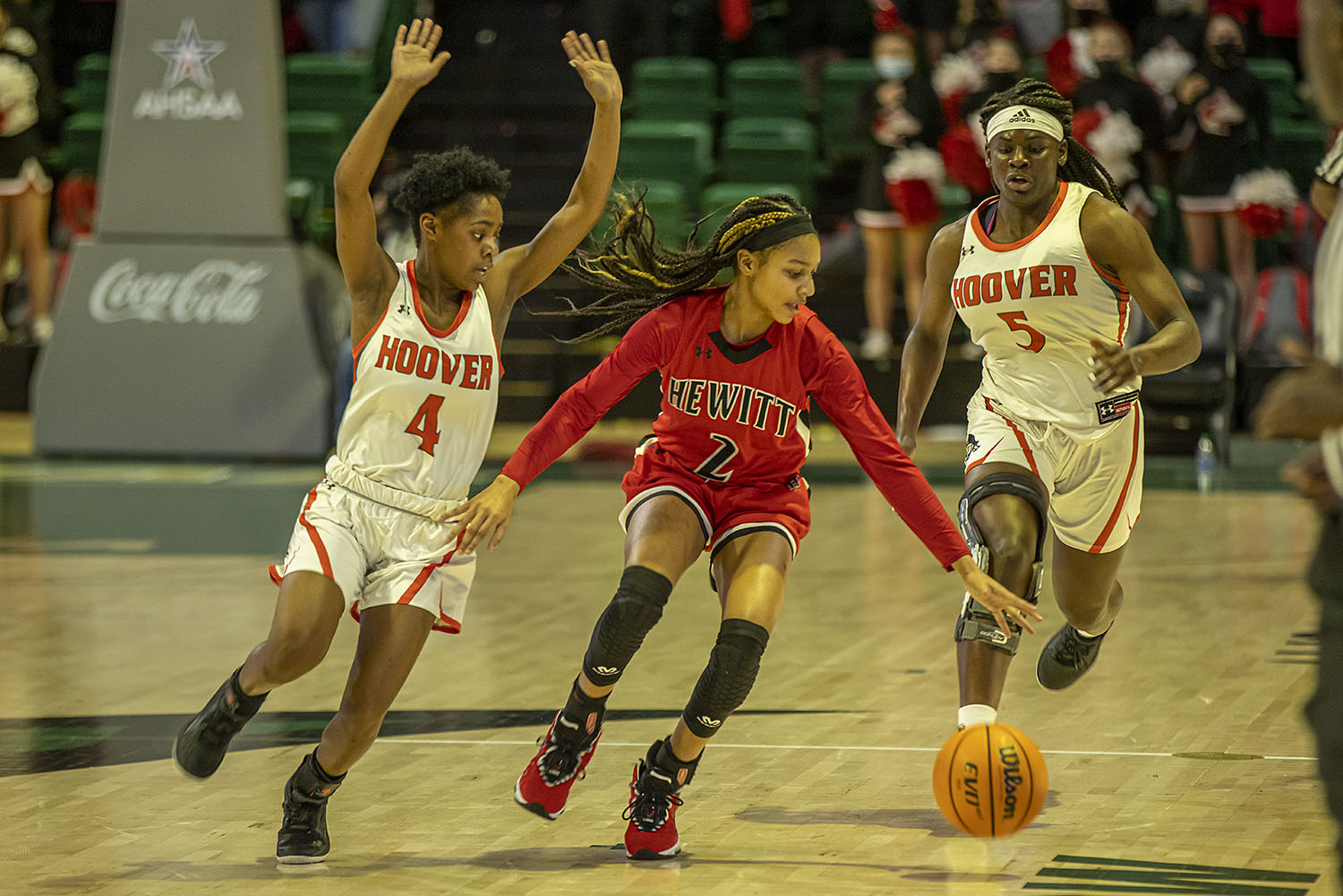 Hewitt-Trussville point guard Jordan Hunter (2) gets out in transition during the 2021 state championship game in Birmingham. Photo by Ron Burkett

In a rematch of the 2019 finals, the third-ranked Huskies fell to No. 1 Hoover 61-37 in the 2021 state championship game from Bartow Arena in Birmingham. The Bucs started strong and later pulled away in the second half for a comfortable win to secure their sixth state crown in the last 12 years.

Following a tight first half, Hoover imposed its will during the final 16 minutes, outpacing Hewitt-Trussville 30-14 during that time.

State tournament MVP Reniya Kelly led the surge and finished with a game-high 24 points to go with eight boards. The guard played a physical game, which put her on the free-throw line often. She would capitalize with a 10-for-11 showing at the stripe.

Bucs point guard Jada Knight chipped in with 13 points to go with 11 more from Kristen McMillan. 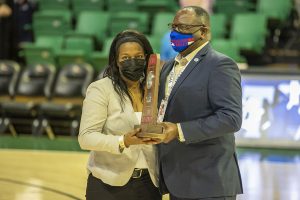 Coming off a 25-point performance against No. 10 Theodore in the state semifinal round Tuesday and another 17 points last week against No. 2 Vestavia Hills, all-state senior Amiya Payne closed out her Hewitt career with 18 points and eight rebounds on Wednesday afternoon.

She drew double- and sometimes triple-teams for much of the game, but still managed to sink nine shots, including three from beyond the arc. It just wasn’t enough to keep pace with Hoover.

“I knew that they would face guard me the entire time, so I knew that my job would be to help my teammates,” said Payne, a Middle Tennessee State signee.

The Bucs opened the contest on a 10-2 run thanks to multiple second-chance opportunities. However, Hewitt would answer with a 10-0 run of their own, shouldered by back-to-back triples from Payne and Audreonia Benson, followed by a deep 2 from Payne.

The Bucs went to the second period with a 14-12 advantage.

Hoover stretched its lead with a 17-11 advantage in the second quarter, going to the locker room up 31-23.

It would be all Orange throughout the final two frames, as the Huskies shot 5-of-19 from the field and 1-of-4 from the free-throw line.

Hewitt-Trussville’s playoff run includes a 49-42 road win over No. 7 Sparkman in the first round, a 48-46 victory over second-ranked Vestavia Hills in the Elite 8, a 73-39 win over No. 10 Theodore in the Final 4 and a 61-37 loss to top-ranked Hoover in the state championship game.

“We came in feeling really good,” said Hewitt-Trussville head coach Tonya Hunter. “With the short turnaround (semifinals yesterday) the coaching staff stayed up as late as we could. I’m just so proud of the courage from these girls to come out during this pandemic, in this state and play on this stage. This is not our failure. We view failure differently than anyone else. This was a success.”