LATEST NEWS
Home Metro/State/Nation Down 15, No. 6 Alabama rallies past Tennessee in SEC semis 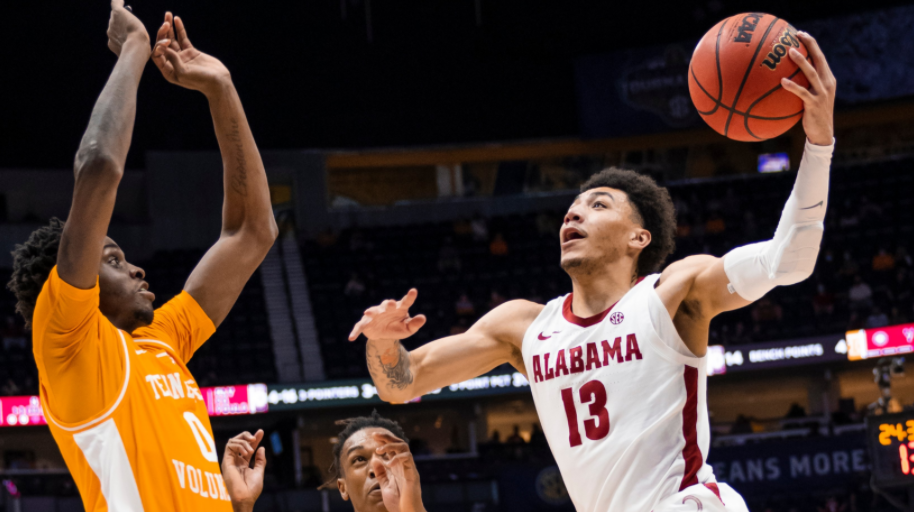 Alabama guard Jahvon Quinerly (13) drives to the hoop during the SEC Tournament semifinals. The Tide will meet Colorado state on December 21, 2021 in the C.M. Newton Classic in Birmingham. (File photo)

Down 15, No. 6 Alabama rallies past Tennessee in SEC semis

NASHVILLE, Tenn. (AP) — Herbert Jones had 21 points and No. 6 Alabama rallied from a 15-point deficit in the second half to beat Tennessee 73-68 Saturday in the Southeastern Conference Tournament semifinals.

Top-seeded Alabama (23-6) faces the LSU-Arkansas winner in Sunday’s championship in search of its first SEC Tournament title since 1991.

Trailing 48-33 with 16:56 remaining, the Crimson Tide stormed back to lead 60-59 with 5:26 left, their first edge since the opening basket. They went ahead with just over four minutes left as Jones whipped a pass out to behind the arc to wide-open Keon Ellis for a tiebreaking 3-pointer to put Alabama up for good.

Jones made one of two free throws with 3:24 to make it a two-possession game before later feeding Quinerly in the lane for a layup and a 69-65 lead. Yves Pons’ 3-pointer got Tennessee within 69-68 with 41.4 seconds left, but Quinerly added two free throws and Ellis two more with 3.7 seconds left to seal a tense game.

Jones also had 13 rebounds and four assists for the Tide, who won despite shooting 37%. But they held the Volunteers to 35% shooting after halftime and made key 3s despite a shaky start. Quinerly was 8 of 13 shooting off the bench.

Keon Johnson had 20 points and Jaden Springer 18 for Tennessee, which sought to make its third consecutive SEC final.

The game began with key players from teams sidelined by injuries.

Tennessee played without forward John Fulkerson, who sustained a concussion and facial injuries after taking two elbows from Florida’s Omar Payne in Friday’s quarterfinal victory. Alabama missed freshman guard Josh Primo, who was on crutches with his left knee in a brace after being injured in the second half against Mississippi State.

Tennessee: Fulkerson’s absence left the Volunteers without a big rebounder, but teammates picked up the slack by grabbing Alabama’s misses from long range and scoring in transition. Johnson’s hot hand early helped but the Vols faltered down the stretch.

Alabama: The Crimson Tide have thrived from long distance all season and weren’t about to change, even without Primo. It didn’t start well but ended better as Ellis hit a big 3 to help the Tide finish 7 of 28.