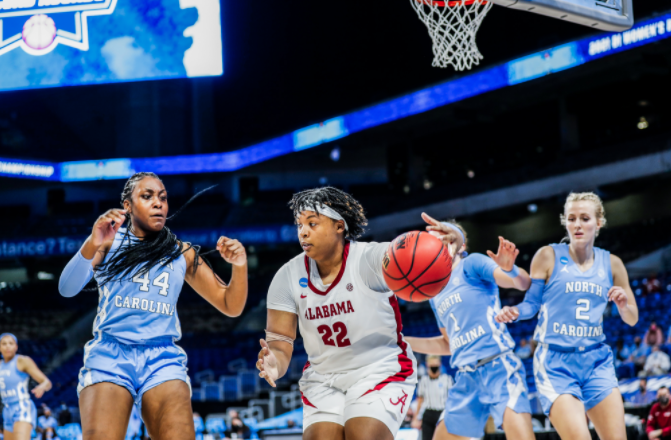 SAN ANTONIO (AP) — Jordan Lewis had a career-high 32 points, 11 rebounds and eight assists to help seventh-seeded Alabama beat No. 10 seed North Carolina 80-71 on Monday in the first round of the women’s NCAA Tournament.

“The world saw today why Jordan Lewis is the best point guard in the SEC,” Alabama coach Kristy Curry said. “She shares and cares and finds ways to impact us in so many different categories.”

“When I came to Alabama I told coach we’d get back on the big stage,” Lewis said. “When you get a moment like this, you can’t miss an opportunity. … Don’t miss a chance to be great. Today we couldn’t miss the opportunity.”

Alabama built a 29-19 lead midway through the second quarter behind Lewis before the Tar Heels (13-11) cut it to 31-29 with 3:09 left before the half. The Crimson Tide responded scoring 10 of the next 12 points to take a 41-31 lead at the break. Lewis had five points during the closing burst and finished the first half with 18.

“Jordan Lewis was a woman amongst children at times,” North Carolina coach Courtney Banghart said. “They really affected us getting into the paint with the dribble.”

North Carolina trailed by 10 going into the fourth quarter before cutting it to 65-60 on a 3-pointer by Stephanie Watts with 6:46 left. Ariyah Copeland had a three-point play on the other end to start a 11-2 run and put the game away.

“It’s March, nothing’s easy. I give credit to Alabama for being able to convert on our lack of on-ball presence,” Watt said. “I’m going to do whatever I can to win this ballgame. Obviously, we came up short, but my mentality was I’m just going to leave it all out there. This is my last game in a Carolina uniform.”

Lewis finished short of the school record of 33 points in NCAA tournament play set by Yolanda Watkins against Duke in 1995 in a quadruple-overtime game.

Alabama came into the game knowing it had to hold its own on the boards against North Carolina, which was 10th nationally in rebounds per game. The Crimson Tide did more than just hold its own with a 46-33 advantage in rebounds.

“We come from a league where rebounding is critical,” Curry said. “Kids have been playing against long, athletic and big all year long. I thought our kids pursued the ball.”

Banghart has a lot to look forward to with the freshmen class accounting for nearly 44% of the points and 50% of the assists this season while playing half the minutes.

Curry has now taken three different teams to the NCAAs after leading Purdue (2000-06) and Texas Tech (2011, 13) into the tournament

Alabama faces the winner of the Maryland-Mount St. Mary’s game on Wednesday in the second round.