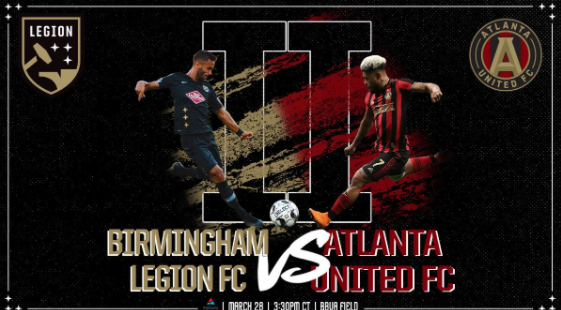 BIRMINGHAM — Big-time soccer is coming to the Magic City this weekend.

Legion FC will kick off its third season with a preseason exhibition in Birmingham versus MLS powerhouse Atlanta United FC on Sunday, March 28, at 3:30 p.m.

“We are excited to have Atlanta United back in Birmingham,” said Legion FC President and General Manager Jay Heaps. “Atlanta continues to be a premier club, not only in Major League Soccer, but also in the world game, and it is an honor to host them as they prepare for the CONCACAF Champions League competition and their upcoming MLS season.”

Due to limited capacity in the stadium, Legion FC season ticket holders will be the only fans guaranteed seats, and they will also have priority for purchasing additional tickets closer to the event. Fans still have the opportunity to become a new season ticket holder now by contacting the Legion FC Ticket Office or heading to the 2021 Season Tickets page.

Season ticket packages include every USLC home game as well as any other friendly matches not yet announced.

Legion FC’s third season in the USL Championship will officially begin on or around May 1 with the schedule set to be announced later this month. Health and Safety Protocols that were fully vetted and implemented at BBVA Field last season have been updated and will be in place to begin this season, and all Health and Safety Protocol information can be found on the Return to Play page at bhmlegion.com.