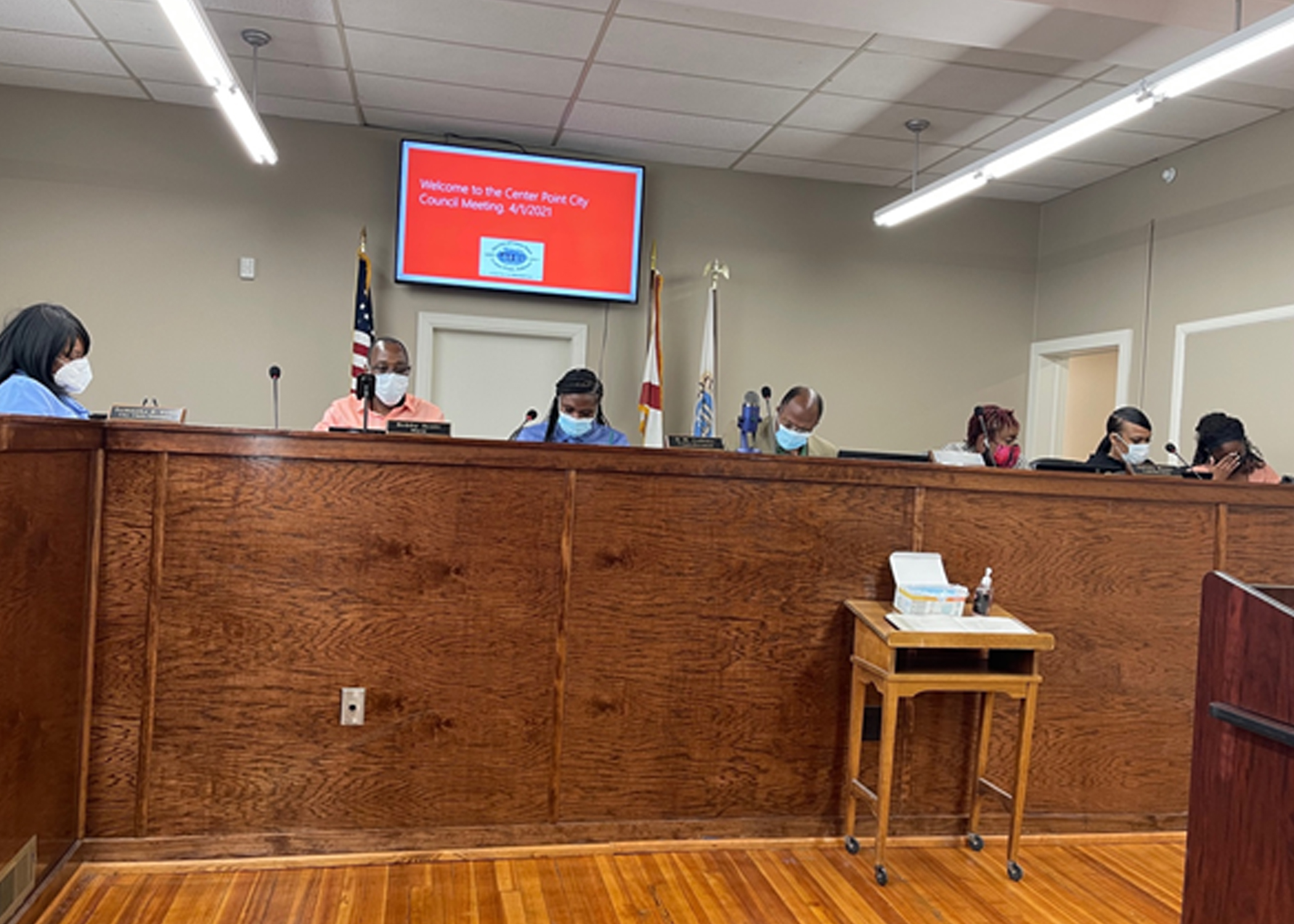 CENTER POINT — The Center Point City Council met at City Hall on Thursday, April 1, 2021, after weeks of going virtual due to the increased coronavirus numbers.  The city council meeting was open to the public and recorded live for residents who wanted to stay home.

The meeting started with a consent agenda which lead to an approved contract extension with the City Attorney Julian Hendrix and an approved resolution for a modified property inspection form.

The consent agenda was approved unanimously.

“Having a new modified property inspection form helps us standardize our operating procedures and helps us keep track and have paper trails of what homeowners need to have fixed and when they reschedule,” said Mayor Bobby Scott. “It’s no question about things been missed if anything is being missed at all.”

During the meeting, some residents spoke up during a public hearing.

Community resident Elton Skipper addressed issues within his own neighborhood.

“Down from my house, there is a pothole that been there almost two or three months and I just want to see if something could be done about filling up the pothole,” said Skipped. “Also, down the street, there are like five or six potholes, I mean, it’s just bump, bump, bump.”

Skipper has been a resident of Center point for over 20 years and just wants to see a change.

Council President, D.M.  Collins told Skipper she would look into getting his community issues resolved and she will work simultaneously with Jefferson County Public Safety.

Along with Skipper, Secretary of Center Point’s Civitan club, Ms. Ray Cope and Fire Chief Gene Coleman spoke out about their involvement in Center Point community.

As the meeting continued, the city council approved Council President D.M. Collins as an alternate to vote at the Annual Business Meeting of the League of Municipalities just in case Mayor Bobby Scott is unable to cast a vote on Friday, May 14.

Councilwoman Ebonee Copeland will be the second alternate candidate if Council President D.M. Collins is unable.

The council went on to approve a proposal for $7,500 for LRY marketing to help the city revamp its image and online presence to keep the community alert, aware and educated about what’s happening in the city.

$5,000 will be spent for 40 hours of work toward strategy development and $2,500 will be spent towards media prep. LRY will train the city for 20 hours on how to handle media requests.

Councilor Tiffany Moore said the idea to hire LRY came up after discussions about informing the public about positive things happening in Center Point.

“We want to highlight the good things that are happening in the city,” said Moore. “I think the negative things are a small percentage of the things that go on in this city.”

In addition to the LRY proposal, the city council launched its official website, CityofCenterpoint.org, where residents can voice concerns directly and know what’s going on in the city instead of going elsewhere.

“The new website has a citizens request tab button on our page and this allows you all to submit any type of concerns instead of going to Facebook and tagging councilors and it allows you to route it to the correct department and the appropriate person,” said Collins.

The public is also able to access council meeting agendas and get alerts to their phone about certain things like weather, meeting notifications or special events when they sign up.

Mayor Scott believes the website will make a great impact on the community and he feels the biggest issue between the public and the council was a lack of communication and now with this new form of communication he is hopeful for substantial change.

For council and mayor reports, Council President Collins is still accepting applications for the Economic Development program and she is calling out all business owners to get their 2021 business licenses.

Councilwoman Sharon Jones is seeking to help high school students with readiness assist by helping them get internships and applying to become a firefighter or a nurse with the Jefferson County Personel Board.