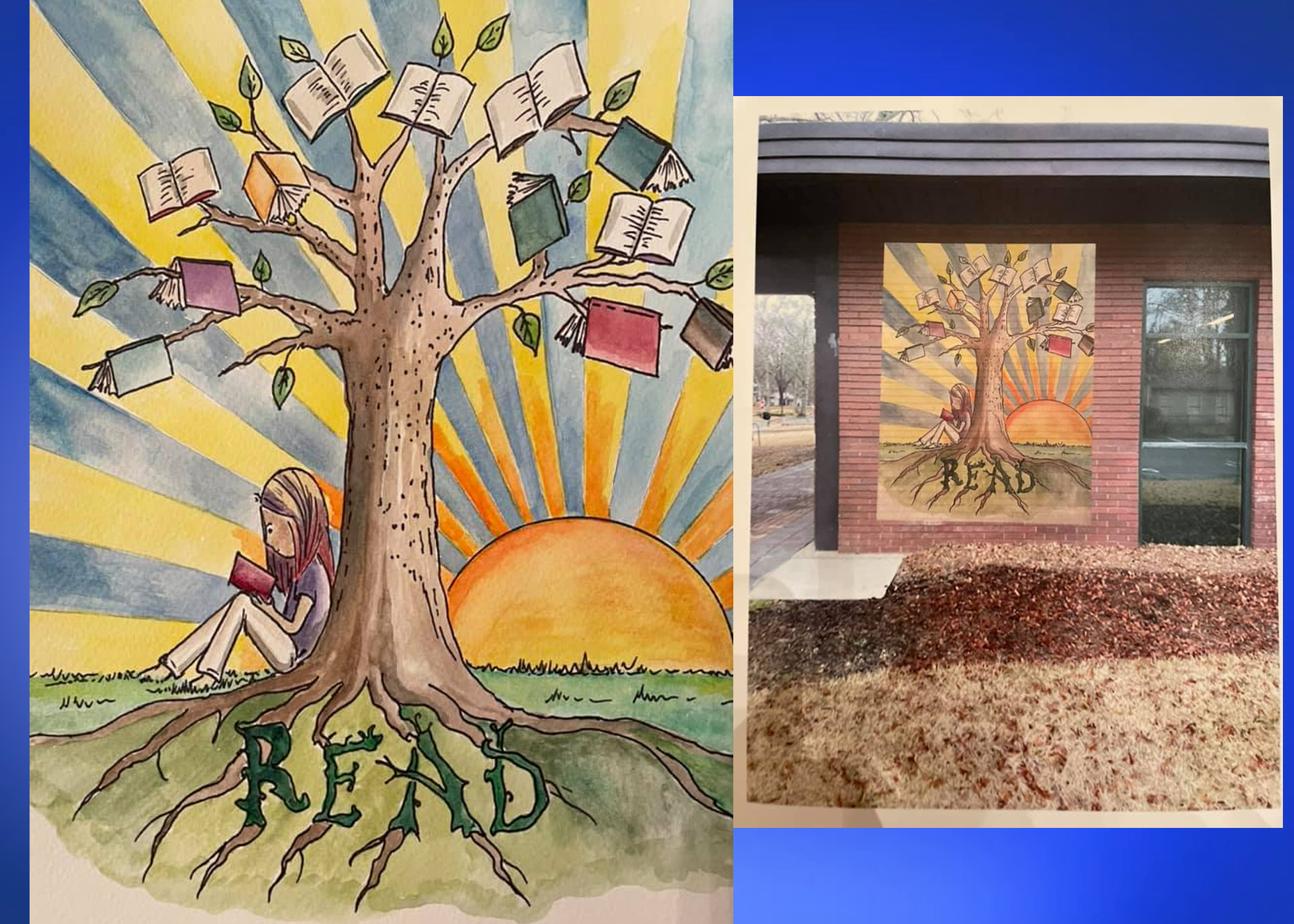 Renderings of the mural for the Trussville Public Library. The mural will be about 12’ high and 8’ wide. Photo: Gray Car Murals Facebook Page.

TRUSSVILLE — There is a new effort to bring color into Trussville. Gray Car Murals, a non-profit 501(c)(3), was established with the goal of installing murals throughout the city.

Marc Ward, his wife, Callie, and his mother, Marcia, are passionate about their cause.

The hope is to design murals that will be inspiring and fun. The idea came to the Wards via social media.

“During the pandemic, we saw a Facebook post from the Onetona Business Association,” said Ward. “We saw there were a bunch of murals so we got out and drove around there and saw the murals. We thought, ‘Why can’t we do that here?’ So, that’s what kickstarted the idea.”

The name of Gray Car Murals came from the names of the Ward children, Grace (Gray) and Carter (Car).

The first project for Gray Car Murals is at the Trussville Public Library. A mural designed by Callie Ward, who is also the art teacher at Magnolia Elementary, is a scene showing a woman enjoying reading under a “book tree.”

“My wife is an avid reader and in that school, they promote reading a lot,” Ward explained. “She thought it would be nice to inspire children to read. That’s what we want. We want people to go and check out some library books and have their picture made by the mural to promote not only reading but also to promote the library itself.”

The Friends of the Library and the Library Board were a big part of raising the money for the library mural, according to Ward.

Sam Filippo, with Skidmore Signs out of Clay, will install the mural at the library.

“He does murals all over the country, so he’s been instrumental all along on how it should work,” Ward added.

Weather permitting, the hand-painted image should be complete by the end of April.

Ward said he is in the process of reaching out to building owners in downtown Trussville so that his vision can benefit the city even more.

“We would like to do the downtown area,” he said. “We have one building owner that has approached us so far wanting one in the entertainment area.”

Ward said having a mural on a building can be beneficial for business owners in the city by attracting people from all over.

“Eventually, I want to have enough murals downtown where people come, have their picture made, share on social media and do what I can an art trail,”  Ward said. “They will stop and stay in Trussville. For every dollar that we invest in the community, we get six dollars back from people coming in and eat, hang out and spend some money. They may even move here one day.”

The murals will not be advertisements or store signs, but rather a depiction celebrating Trussville’s culture.

“We would work with the building owner and the design would be non-political,” Ward said. “It would be Trussville-based and historic-based and a professional actually does the work.”

Ward said he would like to see volunteers help clean walls and prep them for the paint. He would also like to see items donated such as ladders, paint brushes, paint and other materials that would help make the project successful.

Money donated goes to pay the designer and installer of the signs. You can donate with a check made payable to Gray Car Murals. Send the check to 6515 Spring Street, Trussville, AL 35173. Ward is also working on a way for people to donate electronically.