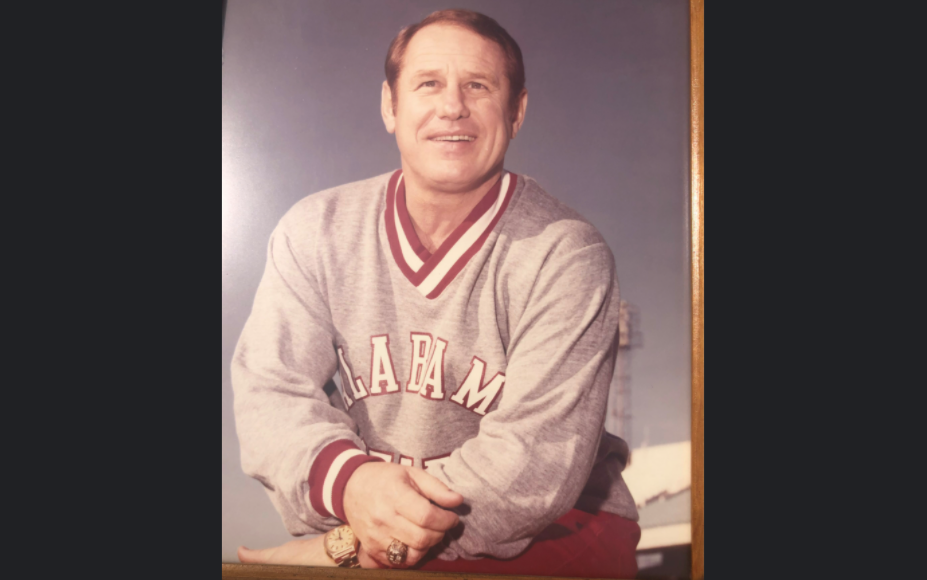 George O. “Shorty” White, 90, died on April 5th, 2021, after a short period in a Homewood Nursing home. He was born in Birmingham, Alabama February 4, 1931 to Ruth Limbaugh White and George O. White Sr. He parents divorced after a few years and his mother remarried Lewis Payton Sidle in 1940. He soon became the older step–brother of James “Jimmy” Corbin Sidle. George remembers going to games with his step-father Lewis at Legion Field and watching the big schools in the city, Woodlawn, Ensley, Phillips, Ramsay and West End, the big 5 as they were called. This is where he fell in love with the game of football.

In 1942 when George was eleven and his brother Jimmy was two, Lewis Sidle went off to war being stationed first in San Francisco, then Hawaii and Guam where he died in 1945. Lewis was a Navy Seabee in World War II and his job was to drop dynamite in the bay to create depth for the carriers to be able to dock in the bay. Someone in their group became careless and an explosion killed him. Jimmy was not old enough to remember his father. One of the last things that his step–father Lewis told George before going to war was, “You’re the man of the house now, take care of your mother and brother”. Shorty, the name his friends used, ended up being the father figure for Jimmy for many years.

George attended Phillips High School from 1947-1950. His High School football Coach, Jimmy Tarrant, said he had “more guts than Jesse James.” George was an outstanding Football player and lead his team to a victory in the 1950 Clinic game against Woodlawn 20-0 where 38,000 fans attended. The Clinic game was the largest High School attendance until the Banks High vs Woodlawn game in 1974 broke the record with 42,000.

After High School, Shorty received a Scholarship from Auburn University. He had limited time on the field and was drafted in the army his Junior year. While in the Army he became a skilled boxer. He remembers his mother, Ruth, coming to watch him box at the base and she brought him a new watch. Little did he know, it would be the last time he saw her alive. She died in an automobile accident two days later on his birthday. This left his brother Jimmy an orphan. While being in the army, George would say later that the training and discipline he experienced there, is what he would use later in coaching football. As he was being discharged in 1955, he learned his birth father had died in a fire. He soon enrolled at Jacksonville State after he discovered he had two years left of eligibility. While in college he met his future wife June Melton who was enrolled at Birmingham Southern. George learned that June said she was not going to marry anyone without a college degree. He got the message and graduated from Jacksonville State. George and June were married August 25, 1956. In their early years of marriage, they would bring George’s brother Jimmy as a part of their family.

George “Shorty” White’s first coaching job was at Sylacauga High School under Tom Calvin. Shorty spent two years at Sylacauga before moving to a new High School in the Birmingham area, Banks. Little did he know that this decision would lead him to become one of the most successful and lasting legacies in Alabama High School sports history. After two years as an assistant, Coach Shorty White became the head football coach for Banks High School.

Three State football Championship, 88 players signing D1 Football Scholarships, and a winning record from 1961-1974 of 100-37-5, gave Coach George Shorty White the success and notoriety that Alabama’s Bear Bryant needed to add him to his staff in 1975. George coached for six seasons at Alabama as the running backs coach. The University won two national championships and even more SEC championships during his time on staff.

George was a member of Pelham Baptist Church and testified that he became a believer in Christ in the early 1970’s through a crusade given by Wales Goebel for the Banks Football Team. After leaving Alabama, George spent a few years in the private sector before coaching at two other High Schools.

George “Shorty” White is remembered as a strong disciplinarian and a fun–loving person. He had a Christian attitude toward helping others. Countless players have given account of things he did for them that turned their lives around, helped them reach their full potential in their career, and directed their lives at critical moments.