TRUSSVILLE — The Trussville City Council honored the Hewitt-Trussville High School Girls Basketball Team with a proclamation during its regular meeting on Tuesday, March 13, 2021.

The Lady Huskies finished their 2020-21 season with a school-best 29-5 record. Coaches and players from the team were invited to the council meeting Tuesday night to hear the reading of the proclamation. The team made it all the way to the state championship, senior guard Amiya Payne earned the Alabama Sports Writers Association 1st Team All-State Honors, among others, and several other players including freshman guard Jordan Hunter and sophomore guard April Hooks were also named in the proclamation for their many accomplishments as athletes.

Councilor Lisa Bright read the proclamation and thanked the team for attending the meeting.

“We’re thrilled to have our girls here and their Coach [Tanya} Hunter here as well,” said Bright. “What a season they have had this year last year as well. We just want to take this time to honor you.”

The proclamation was approved unanimously.

The 2020-21 Boys Basketball Team (12 and under) was honored during the Trussville City Council’s regular meeting on Tuesday, March 13, 2021.

The 2020-21 Boys Basketball Team (12 and under) shook hands with the mayor, city clerk, and members of the Trussville City Council.

The Boys Basketball Team (12 and under), coached by Paul Phelps, which won the state championship, was also honored during the meeting. Council President Alan Taylor introduced the members of the team.

“Guys, congratulations and thank you for representing Trussville so well,” said Taylor.

This was the team’s first state championship in history.

During public comment, Mike Rowe, with ACTA, made a presentation on future goals for the theater organization. Rowe said there are three things that need to be addressed in order for ACTA to accomplish its goals. Those areas of need have been identified as education, promotion, and venue. The ACTA board plans to create a marketing committee and partner with schools to promote theater and shows. The board also wants to increase the number of shows.

“As much as we love that building there, we are at the point where we probably feel like we have outgrown the existing facility,” said Rowe.

ACTA is asking the city to help with options for storage and to partner with the board to address facility limitations and possibly consider building a new facility.

Taylor thanked Rowe for the presentation and voiced his support for ACTA.

“ACTA is a jewel in our city,” said Taylor. If you’re not going, you need to be going.”

Rowe also showed a slide explaining where ACTA is now and where it could be. Some of the concerns include more seating, expanded restrooms, separate dressing rooms, safer access to lighting and the sound booth, a concessions area as well as a ticketing area and ADA compliance.

Cynthia Anchrum, who lives on Scooter Drive also spoke during public comments. Anchrum said she is concerned about standing water in her backyard. She said the yard has been retaining water more and more over the past two years.

Mayor Buddy Choat said the city could look into the problem and see if they can fix it, as long as they do not have to access private property.

Donna Ware, who lives in the Windsong Subdivision made a second appearance in front of the council concerning issues with runoff from development in the neighboring Stockton Subdivision. Ware was speaking on behalf of several residents who attended the meeting.

At the last council meeting, resident David Livingston asked the mayor if it was possible to pull building permits from the developer, Signature Homes, while the city awaits a fix to the problem, which is being addressed by the Alabama Department of Environmental Management (ADEM).

“We like to think our neighborhood is a jewel of the city and that’s why we are so persistent in trying to help get rid of the mud that is in the Windsong Lake,” said Ware. 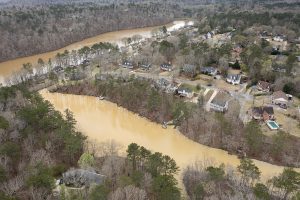 “Land disturbing activities in proximity to a lake, natural watercourse or adjacent property shall have a sufficient buffer zone to confine the siltation to the site being disturbed,” Ware read part of the ordinance.

Ware asked the city to look at enforcing the ordinance. During the last meeting, the mayor told the group he had been advised by ADEM to wait for the agency to complete its investigation and decision into the matter.

Donna Ware’s husband, Brad, who is a former attorney, also spoke up during the meeting.

Brad Ware said he wants the city to do something to prevent the sediment from going into the lakes.

“Am I missing something?” he asked.

Mayor Buddy Choat said he did not think Mr. Ware was missing anything. In fact, he said he has met with those doing work on the site about the issue. He has also been in contact with ADEM.

“There are inspections going on regularly out there,” Choat said.

Choat said ADEM informed the city it could take 60-70 days for the issue to be handled.

“We’re aware of it,” Choat added. “Again, it was a heck of a rain Friday night. We know that. I think we’re coming into a season now where if we put a stop work order on it now, going into the dry season, how will we know if it’s really working?”

The mayor promised residents that the city is watching and monitoring the situation. He said city officials have asked the developers to be specific on what changes are being made to protect the lakes and wildlife.

The mayor said he would also look into any plans by the developer to add a retention pond to the new development. He added he would ask ADEM what would happen if a stop order was issued at this time.

The council also annexed the following properties into the city of Trussville, after the requests came recommended by the city’s Planning and Zoning Committee:

In other business, a resolution to approve a bid to install the new tennis court surface was passed. Lower Brothers Tennis Courts was the sole bidder and estimated the resurfacing of the courts at the City Racquet Club would cost no more than $83,200. Money for the work will come from the Parks & Recreation Capital Outlay Section of the Fiscal Year 2021 City Budget.

The council held a first reading for an ordinance to rezone 2975 Floyd Bradford Road parcel and connected lots as R-G (Garden).

Tortorigi Development LLC requested the rezoning on behalf of the Sarinopolous family. The properties are currently zoned R-2 and R-3.

The city’s Planning and Zoning Committee recommended the council not approve the rezoning. The council will vote on the matter in a future council meeting.

A bid to upfit 10 new police vehicles was approved. The bid of $103,895 by Brasher Electronics will include department-specific equipment.

The following items were approved as part of the consent agenda: