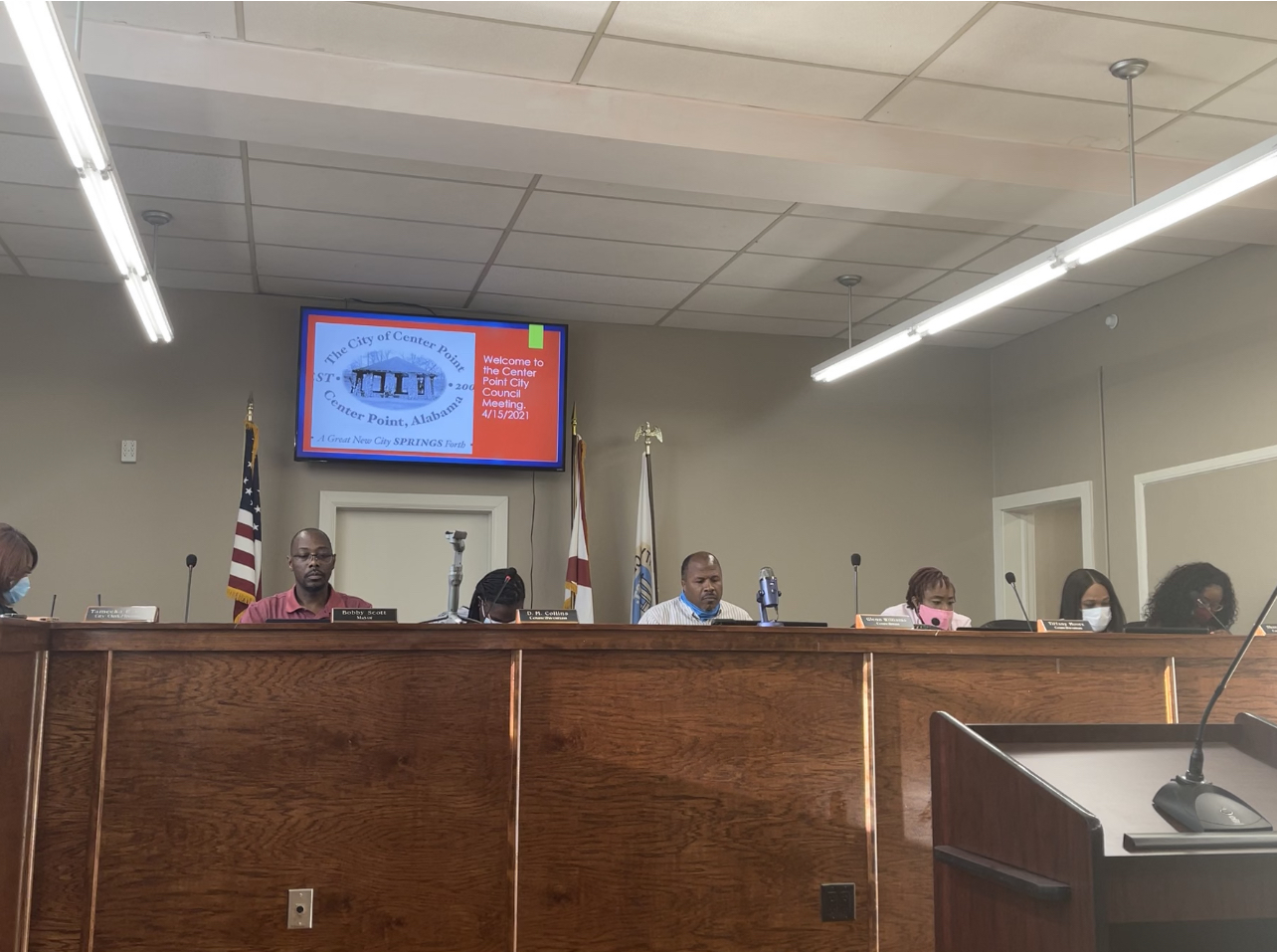 “We received a streetlight complaint from a citizen,” said Council President D.M. Collins. “The complaint was reviewed and recommended by the public clerk to upgrade the streetlights.”

The following items were also approved as part of the Consent Agenda:

During public comment, store manager Tracy Smelcer of the Neighborhood Market Walmart in Center Point said he wants his store to donate once again to the community with $6,000 in grants. The grants will be for nonprofits and schools.

Another concern Smelcer spoke about was the response time from law enforcement at his store.

Smelcer stated that at work, there is a lot of shrinkage in his store due to many situations but by the time an incident has occurred, the troublemakers are long gone due to slow response times from the sheriff’s office. Smelcer hopes one day that this issue could be resolved.

Resident Melton Madison and his wife have been in Center Point for 20 years and recently they say that they have heard a lot of noise in their area.

“The music sometimes goes down and then it goes right back up,” said Madison. We tried to contact the sheriff’s department and my suggestion is to get the sheriff to probe the area. Me and my wife are concerned about the noise and we want it to stop.”

Madison said they have called to ask the sheriff to come and surround the area about two to three times a day.
Council President D.M. Collins said there is a noise ordinance within Madison’s area. She said the city is working to get the noise controlled.

Collins and Mayor Bobby Scott said they will work together to try to get more visibility in the area by partnering with the Jefferson County Sheriff’s Office.

Resident Darla Leonard of Center Point stood to the podium to complain about people speeding in her area.

“People are speeding through the residential streets, like flying, and neighbors have mentioned that was a concern to them,” said Leonard. “I have a young grandbaby and an older one, and it’s really not a safe thing. I don’t want to generalize people, but I would say it’s younger people.”

Leonard went on to mention that she is very happy about the streetlights in her area because before it was pitch dark.

Leonard also made another complaint about loose dogs and the noise disturbance from her neighbors within in her neighborhood.

“The dogs are loose, and I have to check my surroundings, neighbors will just let the dogs be without a leash,” said Leonard. “Your dog wont bite you, but me I’m not so sure. I also hear loud music in the mornings, and I have to be cautious about calling the police because you know how young people can be. There have been shootings that have been happening and I know the bullets go up, but you don’t know where they are coming down to and I just feel unsafe. Due to renters in the area, I would recommend the police to patrol.”

Collins said they have a noise ordinance in Leonard’s area, and they have a code enforcement officer that they will send out to get a good eye on the people and put the issues to rest.

Leonard suggests that maybe there needs to be an insert that is put in the mailboxes to let neighbors know that there will be a fine for the loud noise or loose dogs.

In mayor and council reports, Councilor Glenn Williams says there are a lot of sports activities mainly baseball events this weekend and he encouraged residents to check the calendar on the website for more information.

Councilor Tiffany Moore talked about the public neighborhood watch program. She briefly went over the statistics for the city’s crime which are from April 3 through April 9.

“I have been in contact with Chief Mason because we get this information weekly and he is working on finding out more information because I just want to make sure what I’m reporting to you all is factual and to make sure we are being as transparent as we can be about the things that are taking place in our city because my initial thoughts as I received these updates from Mayor Scott is, that this can’t be it because based on what the perception of the city says you would think these statistics would look much differently,” said Moore.

The Center Point City Council is registered nationally for the Neighborhood Watch Program and Moore is currently working with residents who have signed up and she encourages others who are interested to email her and spread the word.

Mayor Scott referenced the new website, which residents can receive alerts from the mayor and city council, and he reminded residents about the sports events coming up this weekend.

Earth Day Clean-up will be held on April 24.

Scott also spoke about a flower giveaway on April 24 in honor of Mrs. Cherry Palmer, who worked for the city and was killed in 2018 while on duty.

Collins reminded residents about the city’s new website, www.cityofcenterpoint.org and encouraged residents to check out the features that are available to the community.