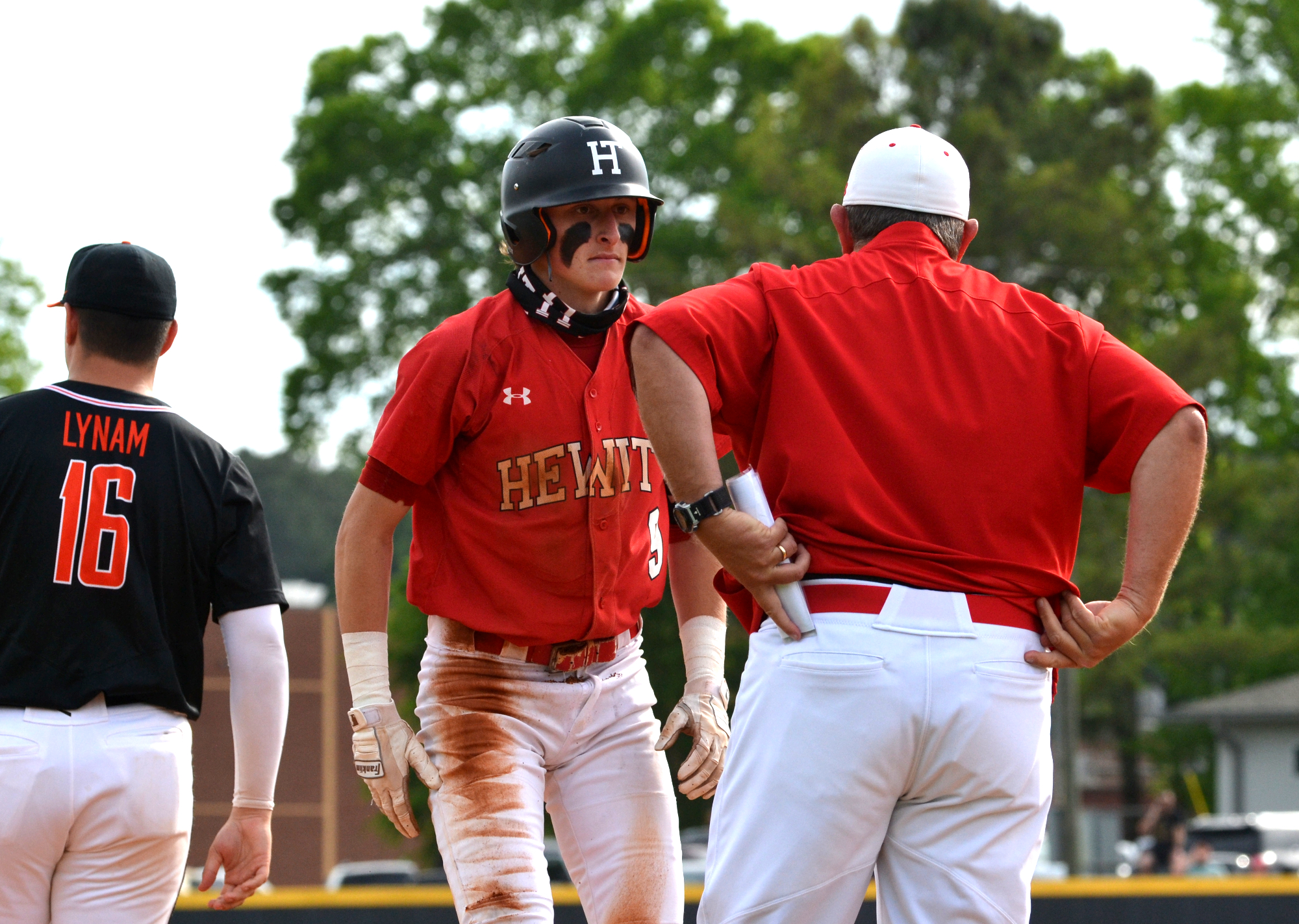 Hewitt-Trussville's Ethan Duhon listens to coach Jeff Mauldin after reaching third base during a game on April 30, 2021. Photo by Erik Harris

No. 1 Hewitt-Trussville sweeps Grissom to advance into 7A quarters

The No. 1-ranked Hewitt-Trussville baseball team opened up its postseason run at home on Friday with a two-game sweep of Grissom. The Huskies (28-4) followed a 3-2 win in the early session with a 6-3 series clincher in the nightcap to march into the Class 7A quarterfinals. 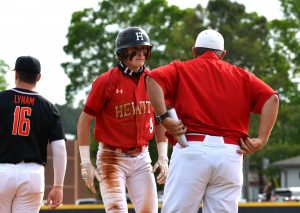 Hewitt-Trussville’s Ethan Duhon listens to coach Jeff Mauldin after reaching third base during a game on April 30, 2021.
Photo by Erik Harris

The Area 6 champions will host Hoover next week in the second round after the Bucs swept sixth-ranked Bob Jones on Friday night.

“We haven’t played them this year, but this is what you want in the playoffs,” said Hewitt-Trussville pitcher Skylar Jones. “You want to play the best of the best. It makes me want to get after them.”

After trailing for most of the afternoon, Hewitt rallied in the final two frames to capture the series opener, 3-2.

The game went into the bottom of the seventh even at 2-2 before Brooks McRae bunted into an infield throwing error that sent the ball rolling into foul territory down the right-field line, allowing pinch runner Jackson Cole to score the game-winning run from second.

Dylan Overby led off the inning with a line-single into center field and Jackson Ollis bunted into the first error of the inning before McRae got his game-winning bunt down.

“I’m just proud of our team for fighting every at-bat and every pitch,” said Hewitt-Trussville head coach Jeff Mauldin. “When you get to this point in the season, everybody has earned the right to be here, everybody is good. Those guys (Grissom) are really, really good. So I was proud of our guys for fighting.”

It was however, the Tigers that claimed a 2-0 advantage after loading the bases with no outs in the fourth. Charlie Cassingham started the scoring with an RBI single into right and Jack Carson followed with a sacrifice fly into center field.

That two-run lead would hold until the bottom of the sixth when Hewitt-Trussville catcher Matt Miller evened things up at 2-all with a two-out, two-run single into left field. Miller first chased Tigers’ starter John Stogner with a long shot to left that carried foul. He then welcomed relief pitcher Rynzo Crutcher to the game with his game-tying single.

Stoger tossed five scoreless innings for Grissom and lasted 5 ⅔ innings with six strikeouts and one walk. On the other side, Huskies righty Riley Quick fired a complete game with nine strikeouts, two walks and six hits allowed. Quick held the Tigers scoreless in all but the fourth inning when the visitors jumped out to a 2-0 advantage.

The big right-hander worked out of a third-inning jam when Grissom put runners on second and third with no outs. Quick escaped by punching out the next three batters to hold a scoreless tie.

“You can’t say enough about our two guys that pitched,” said Mauldin. “They pitched with a lot of heart tonight.”

Hewitt-Trussville managed four hits in the afternoon session thanks to singles from Miller, Overby, Ethan Duhon and Jackson Holland. 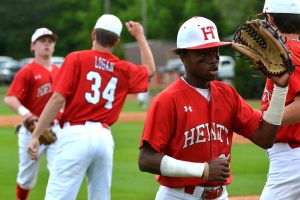 Hewitt-Trussville center fielder Trey Burrell trots back into the dugout during a playoff game on April 30, 2021.
Photo by Erik Harris

Offense came a little easier in the nightcap, but Hewitt-Trussville still needed three runs in the eighth to complete the Friday-night sweep at Phil English Field.

Game 2 went into extras tied at 3-3, and that’s when the Huskies came alive.

Jackson Holland barreled up the go-ahead sacrifice fly, which floated into center field, allowing Trey Burrell to tag up from third and beat the throw home for a 4-3 cushion. Miller extended the inning with a little insurance in the form of an RBI line into right, which was followed by a run-scoring single off the bat of McRae.

The Huskies went into the bottom-half with a three-run cushion and senior starter Skylar Jones closed the door. The righty capped off a stellar night by striking out the side to bag a complete game effort with 11 strikeouts, two walks and five hits allowed in eight innings pitched.

“The best inning of his night was the eighth inning,” said Mauldin. “He was stong and that’s kudos for him for how he prepares as far as lifting weights and our running program and how he prepares himself to be able to do something like that tonight.”

The Huskies wasted no time giving Jones a lead, as Holland slapped home Burrell, who started the first with a single up the middle. Hewitt extended the early lead to 2-0 in the top of the second when Grissom, once again, struggled to defend a bunt. The ball was thrown out of play on the delivery to first, allowing a second run in.

Grissom put together a two-out rally in the bottom of the second to lock things back up at 2-2. Christian Sutphin started the rally with a run-scoring single to the right side and later scored the equalizer when a throw from right field snuck by Miller at the plate.

The Huskies took advantage of two straight hit-by-pitches in the top of the fifth, as Kizer touched an RBI fielder’s choice to second for a 3-2 lead. But Grissom answered again, this time on an RBI groundout to shortstop in the sixth.

“I don’t think we played our absolute best tonight, but that’s what happens when you play another team that kind of puts you in situations where you don’t play your best,” said Mauldin.