TRUSSVILLE — A pursuit led by troopers with the Alabama Law Enforcement Agency (ALEA) ended in a crash in Trussville on Saturday, May 1, 2021.

St. Clair County deputies attempted to pull over a motorcycle but the driver refused to stop and fled.

“A Bolo was issued and an officer with ALEA located the motorcycle near the Grand River Outlet Mall,” the Sheriff’s Office said in a press release. “The motorcycle was pursued by ALEA into Trussville where the driver lost control.”

The chase ended in the 2800 block of Queenstown Road, just before 3 p.m.

Troopers said law enforcement officers were chasing the person because he had outstanding warrants and a revoked license. The man was driving a Yamaha sport bike. Deputies with the St. Clair County Sheriff’s Office and officers with the Trussville Police Department were on the scene of the crash, along with two State Troopers.

Trussville Fire and Rescue also responded to the scene to evaluate the driver. Troopers said he was transported to St. Vincent’s East with minor injuries. 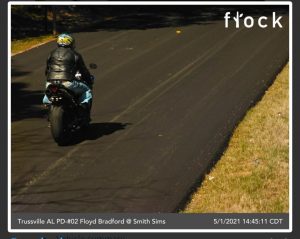