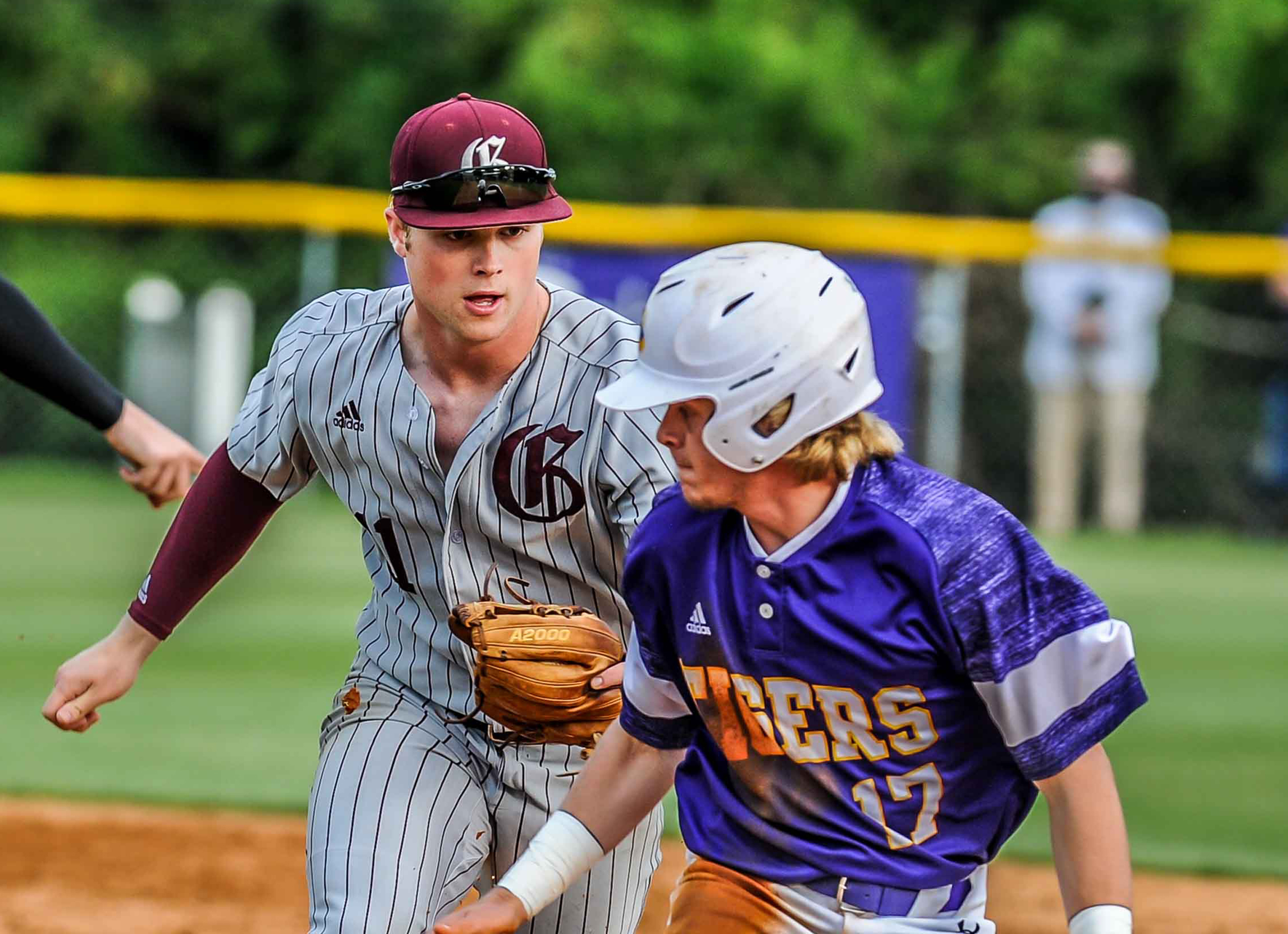 Springville's Jake Ballard (17) gets caught in a rundown during a second-round playoff series on April 30, 2021. Photo by Vickie Unlap

SPRINGVILLE — Baseball season has come to an end in Springville following a pair of losses to Gardendale on Friday in the second round of the Class 6A playoffs.

The Rockets swept the road set 6-3 and 6-2 to advance into the state quarterfinals for the second straight season (no postseason play was allowed in 2020 due to COVID-19).

Gardendale awaits the winner of No. 3 Cullman vs. No. 7 Chelsea next week in the third round. Those two will play a decisive Game 3 on Saturday after splitting Friday’s doubleheader.

Springville (22-13) ends its first season in Class 6A as the Area 13 runner-up. The Tigers also notched a first-round sweep at Fort Payne last Friday and were winners in nine of their last 11 games going into the Gardendale series. 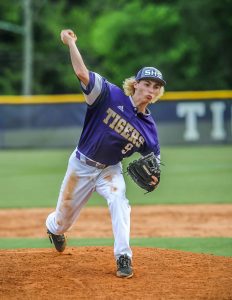 A balanced offense spurred Gardendale to a 6-3 win in Friday’s opener, as the Rockets scattered 13 hits and scored in five of the seven innings played. All nine players in the Gardendale order delivered at least one hit, including a three-hit game from Ty McGraw and two-hit games from Presley Walker and Juan Morales.

It was Springville that jumped out front 2-1 in the third thanks to a leadoff walk and back-to-back hits from Parker Wells and Ethan Davis. Wells tripled into right field for the team’s first RBI of the series and Davis followed with a run-scoring single back up the middle.

However, Gardendale rebounded with two more runs in the top of the fourth and tacked on single runs in the fifth, sixth and seventh to claim a 1-0 series lead.

The Tigers were led by the top three in their order (Wells, Davis and Jake Goolsby), who combined for all six of the team’s hits. 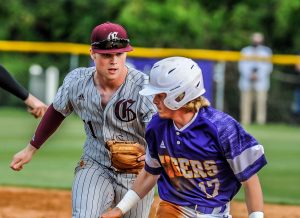 Springville’s Jake Ballard (17) gets caught in a rundown during a second-round playoff series on April 30, 2021.
Photo by Vickie Unlap

Gardendale’s bats were a little quieter in the nightcap, dropping from 13 hits in the opener to six hits in the finale, but the run total remained the same as the Rockets came through with a 6-2 victory.

Springville crossed both of its runs in the top of the first with Goolsby and Caleb McCarty going back-to-back with RBIs, but that would be all the Tigers could manage against Gardendale pitcher Daniel Bradley, who struck out six and surrendered five hits in seven innings.

For the Rockets, McGraw and Josh Wilson both finished with two hits to go with one hit and two RBIs from Morales. Gardendale tied the game at 2 in the third and went on to score in each of its next three plate appearances to pull the game out of reach.