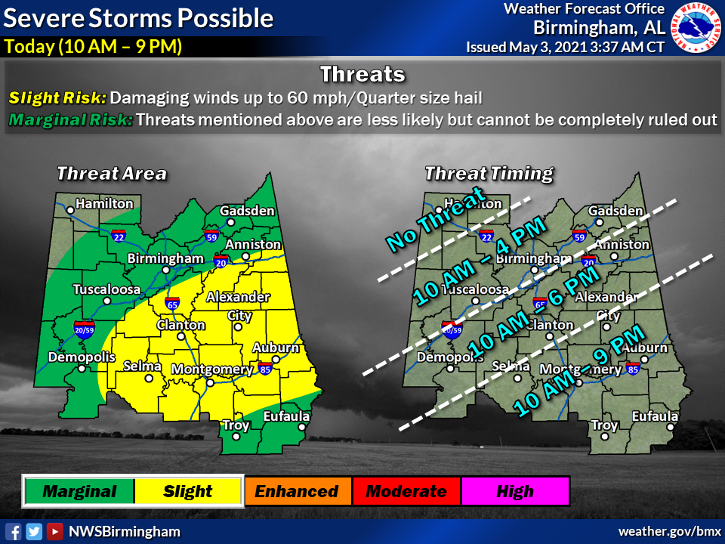 Chance of strong and severe storms today and tomorrow

BIRMINGHAM — Much of central Alabama is set up for a messy day Monday and the possibility of severe storms. The threat continues into Tuesday, with an increased threat.

Monday – A risk of severe storms exists. Jefferson and St. Clair Counties are in the marginal risk area. The system could bring large hail and damaging winds of up to 60 mph. There is a higher chance for severe storms along and south of Interstate 20. The threat will continue into the evening hours. Throughout the day, you can expect mostly cloudy skies and highs in the upper 70s and mid-80s. 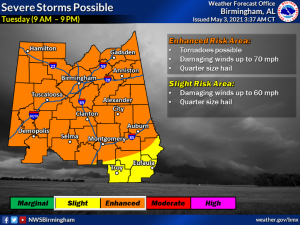 Tuesday – Tuesday the risk increases greatly for many areas in central Alabama. Stronger storms packing a larger possibility for severe thunderstorms are possible Tuesday and Tuesday evening. The threats include winds of up to 70 mph, quarter-size hail and isolated tornadoes. Jefferson and St. Clair Counties are in the enhanced risk area, along with several other counties. Everyone should watch for widespread showers and storms that will also bring the threat of straight-line winds. The NWS said the main threat will begin after 10 a.m. Tuesday will be mostly cloudy with lows around 65.

Wednesday – Showers are also expected Wednesday and there will be a chance of thunderstorms after 8 a.m. Wind gusts of 15 mph are possible.

Everyone in central Alabama should ensure they have multiple ways to receive weather warnings and alerts. Be sure to have a plan that includes where to go when your area is in the polygon. It is recommended to identify a place indoors, on the lowest floor and away from windows, preferably in the center of the structure, in case of a tornado. Be sure to have a helmet, shoes or boots and a whistle. The whistle will help alert first responders if you become trapped in debris.